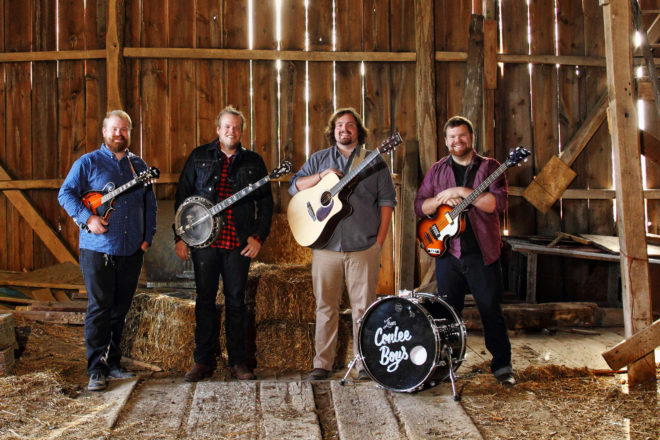 Summer camp is a magical place for many people. When you’re there, surrounded by your peers and isolated in a natural setting, it’s almost as if reality is suspended. It’s a place to make fast friends and unforgettable memories.

For Soren Staff and Beau Janke, camp was the place where their friendship and their musical partnership began.

Janke had taken banjo lessons and Staff was a self-taught guitarist. During their down time, they came together to play.

“Beau and I met working at a summer camp in northern Wisconsin as camp counselors,” Staff recalled. “It was a weekly camp, so the kids would come on Sundays and leave Fridays. After the kids left we would jam, release a little bit of that built-up tension and de-stress.”

The following summer, Staff’s brother Jens worked at the camp as well, bringing along his mandolin. In 2013, after a summer of strumming and singing together, the trio recorded an EP under the name Them Coulee Boys.

The final band member joined the crew in 2014. Michael Aschbacher was another friend working at camp who jumped into the fray as the band’s rhythm section, playing both bass and kick drum.

The band is still actively involved in the summer camp scene, though their counseling days have gone. In partnership with local churches, Them Coulee Boys has put on a few concerts to raise funds for campers. Half of the proceeds from these performances go toward paying tuition fees for future campers.

“Camp’s an important spot for us,” Soren explained. “It was a formative time for us. When you’re working there with individuals your age you feel like you’re doing a lot of good work in kids’ lives. We want to give back because that’s where we got our start.”

The last of these fundraising events, which took place earlier this year, raised more than $1,000.

Them Coulee Boys released their first studio album, Dancing in the Dim Light, on June 28. For their first album, I Never Lied About Being in Love, the band chose to record themselves, but opted this time to record at Pine Hollow Audio in Eau Claire.

“Our first record was very folky, bare bones, which at the time was what we wanted to do,” said Soren. “In the past we had mandolin, banjo, guitar, bass. Now we have electric banjo, piano, drums. It’s a different palette.”

In addition to an expanded instrument lineup, Soren explained the writing for Dancing in the Dim Light has grown up, making for a more complex album overall.

“They say for your first record you have your whole life to write about,” he said. “The second record you have to make a statement. We wanted to make sure we were saying the right things.”

Another challenge for the Americana band was adjusting to a professional studio setting.

“We were in a very different environment than we’re usually in,” Soren remarked. “It’s hard to do this very personal work in a spot that we didn’t necessarily know…but, we adapted. It overall turned into a really fun process.”

Along with their first studio album, the band filmed their first music video for “The Mask,” a track off their latest release. The short combines the seriousness of a country western standoff with sub sandwiches, incorporating the goofy humor that the band members are known for.

“We poke fun at each other and try to let people connect that way,” Soren said. “We said if this was going to be the first [music video], we wanted one that represented Them Coulee Boys.”

So what’s next on the docket for the foursome? They are currently in the process of transitioning to a full-time band and looking ahead to their next album release.

“We did some live tracks, so we may do a live album around Christmas,” Soren said. “But I’m always writing, we’re always writing. So it’s not out of the question that we’ll be back in the studio this winter.”

Them Coulee Boys will perform at Door County Brewing Co. at 7 pm on July 16.