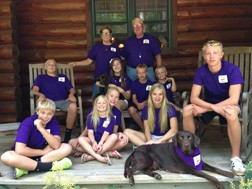 Oh, we’re the kids from Cousins Camp you’ve heard so much about.

The forest creatures run and hide whenever we go out.

We’re not a bit embarrassed by the crazy things we do.

Since 2007, the youngsters from Madison and Muskego, Wis., and suburban St. Louis, Missouri, have been spending time together each summer at Cousins Camp, “where cousins become best friends.” This year, the events centered at Cenopach Lodge, the Kaldor home deep in Door County woods.

Cenopach means “place of peace,” and the campers, whose ages range from seven to 16, are expected to maintain that feeling. Their invitations included a few basic ground rules: “Campers will be expected to respond positively to requests from Grandma and Grandpa. There can be no hitting, biting, spitting, physical/verbal abuse or whining.” On the day the group was interviewed and photographed, their behavior was exemplary, and their affection for one another was obvious. Pat says one of her favorite memories is when one group couldn’t find a bird’s nest on a scavenger hunt, Amos, from another team, made one for them. They were proud to have worked together so they could all win.

The brightly-colored invitations designed by Dennis promised that the days would include such perennial favorites as a shaving cream fight, sleep-outs in the Camp Kaldor cabin in the woods, swimming at Nicolet Bay and the Baileys Harbor beach, campfires, a scavenger hunt, ATV rides, a pontoon boat ride/swim, rope maze, arts and crafts, driveway chalk art, miniature golf, horseback riding and driveway showers, along with the new activities of disc golf, a trip to a water park slide and skit night. Many of the activities earn points for participants in the Cousins Camp Olympics.

Campers this year included Kaldors from Madison: Amos, 16; Gracie, 14; Mary, 12; and Simon, 10. Kaldors from Muskego: Nik, 16; and Kirk, 13; Katie Sullivan, 16; and McDougells from Fenton, Missouri: Oliver, 9; and Maggie, 7. When they leave the house, each camper is assigned a buddy, the oldest being responsible for the youngest, second oldest for the second youngest, etc. Still, despite the buddy system and the constant counting of heads by the grandparents, there’s the occasional briefly misplaced child – as when Simon, at age 5, turned up happily digging in the sand at Nicolet Bay, while everyone searched for him elsewhere.

This year the closing ceremony included a special feature. Each camper lit a Chinese lantern that floated away in the twilight, as the family and neighbors gathered to watch.

As of 9 pm, Aug. 10, the day parents returned to pick up their campers, Grandma and Grandpa Kaldor went “off duty,” and parents resumed responsibility for their children. Hopefully, they’ll all meet again on Dec. 26, when the entire family of 20 traditionally gathers to celebrate a second Christmas at Cenopach Lodge.

Dennis is writing a book about the Cousins Camp in response to a number of requests. Pat will add sections on crafts and quiet time spiritual sessions. And the grandchildren, whether they realize it or not, are creating memories that will last a lifetime.