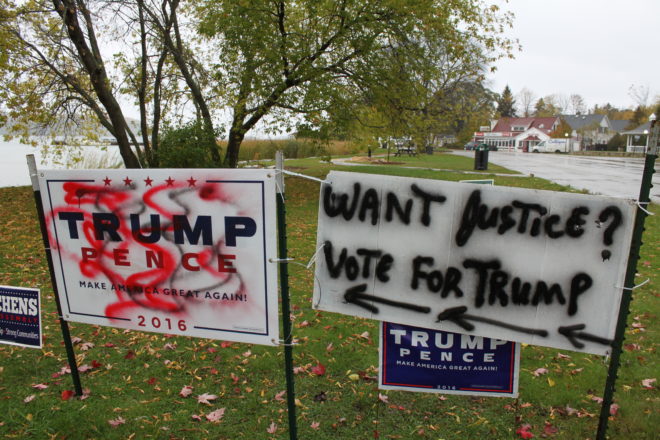 Across the street from the Hillside Inn in downtown Ephraim sits a campaign sign for White House hopefuls Donald Trump and Mike Pence. The sign is hastily painted over with orange spray paint. Next to the campaign sign is another sign, a response to the vandalism stating, “Want Justice? Vote For Trump” in black spray paint. A similar dueling of signs sits on the corner of Hwy. 57 and Settlement Road.

“There’s always been some [vandalism],” said William Berglund, chair of the Door County Republicans. “But this one, especially this, is past common.”

In Wisconsin, the theft or defacement of campaign signs comes with up to a $100 fine, but the charges can be extended in some cases to include criminal damage to private property.

“The devil is always in the details,” said Ray Pelrine, Door County District Attorney. “You can clearly recognize the difference between people who are paid by a campaign who go out and steal 100 signs. That’s different than some 16-year-olds going out and spray painting some signs.”

When it comes to graffiti or destruction of campaign signs that are private property, in most cases it will be considered a Class A misdemeanor, with the potential jail sentence of nine months and a $10,000 fine. Rarely will campaign sign damage reach the felony threshold of property valued at more than $2,500.

“I don’t understand that they can’t get it through their heads that that’s a criminal offense, to steal them or to deface them,” said Berglund.

The Door County Sheriff’s Department has received four reports of theft of campaign signs, but that does not include reports in the City of Sturgeon Bay. In many cases, theft or defacement of signs is not reported.

Berglund credits the perceived rise in campaign sign vandalism to the polarization of both presidential candidates.

“I’ve been doing this for a lot of years but this is certainly the strangest campaign that we’ve seen and both candidates are polarizing figures,” said Berglund. “When you look at our Republican candidate, he’s pretty bombastic. But he’s exciting to people, he’s got them coming out.”

While Door County is dealing primarily with the defacement of Trump signs, elsewhere in Wisconsin it’s the Democrats who are fighting vandals. In Portage County, the Stevens Point City Times reported the destruction of 10 handmade wooden signs in support of Hillary Clinton and Tim Kaine. Russ Feingold signs have also taken a beating in Fond du Lac.

Vandalism or theft of campaign signs is understood as a suppression of the constitutional right of free speech. Instead of graffiti and destruction of private property aimed at silencing the opinions of neighbors, polls will be open from 7am to 8pm on Nov. 8.