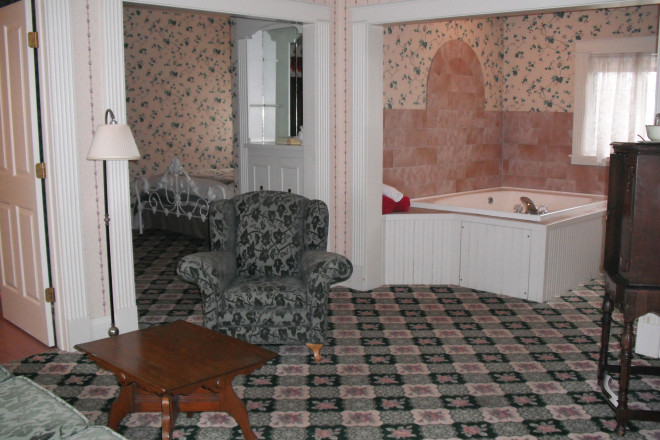 Eighteen months of negotiating, $3,000 worth of legal fees and a $32,500 foreclosure find has brought Jacinda Duffin full circle – from the first 650-square-foot home she owned in her 20s, to a three-bedroom home, to a four-bedroom and, now, back down to a 550-square-foot primary residence in downtown Sturgeon Bay. “To most people, success means building up,” Duffin laughs, “but lately, for me, it’s meant scaling down.” 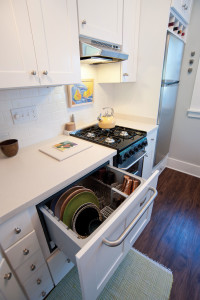 Many don’t regard 550 square feet as ample living space, but Duffin is both purposeful and philosophical about the decision to downsize. “Small space living forces you to live in the moment,” says Duffin. “You can’t buy lots of big things as there is no place to store them. It’s kind of like just-in-time manufacturing where you’re one step ahead of your needs.”

As a broker with True North Real Estate in Fish Creek, Duffin has access to new real estate listings in Door County, and she kept an eye out for a small space with character and potential. So, when a Barbican Condominium unit came on the market, she went to see it on the first day.

Originally the N.R. Lee House, one of three historic Sturgeon Bay homes that Lee built on Second Avenue for his daughters, the building has had several incarnations in its 120-year history, including use as a vacation condo rental, a bed & breakfast (for which it is most recently known; the neighboring buildings, in fact, still operate as the Barbican Olde English Guest House) and as the “Corner House” that once faced Kentucky Street.

The building is a medley of construction, with different sections reflecting the various eras in which they were added, but it was the former Corner House, a one-story section tucked into the middle of the building, that caught Duffin’s imagination. “I’ve always been a believer in paying more for natural light,” says Duffin. “More than any other quality in a home, natural light can make or break the feel of a space. Well-lit small spaces can have the psychological effect of large spaces.” 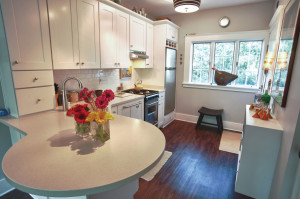 The unit, zoned for mixed residential and commercial purposes, first needed to be converted from transient occupancy to permanent living quarters, which required petitioning at the state level. With the legalities taken care of, Duffin then contacted accomplished builder Tom Utzinger of TC Carpentry to undertake the project of converting the non-traditional space into a permanent residence.

Duffin and Utzinger faced three primary challenges. First, the two needed to find ways to bring both the dated décor and the space, neglected due to the foreclosure process, into the 21st century. This would involve more than simply eliminating the flowery fuchsia and green wallpaper and carpeting covering every square inch; it also meant tackling plumbing and electric issues and hauling out the large Jacuzzi in the living area to make room for a kitchen.

Second, they needed to collaborate on the highly creative, and often frustrating, task of making such a small space both functional and comfortably livable. (To give you an idea of just how small 550 square feet is, consider that in 2009 the average American home was 2,700 square feet, according to the National Association of Homebuilders.) 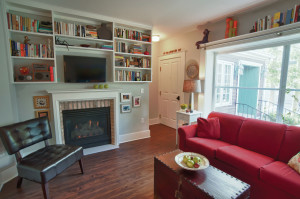 In the kitchen, where the creativity is most evident, they paired stock cabinetry – custom-fit – with scaled-down appliances found at A.J. Madison, out of Brooklyn, New York to achieve the effect of a higher-end remodel. A Fisher Paykel cabinet-front dish drawer, a Summit stainless steel commercial gas range measuring 20 inches, and a 14-inch by 16-inch corner sink (smaller but deeper, at nine inches, than a regular kitchen sink) were geometrically and painstakingly arranged into an area no bigger than a compact car.

No square inch was spared. Above and below the cabinets are storage areas. Mini-drawers, big enough for spices, utensils, etc., are craftily stacked between the sink area and the dish drawer. Duffin recalls receiving an enthusiastic call from Utzinger midway through the project. “Great news,” he said. “I found four extra inches. Now we have room for a small pantry!”

The third challenge – the ultimate kicker for any home remodel – was bringing the project to fruition on a budget. Wary of over-improving, often the demise of eager homeowners, Duffin put a strict $12,000 cap on the kitchen alone. Utzinger quips, “The big trick was to combine all the desired elements and stay within the budget. It’s easier to do that with a $100,000 kitchen.” 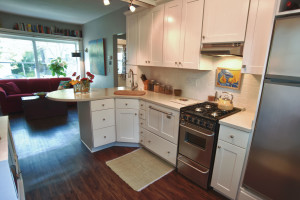 In addition to dollars, Duffin also contributed a great amount of sweat equity to keep costs down by stripping wallpaper, painting and a host of other tasks. All told, the renovations came in around $30,000 – a modest figure relative to any other substantial remodeling project. “It’s important to have vision,” says Duffin, “but then the trick is the design and the craftsmanship. I think you’re better off paying for a collaborative carpenter who’s willing to listen and change horses mid-stream – especially when working with a quirky and challenging space.”

The end result is that, while the condo is indeed a very small space, it does not lack the creature comforts of a full-sized home. The residence features ample natural light from both northern and southern exposures, a washer and dryer, a fireplace (with a flat screen TV positioned above), and a kitchen counter that seats two (or cozily four) and doubles as a desk, with electric outlets conveniently tucked into an adjacent cabinet.

The bedroom accommodates a queen-sized bed and will eventually connect to a walk-in closet during a phase two renovation Duffin is already plotting. And last but not least, the residence is in the epicenter of Sturgeon Bay, affording walking access to nearby restaurants, stores, and the waterfront.

“Many homes are built on a 19th century farmhouse design in which you have everything for all seasons in one place,” says Utzinger. “We don’t have to live like that anymore.”