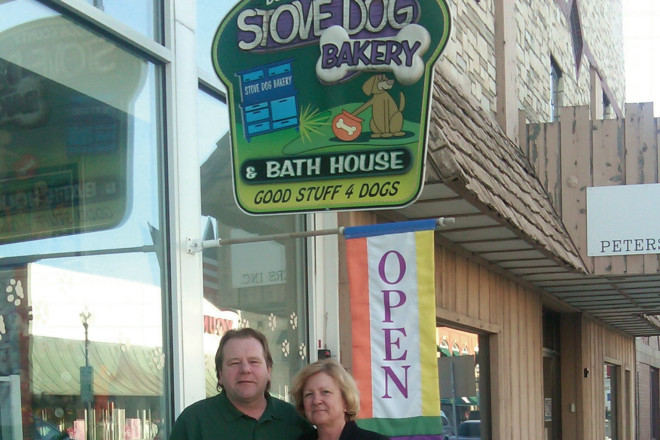 Since the inception of the “On Your Plate” department in Door County Living, it has been the usual custom for a restaurant, chef, or local food to be featured. Of course, while going out to various eateries of the peninsula might seem commonplace to us, our pets who are stuck at home might ask (if they could talk, of course) why their owners get to have all the fun. An enterprising couple in Sturgeon Bay shared the same thought, and sought to create treats for pets that were not only good, but also good for them as well. Welcome to the story of Sturgeon Bay’s Stove Dog Bakery. 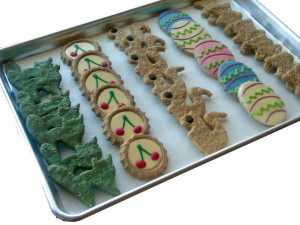 Stove Dog was founded in 1998 when Dan and Chris Saurer began baking their all-natural dog treats and selling them at farmer’s markets throughout Wisconsin as well as on the Internet. The impetus for creating the treats was simple. “In caring for our older dog, Sam, it became obvious that there was a need for more health-conscious dog treats,” Chris says. “Dogs are prone to many of the same health concerns that humans are. We wanted our dogs to continue being healthy – and knew there was a public out there that wanted the same for their pets.”

Knowing virtually nothing about the business of creating and baking dog treats when they began their endeavor, the Saurers decided to dive into the research process. “We read a lot of books on animal nutrition, talked to a lot of knowledgeable people, and checked out a lot of articles on the Internet,” says Dan. Then, the recipe search began, and the two found they didn’t have to look much further than the recipe cards of their own family. The first recipe attempted was that of Chris’s Aunty Ree’s muffins. Chris omitted the sugars and salt that the muffins called for, and found that the altered recipe would be perfect for the dog treats.

From there, diabetic and sugar-free recipes were researched, and the Saurers quickly got the swing of dog-treat baking. “Our recipes evolved over time,” Chris says. Today, the Saurers depend on Asta and Charley, their two Golden Retrievers, to help taste-test the recipes. “They’re always more than willing!” Chris laughs.

Stove Dog got its start in Door County when Larry and Eunice Manz, owners of Manz Specialty Foods, gave the Saurers a small corner of their store to sell their products. The treats took off and a few years after that they opened up a storefront on Sturgeon Bay’s Third Avenue. They operated in that location until this April, when they purchased the former Perry’s Cherry Diner building on Michigan Avenue. The new location will allow the Saurers to operate their business and bake Stove Dog’s treats in the same location (in the past, the treats have been baked off site). “To be honest, the smell of dog treats baking was the one thing that was missing from the previous location.” says Chris.

The Saurers seek to keep the ingredients of their dog treats simple, using many ingredients that humans already consume a fair amount of – peanut butter, whole-wheat flour, brown rice, rolled oats, and unsweetened applesauce. “Our pets don’t deserve anything less than we ourselves would eat,” Chris says. Of course, there are a few small ingredient swaps – a bit of carob instead of any chocolate – as well as added ingredients depending on the kind of treat. “For something breath-freshening we’ll most likely add some peppermint, and we do feature a special treat called the ‘Flea-Buster Bagel,’ which features brewer’s yeast and garlic, which are both natural flea deterrents,” Dan says.

The treats are all natural, but that doesn’t stop the Saurers from creating treats that sound mouth-watering even to humans. The bakery offers two kinds of “Fetch Fries” in pizza and sweet potato flavors, as well as other signature flavors such as Banana Bites, Pizza Bites, Pumpkin Bites, and Beef Bites. In addition to the treats that the Saurers bake themselves, they also offer a number of treats that are produced by other companies – the caveat being that these companies adhere to their own mission of making the treats healthful. “We order from a company that produces a great line of doggie doughnuts and tartlets, with frosting that is yogurt-based,” Chris says. The company also has seasonal treats and flavors, so it’s entirely possible to gift one’s dog with a baseball or birthday cake-shaped treat.

Stove Dog even has gifts for the most special dog occasion. “We have ‘Celebration Cupcakes’ that our customers like to buy for a dog’s birthday, or when their puppy graduates from dog obedience school,” Dan says. “Dogs should be able to celebrate milestones just like we do.” And cat owners shouldn’t feel left out either; Chris has a special Chicken Liver Brownie recipe that has been a proven hit with all felines.

Stove Dog also stocks a small variety of all-natural, holistic dog and cat foods. These dog foods range from fresh to frozen to freeze-dried, and all of them are rated high in the Whole Dog Journal, a monthly magazine that informs dog owners about natural care and training.

In addition to food and treats for dogs and cats, Stove Dog also stocks a comprehensive variety of anything and everything a dog or cat owner might need – food and water bowls, leashes, collars, dog beds, books on obedience, and more. The store welcomes four-legged friends, and a colorful sign on the front door tells dogs to bring their owners in to browse. “Dogs are shoppers, for sure!” laughs Chris. “There’s a lot of sniffing that goes on – they check out every bowl on the floor. I think they’re hoping there might be a treat in one of them.” The store also features a bathhouse where pet owners can either wash their dogs themselves or have Dan professionally groom them.

Chris says that two things often surprise people when they stop in at Stove Dog, the first being how reasonable the prices are. “Often times, organic or all-natural pet items are expensive, but we really try to keep our prices moderate,” she says. Bags of treats are between $7 and $9, and can last quite a while. The larger treats begin at $3. The second item is the treats themselves. “Many people come in and see that we offer frozen dog treats, or they see the little tartlets in the case and are surprised that we offer things like this, or that the treats look that fancy,” Chris says. “But personally, I don’t think our pets deserve anything less.”

Stove Dog Bakery is located at 230 Michigan Street in Sturgeon Bay. For more information on Stove Dog and its products, visit their Web site at www.doorcountydogs.com or call (920) 746-9000.

Stove Dog Bakery’s Web site, www.doorcountydogs.com, offers more than just information about their treats and store. “We get asked by people who come into the store for advice on the best place to take their dogs while they’re on vacation,” Dan Saurer says. “So we decided to incorporate that into our Web site.” On it is a list of Chris-and-Dan-recommended places that one can take their dog to walk, swim, and play, along with a list of dog-friendly establishments in Door County.