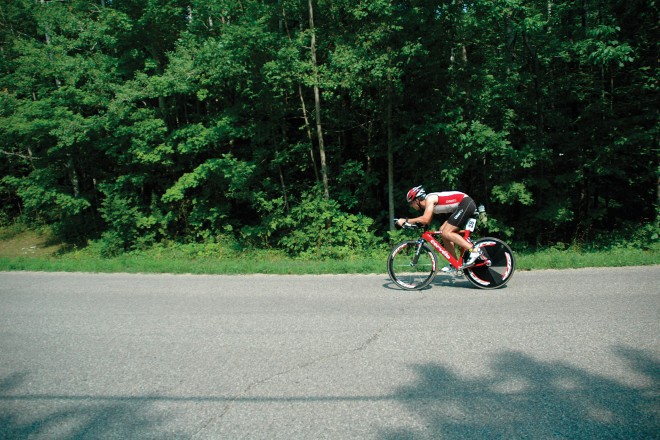 With hundreds of miles of coastline, and thousands of open and protected acres, the Door County peninsula has long been an attraction to those who love and appreciate outdoor activities and adventures. Boaters, bathers, bikers and hikers have been drawn to the area for many years to take advantage of the ample land and water access on an informal basis.

In July 2005, an organized athletic event made its debut in the county, and based on the enthusiastic response to the inaugural year and the pending second annual iteration, the Door County Triathlon was almost overdue.

Last year, 600 people registered for – and 500 finished – the first annual Door County Triathlon in Egg Harbor. The first triathlon drew not only participants from around Wisconsin as well as nearby Illinois and Minnesota, but also from as far away as Georgia, Colorado and California. According to event coordinator Sean Ryan, “Participants had nothing but outstanding comments. Door County was an ideal location for a triathlon.”

The Second Annual Door County Triathlon will take place on Sunday, July 23, 2006. The event begins and ends in Frank Murphy County Park, about three miles south of Egg Harbor on Horseshoe Bay, and offers a full length international triathlon course, as well as a shorter course for those with a little less ambition or who are new to the sport.

The short course (or ?sprint? distance) includes a one-quarter mile swim, followed by an 11-mile bike ride and a 3.1-mile (5K) run. Ryan emphasizes that both the bike and run sections of the short course are on an extremely flat course, making it perfect for the beginning triathlete. “The bike course travels down and back on Bayshore Drive [County Highway B],” he says.?“The run course travels up and back on Horseshoe Bay Road [County Highway G].”

The different courses are designed, according to Ryan, to “attract two distinct classes of competitors. The short course is extremely first-timer friendly.” The long course, on the other hand, Ryan describes as “one of the most challenging Olympic-distance courses in the Midwest.”

The long course begins with a 1.5K (0.93 mile) swim in the waters of Green Bay. Both the bike and run courses that follow include climbs up the famed Door County bluffs, giving rise to the official event slogan: “Can’t Bluff the Bluff.” The 25.7-mile (41K) bike course travels down Bayshore Drive and passes many scenic highlights.? The 6.2-mile run course travels north on Horseshoe Bay Road, climbs Bluff Pass Road and goes through Horseshoe Bay Farms & Golf Course before a downhill race to the finish line.

“Yeah, we really take them up the bluff,” says Ryan proudly. “The bike ride at Mile 12 starts climbing 230 vertical feet over four miles. The run course at Mile 2.5 goes up Bluff Pass Road, [which rises] 180 vertical feet in half a mile. It’s an extremely steep uphill climb.”

While Ryan, who grew up in Green Bay, is the event coordinator, he says that others initially inspired him to begin planning the first Door County Triathlon.

“I can’t take total credit for the idea: I’m the one that brought the sponsors and charities together,” says Ryan. “The guy with the original idea was Mark Ernst.” Ernst owns In Competition, a Green Bay store that caters to endurance athletes.

“He told me to go and check out Murphy Park as a potential location for a Door County event,” says Ryan. After taking a trip north to Egg Harbor to scope out the area, Ryan reported back to Ernst: “It’s gorgeous, but there’s no parking.”

Ryan then approached Horseshoe Bay Farms President Rick Hearden, whose properties are located directly across the road from Frank Murphy Park. After hearing Ryan out, Hearden signed on as an event sponsor. “They let us use their fields for parking and even used their own people to handle parking logistics,” says Ryan.

Next on Ryan’s agenda was a conversation with George Pinney, Director of the Door County Parks Department, regarding use of the park for the event, which would necessarily limit access to the park for at least a few hours on race day.

Ryan already had plans to structure the Door County Triathlon as a non-profit entity to benefit the County Parks Department and the Door County YMCA. Pinney, Ryan reports, was understandably enthusiastic from the beginning, seeing the opportunity to build more grassroots support for the county parks. Together, they established the Friends of Murphy Park, dedicated to the long-term protection and enhancement of the park.

The first Door County Triathlon, Ryan reports, “essentially broke even last year, [owing to] $10,000 in start-up costs, such as barricades, public safety, permits, promotional and directional signage. This year, I’m hoping to raise several thousand for each charity. I hope to get to where we raise $10,000 each year for each organization.”

Ryan, who also is the event director for the Green Bay Marathon, is very enthusiastic about the growth potential of the Door County Triathlon. He says that “in only its second year, [the Door County Triathlon] is already going to be one of the biggest in the state. It’s still a pretty narrow interest sport; an event that had 200-300 people was considered big.”

This year, the capacity for the Door County Triathlon is set at 1,000 participants. Ryan has no doubt that he will reach that goal. “Three months away from the event,” he said, “we already have over 300 registrations, twice what we had last year at that date. Our success depends on strong word of mouth and the buzz on the event was phenomenal.”

“Capacity is based on the number of bikes that fit in the Murphy Park boat launch area,” says Ryan, which serves as the staging and transition area for the athletes. “That’s the one-day capacity. We have a long-term plan: if we do limit out this year, we have every intention of splitting the event into two days, holding each course on a different day, which would effectively double our capacity [to 2,000 participants].”

Encouraged by the Door County Chamber of Commerce & Visitors and Convention Bureau to create an event during the shoulder seasons in the peninsula, this year Ryan is also organizing the Door County Fall Fifty, a fifty-mile relay or individual endurance run, from Northport all the way down to Sturgeon Bay. That event is scheduled for October 21, 2006.

With both the short and Olympic distance courses, along with the option of performing either course as a team relay, Ryan stresses that anyone can participate in the Door County Triathlon, no matter what age. “Last year, a majority, about 70 percent of our participants, were between the ages of 20 and 50; the oldest was over 70 years of age.” The Door County Triathlon also includes a kids triathlon, in four different divisions for ages 4 through 14, on Saturday, July 22nd at the Sturgeon Bay YMCA.