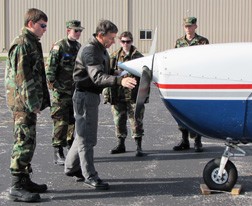 Five area teens experienced the thrill of aviation through orientation flights with the Civil Air Patrol (CAP) at Door County Cherryland Airport on Oct. 27. The cadets flew a combined seven hours in CAP’s Cessna 172 and Cessna 182.

Cadet Layla Scharpf, age 12, said, “I want to become a pilot and today, for the first time, I got to handle the controls of an airplane.”

The cadets began their day by helping pre-flight their aircraft. Working with their pilot, they taxied their aircraft to Cherryland Airport’s runway 28, gave it full throttle and took off, climbing to 3,500 feet. While aloft, it was the cadets who were handling the controls, during the non-critical stages of the flight.