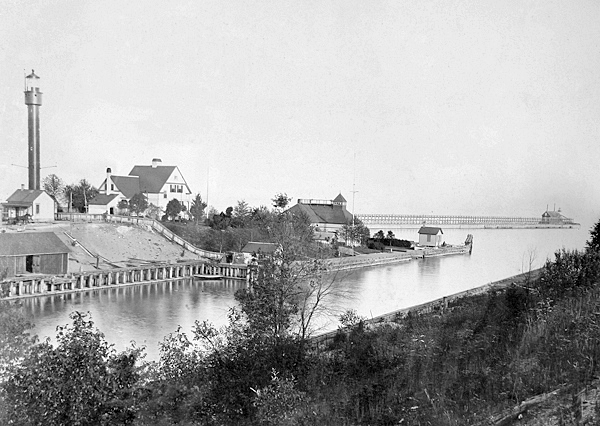 For anyone born after 1882, the ship canal has been a familiar part of Door County’s landscape. But it’s difficult to imagine how it – officially the Sturgeon Bay and Lake Michigan Ship Canal – could have been created nearly 14 decades ago in an era that was just beginning to put steam power to widespread practical use.

Robert Desh, the former executive director of the Door County Maritime Museum and a 36-year veteran of the U.S. Coast Guard, presented a detailed look at the canal’s history to a crowd of more than 100 at a recent dinner meeting of the Door County Historical Society at the Landmark Resort.

Joseph Harris, who was to become well-known in northeastern Wisconsin for many reasons, was born in England in 1813, immigrated to the U.S. at age 36 and arrived in Sturgeon Bay, a village of a few hundred people, in 1855. Harris was well educated, well to do, an innovator and a man of vision.

The Erie Canal, opened in 1825 and expanded in 1862, had linked the east coast to the Great Lakes, and cities on the lakes – Cleveland, Toledo, Milwaukee and Chicago – were growing rapidly and eager for the timber and stone available farther west.

Harris knew geologists believed that at one time there was a strait connecting Sturgeon Bay to Lake Michigan. Over eons, Lake Michigan, an aggressive and sometimes capricious mover, had transported billions of cubic feet of sand, dirt and stone to fill in the strait.

Seeing the advantages provided by the Erie Canal, Harris envisioned a similar canal linking Sturgeon Bay and Lake Michigan. He began to talk up the idea in 1860, with little success, but F. B. Gardner, who owned a sawmill in Little Sturgeon and was one of the first shipbuilders in the area, was an early convert. 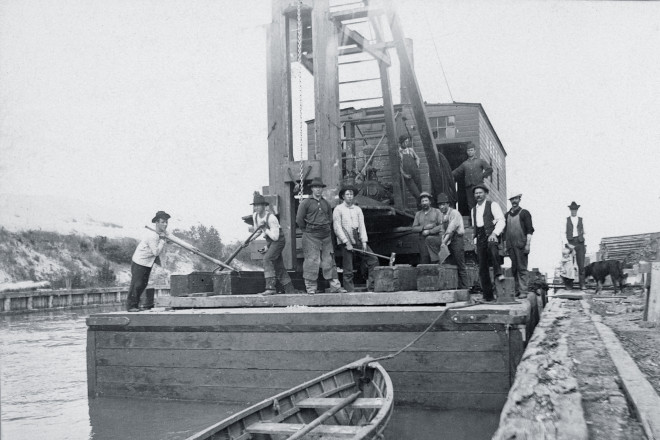 An early view of the Sturgeon Bay Ship Canal with wood pilings.

In 1864, Harris was elected to the state senate. Now he had a political platform to work with, and he created a corporation to support his vision, the Sturgeon Bay and Lake Michigan Canal and Harbor Company. Among its prominent members was William B. Ogden, president of the Chicago and Northwestern Railroad, Chicago’s first mayor and the largest lumberman in northern Wisconsin.

Harris went to Washington to petition congress for a land grant of 200,000 acres – part of the billions of acres of open land that congress could put into private hands for economic benefit to the public. It could be used as collateral to get investors, who would make money by selling the land as a return on their investments.

Harris got no support from representatives, who thought he was a dreamer, but Sen. Howard Doolittle agreed to sponsor a bill in the senate. It failed by two votes. Harris returned with letters of support from men on Wall Street and Washington movers and shakers, and he was granted the 200,000 acres. Ideally, they would have been near Sturgeon Bay, but that was not the case. The Wisconsin governor and  legislators were in charge of allotting the acreage. Some was on Washington Island; some in Marinette County.

Investors wanted an additional 200,000 acres and Harris accumulated data to support the request. F. P. Drew, keeper of the lighthouse on Green Island, logged the ship traffic for the next three years. More than 7,000 ships a year went by in the seven to eight months the bay was ice-free. Still, congress refused.

However, Harris did receive $40,000 for a survey of the rugged Lake Michigan coast with an eye to creating a harbor of refuge and selecting a site for the canal, which was estimated to cost $500,000. Lumber pirates had illegally cut much of the forest on the land grant around Marinette, and Harris received $40,000 “trespass funds” when they were brought to justice. The great fire of 1871 also burned a lot of timber, for which he was reimbursed another $40,000.

After trees on the canal site were cut, the first shovel of earth was dredged up on July 8, 1872. Work continued apace until the major depression of 1874 called a halt. Work resumed in 1877, and by June 28, 1878, only a thin strip of land remained between the two bodies of water. The second-senior dredge operator climbed down from his machine and opened a hole with a shovel, and the senior-most dredge operator got into a rowboat and rowed through the opening, becoming the first vessel to transit the canal.

On July 4, there was a huge celebration in Sturgeon Bay. The town and the peninsula were forever changed.

The three-masted schooner America, loaded with lumber bound for Chicago, sailed through in 1879. The government inspected the canal and declared it complete in 1881, and by the following year, it was in full use. Its length was 7,400 feet, its width 100 feet and its depth 22 feet. The cost: $291,500, less than 60 percent of the original estimate.

The Corps of Engineers constructed a harbor of refuge with piers that extend 1,000 feet into Lake Michigan, converging to create an entrance 335 feet wide, wave dampeners extending eastward 150 feet  and wooden structures to secure the sandy sides of the canal. By 1892, 4,000 ships a year were passing through. Because it was difficult to control sailing vessels in such a narrow passageway, they were pulled by tugs. Tug boat companies and shipbuilders were big financial beneficiaries of the canal, as were businesses such as granaries and lumber piers that sprang up along its banks.

One businessman who did not profit as much as he anticipated was Joseph Harris himself. Before the official survey that determined the site of the canal, he had paid for another survey of the area where he assumed the canal would be built, following the trail of an ancient Indian portage. He bought a great deal of land along this route and envisioned a new town to be called Harrisburg. Alas, that area was found to include a prominent limestone ridge, and the canal was built three-quarters of a mile south, where the land was sandy.

Lighthouses and lifesaving stations were built as a result of the canal. The first of these lighthouses was on Dunlap Reef, just north of the present Michigan Street Bridge. It was first marked in 1873, with buoys at each end of the shoal. A pair of range lights were built in 1881 and discontinued in 1924. The second keeper, from 1885 to 1890, was Joseph Harris, Jr. One of his employees was Hans Johnson, the father of Palmer Johnson, whose name became synonymous with shipbuilding in Sturgeon Bay. When the lighthouse was no longer useful, it was sold to Ruben Dickenson, who moved it ashore, minus its lantern room. It has served since then as a private residence at 411 S. 4th Ave.

Sherwood Point Lighthouse, built in 1883, was the last one constructed as a direct result of the ship canal and the last manned lighthouse in Door County before its automation in 1983.

The Sturgeon Bay Lifesaving Station, built in 1886, still exists in the original building at the end of the canal. Today it deals mostly with small craft. (Desh said there’s a Coast Guard saying that there are only two kinds of sailing ships – those that are aground and those that are going to go aground!)