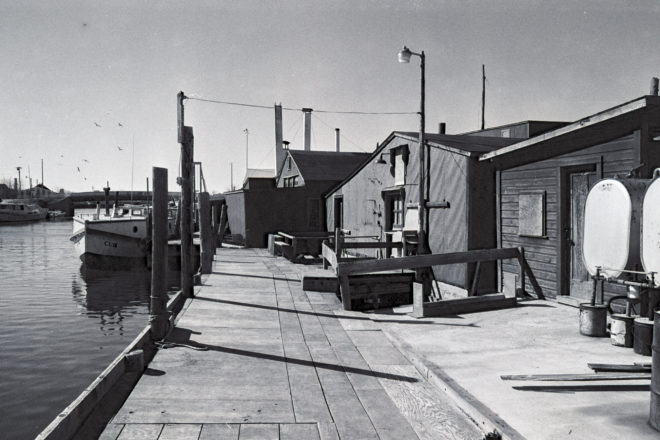 The Wisconsin Maritime Museum in Manitowoc recently opened a new exhibit featuring historic and current photographs and video of commercial fishing on the Great Lakes.

Jim Legault, a part-time Door County resident, began photographing commercial fishing operations in the 1970s, resulting in the book Reflections in a Tarnished Mirror: The Use and Abuse of the Great Lakes. It included his photos, text by Tom Kuchenberg and illustrations by Mary Ellen Sisulak.

In 2017 – 40 years after he first photographed the commercial fishing industry – Legault returned to photograph some of the survivors who were still in operation, such as Door County operators Charlie Henriksen in Sister Bay and Dennis Hickey in Baileys Harbor.

In addition to Legault’s photos and video featuring families that have been fishing for generations on Lakes Michigan and Superior, Titus Seilheimer, a fisheries outreach specialist with Wisconsin Sea Grant at UW-Manitowoc, provided informational material about today’s commercial fishing industry.

It is not just a historical exhibit of a dead industry or a romantic vision of a dying one. The industry is very much alive, though challenged by water-quality issues, invasive species and regulatory politics. These compound the daily challenges of hard work, weather, economics, maintaining gear and finding people who are willing to work in difficult conditions.

In spite of the challenges, the industry has survived, due in large part to the determination of a remarkable group of people and water-quality legislation enacted by state and federal governments.

The fisheries have been an important part of Great Lakes history and – with proper stewardship of the water quality, control of invasive species and a management philosophy based on science rather than politics – should last forever.

The exhibit, in one of the museum’s lower galleries, includes a photo of young Jim Legault and a display of two film cameras and a light meter that he used in the 1970s. (Today he shoots digital.) Legault has a connection to the fisheries that started in the late ’70s and a lifelong connection to the lakes that has been cultivated through growing up with boats on the bay of Green Bay, five seasons working aboard Great Lakes ore boats and being the owner of a schooner used in the charter trade from Fish Creek for many years, Schooner Friendly.

The exhibit will be on display at the Wisconsin Maritime Museum until at least January 2020.

Legault has another exhibit coming up called A Frozen Galaxy, featuring macro photographs of water in all forms. The exhibit, at Turtle Ridge Gallery in Ellison Bay, will be in place from July 27 until at least early fall.

He also has a portable exhibit of photographs of the Mexican sheartail hummingbird, an endangered endemic species of the Yucatán peninsula. The exhibit is moving among communities in the narrow band of the hummingbird’s habitat along the coast of the Yucatán to raise awareness of the seriousness of the species’ survival challenges.