The Carlsville Roadhouse, a landmark on the route to northern Door County and home to one of the best live music venues on the peninsula, burned to the ground in the early morning hours of Tuesday, June 14.

The blaze at the 106-year-old structure was reported by a passerby at 4:18 am. Firefighters arrived on the scene at 4:22 am, but the building was already engulfed in smoke, said Egg Harbor Fire Chief Steve Schopf. 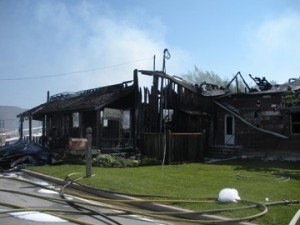 The Carlsville Roadhouse was destroyed by the blaze.

“We sent an interior crew in, but they came right back out,” Schopf said. “There was just too much heat.”

Schopf said the age of the building and its balloon-type construction made it difficult to fight the fire.

“There are no fire stops in the walls, and it’s all wood, so it spread pretty fast,” Schopf explained.

Firefighters and equipment from every Door County Fire Department (except Washington Island) assisted in the effort to put out the fire.

Nobody was in the building when the fire began, Schopf said, and it remained unclear where and how the fire started, though Schopf’s speculated it began in the kitchen area.

The Roadhouse, owned and operated by Doris Thorn Wilson and her son Glenn Thorn, was a cornerstone of Carlsville for more than a century at the intersection of Highway 42 and County I in the Township of Egg Harbor. With its towering false facade and weathered wooden siding, the building looked as though it had been plopped onto the side of the highway straight from the set of an old Hollywood western.

Carlsville was established as a tiny logging outpost that for decades featured little more than the bar, a general store, and the Carlsville Schoolhouse (now the Door Peninsula Winery).

“This is definitely going to change the landscape,” said Door County Sheriff Terry Vogel as he watched firefighters salvaging what little items survived the fire.

The devastating fire changed more than just the aesthetic landscape of the town. The Roadhouse’s huge dance hall and back bar drew revelers from all over the peninsula for rock and blues bands like American Standard and the Dave Steffen Band.

The Roadhouse (first building right of the intersection) in Carlsville’s quieter days. Photo courtesy of the Egg Harbor Historical Society.

Sturgeon Bay musician Fred Young considered it the best venue in the county and called it his favorite blues bar in the state.

“That dance floor was special because it was spring-loaded, so once you got people going it didn’t stop,” he said. “The rustic look and feel reminded me of an old delta juke joint and added to the flavor of the place. You could stand on that front porch and it wasn’t hard to imagine people tying up their horses looking for a glass of whiskey.

“There aren’t many places like that anymore,” he said.

Kim Tank worked as a bartender at the Roadhouse for two summers and recalled the legendary nights when American Standard rocked the walls. 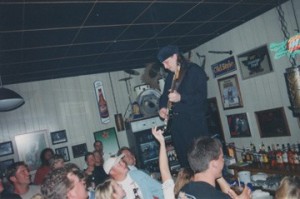 Chris Aaron was a part of many of the Roadhouse’s most memorable shows, including this rowdy night in 1999.

“Those shows were truly incredible,” she said. “The sound was just amazing with that big dance hall. There was no other place like it.”

Chris Aaron was hoping to get back there for a show this summer, but instead found himself reminiscing on shows gone by the day after the fire.

“I was really bummed out,” he said. “We had so much fun there, just a special place that will be missed.”

In the aftermath of the fire, all that Glenn and Doris could do was stare in shock at the charred remains of their beloved Roadhouse, which they’ve run for 25 years. 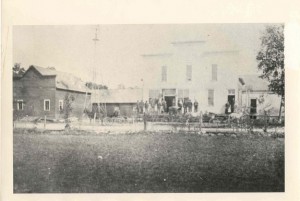 The Roadhouse building as it appeared in the early 20th century. Photo courtesy of the Egg Harbor Historical Society.

“What can you say? It’s gone,” Glenn said as smoke continued to rise from hotspots in the ashes.

Young called the owners “great people. I just hope they come through this okay and can do something new there.”

Those rabid crowds, legendary shows and the building that housed them are now only memories.