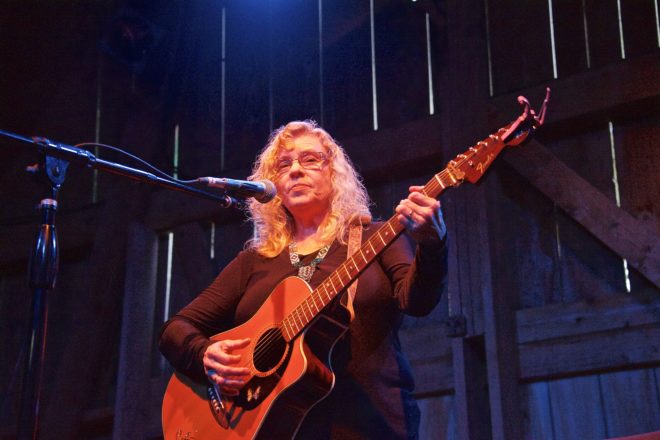 Arkansas native Carolyn Carter is beginning to feel like Wisconsin is her second home, at least for the months of July and August.

“I’ve been coming up here for about five years, playing different places around the state,” said the folk musician who returns to the Fishstock Concert Series on Aug. 5. “We really enjoy it and we’ve had the opportunity to come back every year. We’ve made a lot of new friends. We always get invited to sing someplace else. It’s been an adventure for me and my husband. We have a small camper we pull around. We enjoy being here, especially when it’s 104 in Arkansas right now.”

The Wisconsin connection began for Carter when some Wisconsin folks saw her perform at the Ozark Folk Center, a place dedicated to the preservation and perpetuation of traditional Ozark Mountain crafts and music.

“They were involved with a folk festival in Wisconsin and were interested in bringing us up. We just went from there,” she said. “I sing for my supper, so to speak. That’s why I try to play as many places as I can.”

Carter grew up in a musical family, with everyone but her mother playing music.

Carter wrote her first songs as a teenager and was “discovered” and offered a recording contract that she turned down, and instead raised three children.

But music was always there.

“It’s like a path. It all kind of fell into place,” she said.

As a contract singer for the Ozark Folk Center (where she was named 2017 Female Performer of the Year), Carter said her mission is to preserve the music of the Ozarks as well as the stories of the people, many of which she collected when she ran the Meals on Wheels program in her county, where she said she met “wonderful people with wonderful stories.”

“Everybody has stories,” she said. “I love to hear stories. My daddy was a storyteller. Some sad. Some happy. Beautiful stories. I’m from the backwoods of Arkansas, and I write the stories and struggles of the people of the Ozarks. One of my favorite things is to get out the untold stories about forgotten people and unfortunate folk. Gospel is part of the Ozark heritage, so there’s a mixture of everything, all kinds of stories from my family and a lot of people I’ve met in the hills and the hollers.”

Last year she and husband Jeff sold the three acres they had been living on to have an adventure on the road in their camper. Tickets are $20. For more information and the Fishstock series schedule, visit fishstockmusic.com.