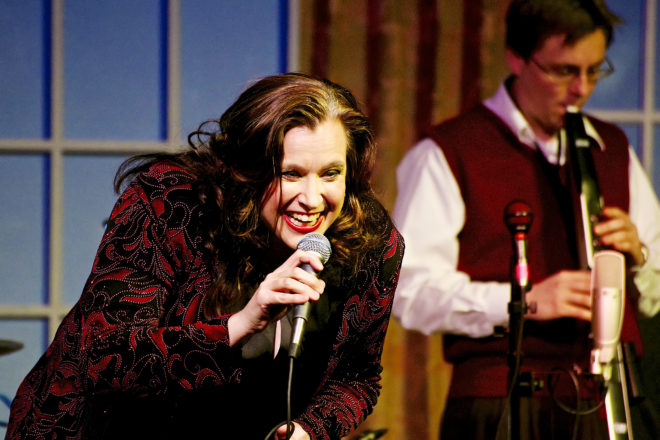 Lisa Rock and her six-piece band will return to Third Avenue Playhouse on April 30 for their fourth performance in the county since 2012. (Above) Rock performs during “A Carpenters Christmas” in 2012 at TAP. Photo by Len Villano.

Tribute musical groups are one of my guilty pleasures. I admit to attending Simon and Garfunkel, Everly Brothers, and Peter, Paul and Mary tribute concerts, and not too long ago, a Hair revival. (However, I do draw the line at Elvis impersonators!)

I find that I have plenty of company among those of a certain age on the Door Peninsula in my fondness for revisiting my musical past, recapturing those days of youth and abandon. When Lisa Rock and her six-piece band come to the Third Avenue Playhouse (TAP) in Sturgeon Bay for their April 30 Close to You: The Music of the Carpenters concert, it will be their fourth performance in Sturgeon Bay since 2012.

The Chicago-based group, which for seven years has been dedicated to recreating the Carpenters experience, is now on a coast-to-coast tour that includes a stop in Door County. Rock, with her four-octave vocal range, is very much at home with the singing style of Karen Carpenter. Karen, along with her brother Richard, formed the 1970s duo the Carpenters, who in addition to their hit song “Close to You,” also gained fame for “We’ve Only Just Begun,” “Rainy Days and Mondays,” and “A Kind of Hush.”

The Carpenters’ repertoire appeals to Rock, she said, because it is “pure music, timeless and still relevant.” She added, “I never tire of singing it” and “discover nuances every time.”

She spoke to this reporter on the phone from Atlanta where she and her band had been playing in Florida and the Carolinas to standing ovations from audiences generally in their 50s, 60s, and 70s, “but we have them from five or six to 90 years old,” she said. “It’s amazing to me! They say, ‘We like great music!’”

She prides herself on being able to communicate not only with her band (“There’s a 20-year difference between my age and that of the younger band member!” she said) but also the 60-plus crowd that she finds “nothing but interested and engaged,” responding to the music with a youthful enthusiasm that is “moving and overwhelming.”

Rock says that her band is characterized by authenticity and commitment, and “is so much fun both on and off stage.”

Included in the ensemble are Amy Malouf, a Chicago actress, musician, and songwriter who provides backup vocals and percussion; Justin Boller, who performs with music groups in Chicago and beyond, playing bass and guitar; Eric Engelson, a self-taught drummer who often is found in pit orchestras for Chicago theater productions; Dave Orlicz, who plays woodwinds and keyboard throughout Chicago, primarily with jazz and theater groups; Micky York, who offers backup vocals, keyboard, harp and drum, in addition to being an award-winning musical director, composer, and designer; and Ken McMullen, piano, a professional musician in the Chicago area who is seen in theater and cabaret shows.

Rock looks forward to her return to TAP, the intimacy of this venue that allows musicians to perform up close before “people who recognize great music,” a “warm audience that gets it.”

Even though Close to You has been here before, she noted, they will be bringing something new, including a duet that Karen Carpenter once sang with Ella Fitzgerald. “And we have some great road stories that we will tell!”

Lisa Rock and her six-piece band will perform Close to You: The Music of the Carpenters at the Third Avenue Playhouse at 7:30 pm on April 30. For more information and tickets, call 920.743.1760 or visit thirdavenueplayhouse.com.