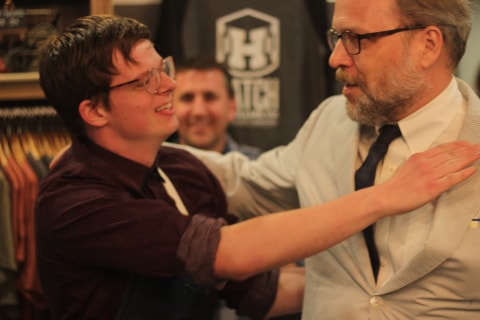 Simonson gives Castelez a congratulatory embrace after his cocktail was named the winner. Photo by Collin Massad.

For the second year in a row, the Door Kinetic Arts Festival (DKAF) kicked off its festivities with a cocktail competition that was hosted by Hatch Distillery and featured local spirits. The challenge issued to the six competing bartenders was this: create a cocktail that is evocative of Door County. The contestants all used one of the Hatch-made spirits and explained the inspiration behind the drink while they created it for event attendees and the judges.

The New York Times cocktail and drink writer Robert Simonson served as the competition’s host and judge and noted, “The quality of cocktails this year has really skyrocketed. All six were very enjoyable to drink, with lots of flavor. It was hard to choose a winner.”

Hard as it was, a winner was selected: called The Land We Share, the drink was crafted by Ryan Castelez of Discourse Coffee and HEIST. It used all local ingredients: foraged herbs, cucumber water and three levels of lemon flavor – a syrup made from two-year-old preserved lemons, Hatch’s limoncello and lemon juice. “It was a smooth and silky cocktail, like a liquid lemon-meringue pie,” Simonson said.

“As I was putting together the competitors for this year,” Simonson said, “Chris Roedel, the owner of Hatch, had suggested we invite Ryan Castelez, whom he described as a barista who thinks like a mixologist. And there is a real connection between baristas and bartenders – the detail and ritual – so that made sense to me.”

Castelez described his thought process behind the cocktail this way: “It was designed to tell the story of the undercurrent of incredibly brilliant, earnest and hard-working farmers, foragers and producers who are building a new Door County – one that seeks to grow and create things that compete on the world stage, not just in the thumbnail of Wisconsin.”

As the competition winner, Castelez will work with Simonson to create a batchable version of the cocktail to serve at the Thursday-evening events during the Door Kinetic Arts Festival at Björklunden in Baileys Harbor. The cocktail rounds out a week of featured daily cocktails that are paired thematically to the events happening each evening of the festival.