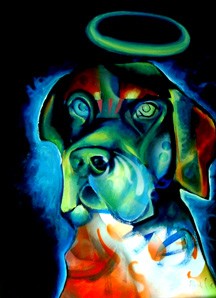 Five years ago, writer Gary Jones met with artist Ernest Beutel to discuss his artwork (“The Layers of an Artist, Ernest Beutel” Volume 15 Issue 10): “Whether the subject is a playful rendering of an animal, a grotesque characterization of a human face, or a primal suggestion of rugged construction machinery, the artist’s use of vivid colors and bold forms appears in work that may emerge from the darkness of a nightmare or might ironically float on the surface of a nursery rhyme.”

Sally Slattery caught up with Beutel, now an art teacher at Southern Door Middle School, to see how his artwork, and life, has changed since then.

Sally Slattery (SS): We last spoke with you in 2009, then you were creating what you called “abstract-representationalism.’ Are you still creating similar work? How has your work changed in those five years?

Ernest Beutel (EB): “I may be here now, but I am not all together there,” has been in every statement on the back of my artwork for many years. I would have to say perhaps it could be adjusted just a bit to “I may have been there, but I am here now.” Life is a journey, and I try to embrace every twist and topsy-turvy turn the path takes.

“Abstract-representationalism” is the term I used in 2009 to describe my work. I would say I still define my artwork as both abstract and representational. I work in layers and have developed many different series of paintings over the years. However, I have come a long way since 2009, creating many series since the “E-i-E-i-Oh” series (where Old MacDonald could have any creature on his farm). I developed a new series of E-i-E-i-Oh creations since then, combining the unusual images from 2004-2005 (shown at my first solo show at the Flying Pig in Algoma) with the lighter-hearted E-i-E-i-Oh animals in 2006-2007. The result can be seen in “Sinner or Saint,” a portrait of a mischievous dog. As I recall in 2009 I was developing, or had already taken the E-i-E-i-Oh series into the realm of 3-D. I created a violin for the Door County String Academy with a jackalope on one side and an elephant on the other, both in the tradition of using stickers as stencils to create negative space and Day-glow spray paint, as I did in my prior E-i-E-i-Oh series. I had also mentioned creating a painting of a shark reminiscent of the pen and ink shark drawing from the September 2008 solo exhibit at the Fairfield Gallery. Except, this new painted shark was built up as a relief sculpture. 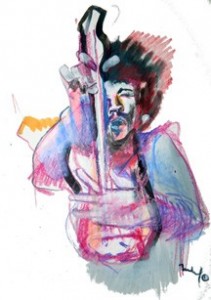 Today, I am still doing crayon renderings of rock stars that belong to the “27 club.” Some of the Jimi Hendrix drawings were displayed at the Fairfield. I think my images, however, have evolved since 2008-2009. The title of the painting to be displayed at the Meadows Art Gallery in Sister Bay is “Jimi Hendrix Bones.” The mark Hendrix made in music history is a substantial footprint. I wanted to represent Hendrix in all his glory, playing the guitar vertically. The neck of the guitar becomes the spinal cord, while the base of the guitar becomes the sacrum. His face is almost ghastly (in a grand way) as he plays not the guitar, but his soul. Hendrix is constructed from elements of abstraction, but also pure emotion and artistic energy.

The emotional content of my work has more recently travelled down an unlikely, yet welcoming, path. From 2011-2013, with the quilting skills of my partner Samantha Vanderhoof, I collaboratively created quilted works out of recycled paintings. The quilted painting titled “Gorilla” was previously a 2006-2007 painting of a gorilla lost in thought, titled “Conflicting Thoughts.” Even though I was happy with the painting prior to tearing it up into squares and triangles, I knew it had more potential. There is a degree of risk I am willing to take with my work. If I did not take risks within this artistic journey I would not be where I am at today. It is amazing how many avenues this has opened for my art. The vibrant contrasting colors in the gorilla were an added bonus to the new quilted piece. Now the gorilla, once merely a pleasing painting, takes on a new dimension. The quilted painting has a smaller piece inset within it that you really have to see in person. A photograph does not do it justice. I did not hesitate to tear up certain paintings from the past, while at other times I tore up others with the thought in mind that it would only result in something far more innovative – I have not looked back since.

In the midst of my third year at Southern Door Middle School in Brussels I reflect back to when I was completing my Licensure at Silver Lake College in Manitowoc. I remember thinking, “I don’t know where this will take me?” I still don’t know where it will take me, but I have to say I have been enjoying the ride. I have received knowledge from a long line of great instructors and truly believe it is my mission to pay it forward by passing on the torch of knowledge to others. My hope is that the students will continue to pass the torch for many years to come.

SS: How does teaching at Southern Door Middle School influence your art? 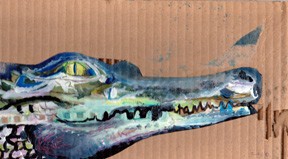 EB: My artwork has certainly been influenced by my experience teaching at Southern Door Middle School. In turn, the students have found new and exciting mediums to express themselves through the visual arts. The quilted paintings I have been working on have found their way into the classroom as examples of contrast and the exploration of mixed media. Like the quilts, the students have also discovered the sculptural advantages to using recycled materials.

In middle school, cardboard seems to be worth its weight in gold. The students have used cardboard many times in both printmaking (collagraph) and sculpture. As they tore the layers back to expose the corrugated textures I thought to myself, “why not use this medium in my own work?” So I created a series of paintings on cardboard. Having spent some time in my life as a picture framer I knew full well the non-archival qualities the acidic cardboard would have on my artwork. Again, life is a journey and we must embrace every twist and topsy-turvy turn the path takes.

View more of Beutel’s work at ernestart.com. He is represented by Mill Road Gallery in Sister Bay and currently exhibiting work at The Meadows in Scandia Village, Sister Bay. An opening reception will take place Jan. 11 from 5 – 7 pm.