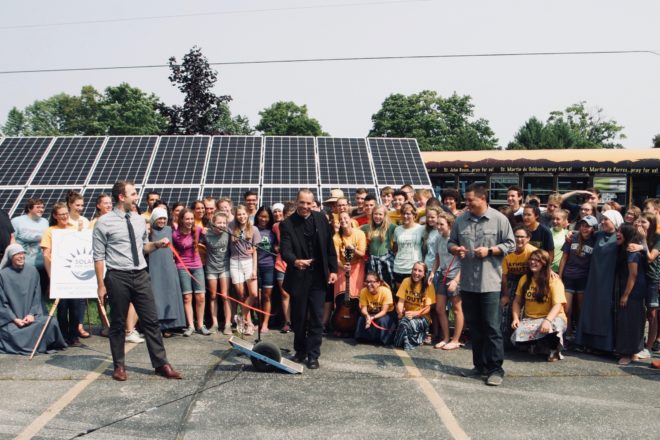 A blue and sunny sky was welcome for the Aug. 13 ribbon cutting for the new 20kw solar system that will supply half of the power used during the 32 annual retreats at the Catholic Youth Expeditions (CYE) campus on Kangaroo Lake.

“You are on the cutting edge. The first class,” Heather Allen of RENEW Wisconsin said at the event before the 47 high school students taking part in the retreat, the 17 college student staff members from all over the country, retreat staff and friends of the retreat.

Allen was referring to Solar for Good, a program that isn’t even a year old, yet has already generated $2.2 million in solar investment among more than 30 nonprofits that include houses of worship, soup kitchens and arts organizations.

RENEW Wisconsin administers the Solar for Good program, which was started last year with a donation from philanthropists Cal and Laurie Couillard of Deerfield, Wis. After converting his own business to solar, Couillard wanted to share the message that going green isn’t just good for the environment, but it saves money.

Father Quinn Mann, founder and director of CYE, informed the audience that he intentionally parked the retreat’s two diesel buses next to the new solar array, pointing out that those buses are driven 9,200 miles annually.

“Wouldn’t that be cool if that was all renewable from the sun?” he said.

So his next big project is to replace the fossil fuel-guzzling buses with a new Blue Bird electric bus, which just started hitting roads this year.

Fr. Quinn is personally committed to green mobility. He brought his Onewheel electric skateboard to the ribbon cutting, which he demonstrated after. He also has an electric bike.

“And I’m working on an electric car, too,” he told the audience.

He explained that the retreat board was able to get behind the idea of solar power for the retreat with the combined power of two grants – Solar for Good and Focus on Energy’s Renewable Energy Competitive Incentive Program (RECIP), which awarded 65 applicants with a total of almost $2.2 million in renewable energy systems in 2017.

“This should offset about 50 percent of the entire electricity consumed for the year,” he said.

The solar array is American made, Michalski pointed out, with the Solar World modules from Hillsboro, Ore., hometown of one of the 17 college student summer staff.

Michalski said he was glad to be able to work with Fr. Quinn and install a system for “a really neat organization.”

RENEW Wisconsin’s next Solar for Good grant cycle opens for applications on Oct. 1. Applications must be received by Nov. 13 at 5 pm. Grantees will be announced on or before Nov. 26. The grants cover up to 20 percent of the cost of a solar array, with a maximum grant amount based on the size of the array. More information is available at renewwisconsin.org.