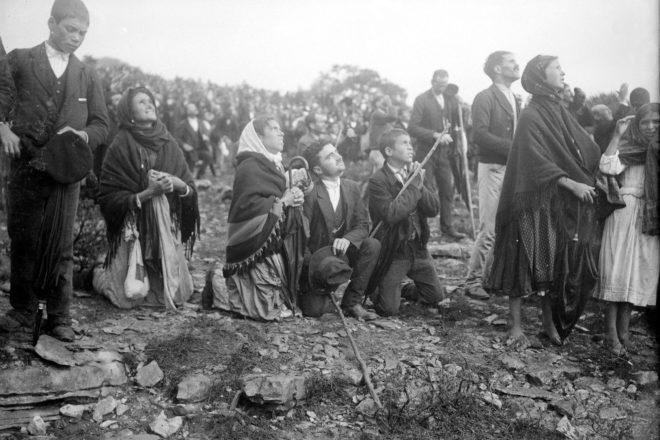 This 1917 photo shows the people looking at the sun during the Fátima apparitions attributed to the Virgin Mary. Public domain image.

Visions of the Virgin Mary go back to the beginning of Christianity. Catholics call these visions “private revelations,” as opposed to public revelations, which catholicculture.org describes as “the revelation given to the apostles, which closed with the death of the last apostle in such a way that nothing can be added to it.”

Some say one of these “private revelations” that is about to celebrate its 100th anniversary on Oct. 13 was nothing more than a case of mass pareidolia, or mass hysteria, or sun-induced eye fatigue, or a combination of all three.

The Catholic church, however, has a different view. In a long article titled, “Must Catholics Believe in Fátima?,” Rev. Eamon R. Carroll, Professor of Theology at Loyola University of Chicago, writes on catholicculture.org: “So far as the particular circumstances that gave rise to the Fátima message are concerned the Church has warmly recommended acceptance of the apparitions, but only as a matter of human faith, so that a Catholic is not obliged to accept the initial accounts, whether of 1917, or the appearances of the angel in 1916 or subsequent revelations communicated to Lucy since 1917.”

The Lucy he refers to is Lúcia de Jesus Rosa dos Santos, “the little shepherdess of Fátima,” one of three children – including her cousins Jacinta and Francisco Marto – who claimed to witness Marian apparitions in Fátima in 1917. She became a Carmelite nun, so was also known as Sister Maria Lúcia of Jesus and the Immaculate Heart. She outlived her cousins, dying at the age of 97 in 2005.

In 1917, Lucy was 10 and her cousins were 9 and 7, living about two miles west of Fátima, Portugal. Their families raised sheep and the children worked as shepherds. On May 13, 1917, the children said a lady in white appeared to them and spoke to Lucia alone, telling the girl that she would reveal herself in six months, and that the children were to return to the spot on the 13th of each month.

The kids returned with about 50 people on June 13 and saw the woman again. She returned again on July 13 with a special revelation for the children, but others in attendance saw and heard nothing. The children were detained by police on Aug. 13, so didn’t make it to the site.

As many as 70,000 people gathered on Oct. 13. The woman appeared to the children and identified herself as “the Lady of the Rosary.”

The lady told the children the war would soon end (it took more than another year). After making several other revelations that the children did not immediately share, Lucia proclaimed “The sun” and suddenly some people saw “the sun dance” and other anomalies that led to the event being referred to as “the miracle of the sun.” However, the “miracle” was not noted anywhere else in the world.

The church investigated and declared the events worthy of a miracle.

Lucia’s cousins became victims of the worldwide influenza epidemic of the time, with Francisco dying in 1919 and Jacinta in 1920. In 1927, Lucia said the lady in white had predicted their early deaths.

On Friday, Oct. 13, Father Ubald Rugirangoga, a Catholic priest from Rwanda, will be the principal celebrant for a Mass and Eucharistic Healing Prayer Service at the National Shrine of Our Lady of Good Help in Champion, Wis., which is northeastern Wisconsin’s home of a religious miracle. 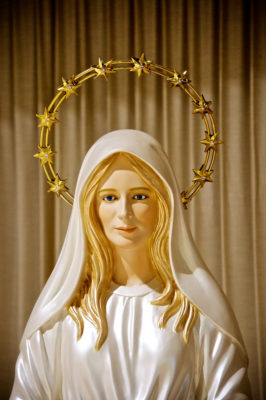 The National Shrine of Our Lady of Good Help in Champion, Wis. will host a special mass Oct. 13. Photo by Len Villano.

On Oct. 9, 1859, the Queen of Heaven is said to have appeared to Adele Brise in Champion, and said to her, “Gather the children in this wild country and teach them what they should know for salvation. Teach them their catechism, how to sign themselves with the Sign of the Cross and how to approach the sacraments; that is what I wish you to do. Go and fear nothing. I will help you.”

In 2010, Green Bay Bishop David Ricken granted formal Church approval to the Marian apparition at the Shrine of Our Lady of Good Help. In 2016, it was designated as a National Shrine by the U.S. Catholic Conference of Bishops, which maintains “it is the first and only confirmed appearance of the Blessed Virgin Mary in the United States.”

Fr. Ubald’s visit falls on the 100th anniversary of the “Miracle of the Sun.” The service begins at 1 pm and will be held at the outdoor altar at the Shrine, with limited, first-come, first-served seating in a tented area.