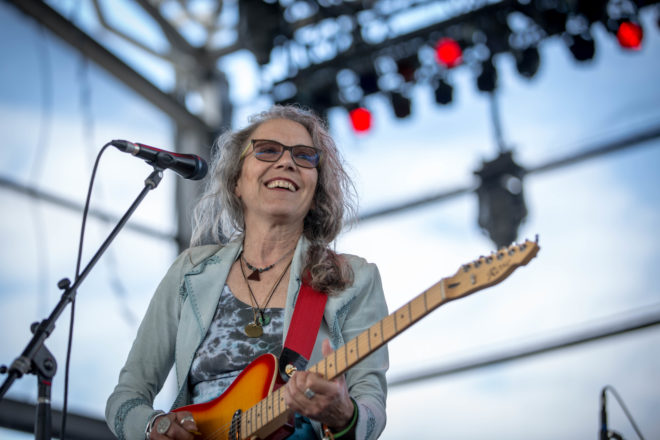 Cathy Grier at Summerfest in 2019. Photo by Ty Helbach.

When blues artist Cathy Grier moved to Wisconsin three years ago, she hit the ground running. Though she arrived with a 40-year music career behind her – busking in New York City subways, writing hit songs in Paris and starting a record company (to name just a few experiences) – she wasn’t ready to slow down.

“I put myself to the test the minute I arrived in Wisconsin,” Grier said.

She soon became a well-known name in Door County’s music scene as a participant in Steel Bridge Songfest, as host of WRiTERS NiGHT at Holiday Music Motel and as a regular performer at local restaurants, bars and festivals.

After 65 performances around the county this summer alone, Grier is thrilled to be headlining her first show at the Door Community Auditorium with her band, The Troublemakers, on Sept. 14, 7 pm. Tony Menzer will be on bass, Jamey Clark on drums, Jim Ohlschmidt on guitar, Larry Byrne on keyboard and Pauli Ryan on percussion.

Reflecting on her move from New York to Wisconsin, Grier said she had to work extra hard to establish her music in a community that didn’t know her yet. The scene here – especially the Steel Bridge Songfest – already demonstrated high levels of collaboration and songwriting.

“[Sturgeon Bay] is successfully up and coming and filled with incredibly talented artists and creatives,” Grier said.

Right before coming to Sturgeon Bay, she drove around the country for six months and noted that music is pretty much the same everywhere. Not a lot has changed in that respect during the last three years. It’s the listening experience that has changed.

Older audiences are remembering what it’s like to go see live concerts, and they make up the bulk of Grier’s attendees, she said. Audience members range in age from 20-somethings to those in their 70s and 80s.

“Live music is something that people have always loved, but I find it exceptionally vibrant here in Wisconsin,” Grier said.

Though she’s experimented with numerous genres, the blues have been a continuing thread since she was 17, experiencing them while living on her own as a teen.

Grier was also a social activist inspired by the civil-rights movement and musicians such as Richie Havens and Joni Mitchell. Though she couldn’t get work as a blues artist right away, these influences informed her writing and helped her relate to the world, she said.

Even now, Grier’s version of blues isn’t the traditional eight-bar that might be expected. She’s also been pegged as a “folk’ed-up blues” artist because she sometimes adds folk twists and even a little jazz.

“I’ve needed to survive as a musician,” Grier said. “I’ve been a professional musician all my life. I haven’t punched a clock since I was 17, working in a clothing store and as a drive-up teller at a bank.”

Even after years of playing, Grier is still coming into the genre. Just two years ago, she started teaching herself how to solo on the guitar during live performances, though she’s always considered herself to be an accomplished rhythm guitarist.

“It’s something that I’m working on existentially,” Grier said. “It’s a man’s world, and there’s not many female musicians, and that’s why I think female musicians tend to stay away from the ‘shredding’ that guys do on the electric guitar.”

She’s never been inspired by that kind of playing but is learning just enough to master it and pull back to create her own voice. Playing with the band has given her more freedom to experiment with soloing.

“It’s developing, and I’m really excited about it,” Grier said. “All these things I couldn’t really do before because I was thinking in a different perspective. Finally, maybe it’s with age that I’ve said, ‘Hell, yeah, I can solo.’”

Headlining at the Door Community Auditorium (DCA) – a goal since moving to Wisconsin – is an opportunity for Grier to showcase herself as an artist outside of the restaurant scene. Instead of worrying whether bartenders can hear orders or a table will leave if she takes a short break, she’ll be able to focus on playing with her group of all-star musicians and making magical moments.

And it won’t end there. Grier and The Troublemakers are recording an album the week after the show. She hopes to bring as much creativity and as many guest artists as she can to the record, much like her DCA show. The album is projected to come out in November.

Grier’s next steps will likely take her away from Door County’s bar and restaurant scene, where she feels she’s run the course. She plans to return to playing at performance-based venues and is excited to get her record out to share who she is.

Join Cathy Grier and The Troublemakers at the Door Community Auditorium on Sept. 14, 7 pm. Learn more and buy tickets at dcauditorium.org.