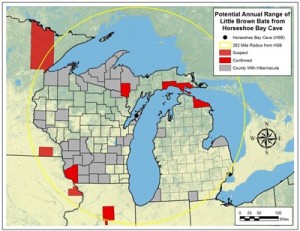 The cavers wanted sediment from the first 370 feet of the 3,103-foot cave removed to allow greater public access, but first the committee and then the county board approved the plan as written. The cavers were told that the plan is a living document that can be changed in the future.

In fact, the plan states:  “While the foundation and principles will remain constant, this Plan must be viewed as a living, breathing document that will evolve and change over time.”

However, Bill Schuster, head of the county Soil and Water Conservation Department, said at the county board meeting that any modifications to the cave must be based on science, and it is incumbent upon those who propose changes to come up with the science to justify modifications.

The county owns the entrance to the cave, and Horseshoe Bay Golf Club owns the rest. The next step in the process is for the county and the golf club to work out an access agreement, which is one of the key reasons the cavers’ idea could not even be considered now.

The management plant takes into consideration the discovery in Wisconsin earlier this year of the deadly fungus, white-nose syndrome (WNS). The fungus affects bats’ ability to hibernate.

“This plan is one of the first, if not the first, of its kind developed in the era of WNS, which factors in not only human use of a known bat hibernaculum, but also unique laws specific to Wisconsin that regulate caving activities as they relate to WNS,” the plan states.

The plan urges caution in opening the cave to activity that could endanger the subterranean population. “Much is unknown about invertebrate species at HSB Cave and a precautionary approach should be taken in managing the cave for these resources until more is known about the habitat requirements of these animals,” the report states.

In addition to a cave access agreement between the county and Horseshoe Bay Golf Club, Randy Rose, one of 33 owners of the golf club, said the club will contribute up to $4,000 to have a scientific survey of the cave conducted so more is known about it, especially in relation to surface activities of the golf club.

The plan states that access to the cave is a privilege, not a right. Written requests must be made for access, and there are varying types of access.

You can read the Horseshoe Bay Cave management plan on the Door County website (door.wi.us/Agendas-Minutes). Look under the most recent agenda.