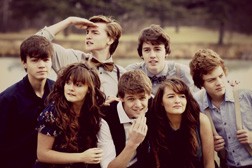 The national touring group The Hunt Family will headline the concert. The Hunts are an indie-folk band from the southlands of Chesapeake, Virginia. These seven brothers and sisters have a passion for creating compelling music and collaborate with one another’s gifts of writing, composing and musicianship.

The Hunts have toured the country and worldwide for over 10 years. In November of 2012, the Hunts released their newest album We Were Young, which was produced by 13-time Grammy nominee Mark Carman.

Opening guest artist for the night is Dorothy Scott, who will begin playing at 7 pm with the MDCMC Children’s Choir. Known for her daring and uncompromised performances and amazing guitar playing, Scott has toured the U.S., Sweden, Ireland and Canada. She has shared the stage with artists like Carole King, Joan Armatrading, Joan Osborne, Jeff Buckley, and Sinéad O’Connor.

This is a free show, open to the public; tickets are not required. Doors open at 6 pm. For more information call 920.493.5979. Door Community Auditorium is located at 3926 Highway 42 in Fish Creek.