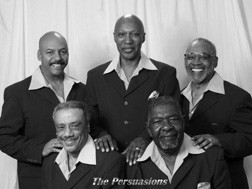 On Oct. 5 at 7 pm, Ministry Door County Medical Center will present “Celebrate Community” at the Door Community Auditorium in Fish Creek. This live concert will feature The Persuasions, an acappella group, with an opening act by Dorothy Scott. A sixty-piece children’s choir from Sevastopol High School will also be in attendance.

From their humble beginning of singing on the streets of Brooklyn, New York in 1962, The Persuasions earthy gospel infused voices have soared through the echo chambers of New York City Subways to the dizzying heights of the Carnegie Hall stage in Manhattan. They have recorded with the likes of Paul Simon, Stevie Wonder, Joni Mitchell to rock’s legendary Jerry Garcia and The Grateful Dead. The list goes on to include Ray Charles, Aretha Franklin and along the way earned the respect of countless fellow artists such as The Temptations, the late Curtis Mayfield, Four Tops and the list goes on and on.

Now, in what some may call the “twilight” of their illustrious career,  The Persuasions are still performing across the U.S. and traveling abroad, most recently in December of 2013 to appreciative fans at Japan’s Cotton Club in Tokyo.

Opening the night for The Persuasions will be national touring artist Dorothy Scott. Scott has an exquisite vocal style, amazing guitar playing and a gift for discovering the heart of a song. Her live performance is passionate and real, fierce and funny, outspoken and vulnerable. Also, Sevastopol High School’s 60-piece choir will join Scott and The Persuasions on a few selected songs.