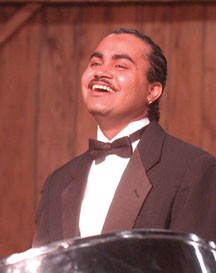 Teague originally joined the faculty as a special performer and steelpan Artist-in-Residence for the Percussion & Steel Band Session. When Steel Band Director Al O’Connor retired in 2012, Birch Creek was honored to have Teague assume his position.

“Birch Creek is a magical place in so many ways,” said Teague. “It is truly a unique atmosphere, especially since not too many camps allow one to learn steelpan, multiple percussion instruments, and put on so many high level concerts in just the space of two weeks.”

Teague is currently the Head of Steelpan studies and Associate Professor of Music at Northern Illinois University (NIU), Dekalb, Illinois. Along with Clifford Alexis, he is co-director of the NIU Steelband. He has distinguished himself as the recipient of many awards in his homeland of Trinidad and Tobago, and has performed with many diverse ensembles, including Taiwan National Symphony, Czech National Symphony, Saint Louis Symphony, Panama National Symphony, Chicago Sinfonietta, Vermeer String Quartet, University of Wisconsin-Madison Marching Band, and many more.