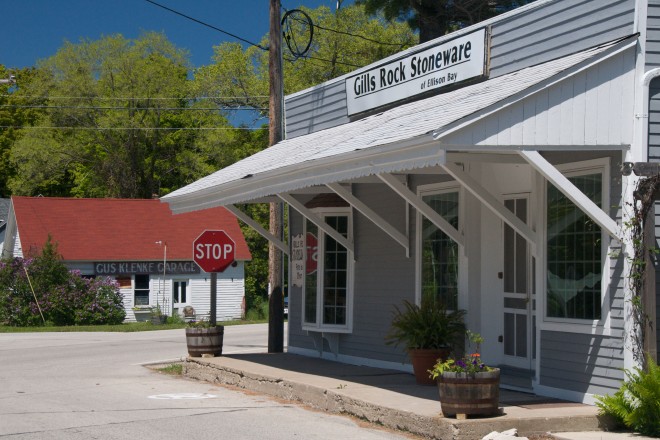 Next to the table where I interview Thor and Judy Thoreson in the back studio of Gills Rock Stoneware, 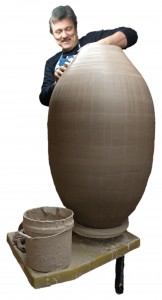 there sits a tall ceramic pot, unfinished but already decorated with water birds and plants of a myriad of clear, bold colors.

“It’s 46 inches tall,” Thor explains. “I’ve been exploring scale lately. These big pots have really gotten my juices flowing again.” Asked why he stopped at 46 inches, Thor smiles wryly. “Because that’s how big my kiln is.”

But even though it imposes limits on the height of their pots, the size of the Gills Rock Stoneware kiln can’t deter the Thoresons from the self-challenge and innovation that form the core of their Ellison Bay studio and gallery.

This year, the Thoresons, who met in a pottery class at Luther College in Iowa, celebrate the 30th anniversary of Gills Rock Stoneware. The Thoresons originally came to Door County from Crystal Lake, Illinois, where Judy was teaching language arts and Thor was just beginning his career as a potter.

“For many of the early years, a good portion of what I made was sold at the Jack Anderson Gallery,” Thor says. When Anderson moved his gallery from Gills Rock to Sister Bay, he vacated a gallery building on the water in Gills Rock and suggested that the Thoresons open their own showing space there.

“We knew there was a market here,” says Thor. “And once we saw Door County, like so many people do, 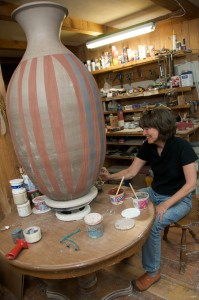 we fell in love with the place.” So the Thoresons opened their own Door County gallery on June 10, 1979. Thor remembers, “There was a workshop in the back of the building. I’d sit at my wheel and think, ‘I must have the best view from a potter’s wheel of anyplace in the country.’”

Ten years later, the Thoresons bought their current studio and gallery, on the north edge of downtown Ellison Bay. There, they run their business year round, selling pots thrown by Thor and decorated by Judy, along with the assistance of a few other full and part-time employees. Judy also runs most business aspects of Gills Rock Stoneware and can often be found at the gallery’s front desk.

Asked to characterize the type of pottery he makes, Thor points to his post-college studies with Marguerite Wildenhain. Wildenhain was a French-born potter who was trained at Germany’s prestigious Bauhaus, a craft school committed to training artisans in a conscious reaction against the industrial revolution. Studying with Wildenhain instilled in Thor a commitment to pottery’s function as well as its art.

“Marguerite always said, ‘You can’t write poetry until you learn the language.’ You had to learn the technique. Once you can throw, then there’s a constant re-evaluation of what you’re doing, how to make it better.

“It was excruciating, learning this craft,” Thor continues. “I worked my butt off. Now it’s a joy to me. Throwing pots, there’s nothing I’d rather do.” 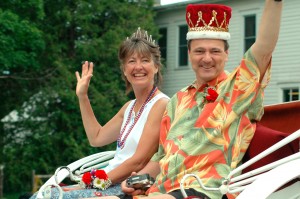 Thor’s intensive training taught him to balance the integrity of the form of his pots with their aesthetic design. “At the Bauhaus,” he explains, “pottery was taught by both a traditional country potter and a sculptor [who had been] taught by Rodin. Everything should be perfectly functional, each piece made with integrity.” This Bauhaus training was passed down through Wildenhain to Thor, resulting in pots with strong shapes and, as Thor puts it, “a certain tension to the line, the contour of the piece.” Also characteristic of Gills Rock Stoneware pottery are the under-glaze decorations, often images of nature or Door County life, that adorn most of the gallery’s pots.

In order to produce this type of pottery, the Thoresons fire their pieces twice:  first in a bisque firing (which reaches 1,900 degrees Fahrenheit) and second in an even hotter firing (2,300 degrees). Before the first firing, Judy and other Gills Rock Stoneware employees decorate the pots with thick creams called slips, which function like paints. Before the second, Thor glazes them.

“Glazing is really important, and people don’t think about that,” Judy says. “People look at the pots and look at decoration and think, ‘I really like it.’ But it’s the whole process. [Thor] spends days glazing a kilnful of pots.” 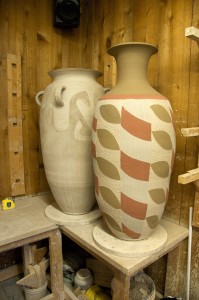 The Thoresons’ pots are also reflections of the environment in which they’re produced. From 1992 until 2004, they ran not only their Door County gallery, but also a second studio and gallery in Florida. Eventually, the logistics of running two complete pottery operations in different parts of the country became too difficult, but the Thoresons look back fondly on their time in Florida, and point out that the differences between the pots produced in each location provide interesting reflections on their artistic process.

“It was basically the same stuff, but we rely on the landscape for inspiration, and when you’re down there the landscape is totally different,” says Thor. “Colors would change. It wasn’t conscious; it was subtle or subliminal, but with some pots you can pick out which kiln it came out of by what’s on it.”

The Thoresons point out that in addition to echoing specific landscapes, pottery reflects the people who made it.

“I think that’s the awe-inspiring thing about making pottery – that the pots are always sort of the snapshot of the civilization that produced them,” Thor says. “These things are all going to outlive us. You get up in the morning and think, ‘I’m gonna be representing my civilization today!’” 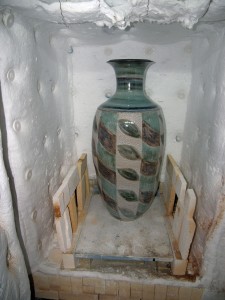 Fortunately for the Thoresons, this is a civilization – and more specifically, an immediate community – that they are proud to live in and represent. Of the pottery scene in Door County, Judy says, “People don’t realize how unique it is to have this abundance of people who have working studios and galleries in the same area.

“And we’re all friends,” she continues. The Thoresons met fellow Ellison Bay potters David and Jeanne Aurelius, for example, in a pottery class at Luther. In part because of this camaraderie, the Thoresons enthusiastically patronize and recommend the other potters on the peninsula. Gesturing to her coffee mug, Judy says, “I love drinking my coffee out of [Fish Creek potter] Abe [Cohn’s] mug.”

This community participation extends beyond the Thoresons’ fellow potters into the greater Door County community. For example, the Thoresons occasionally open their studio to the public, giving people a chance to get a glimpse behind the scenes of the pottery process. They also recently put a brick bread oven into the backyard of the gallery. Thor often makes fresh bread in this oven for special gallery events, and one Saturday a month the oven is open to the community.

As they move into and beyond their 30th anniversary, Judy and Thor plan to continue this process of engagement with the community and with the process of pot-making.