It is special when a pastor serves a congregation for more than a quarter century. And his retirement certainly calls for special recognition, which is the reason for the month-long series of events at Shepherd of the Bay Lutheran Church in Ellison Bay. 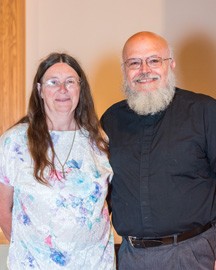 When the Rev. Dr. Bruce Foster came to Door County in 1989, there were two Lutheran churches in Ellison Bay – Zion and Trinity, now Tannenbaum Holiday Shop and Linden Gallery.

People who were members of the Zion and Trinity congregations were recognized at the July 5 service at Shepherd of the Bay. On July 12, members whom Foster baptized were recognized, and on July 19, recognition will be given to couples whom he married.

On July 26, Foster’s last official day in the pulpit, members whom he confirmed will be recognized during the morning service. At 1:30 that afternoon, there will be a Congregational Good-bye Event, including songs, skits, guest speakers and perhaps a few impromptu visitors, for the pastor, his wife, Angela, and their family. From 3:30 to 5:30 that afternoon, there will be an open house on the church grounds for the community to thank the Fosters for their service.

As a young man, Foster spent two years at Cambridge University in England, where he met and fell in love with Angela Maynard, a fellow student. They were married in 1974. He was ordained in 1976 in Minneapolis, and they spent the next three-and-one-half years in McGregor, North Dakota. The parish included four little churches with total membership less than the 88-mile round trip to reach them all, but he remembers it as a time he enjoyed a great deal.

In 1979, he returned to Cambridge and spent four years completing a PhD. From 1983 to 1988, he served a church in Lemmon, South Dakota, a small town the family loved and had no plans to leave soon.

During the summer of 1988, while Angela and their four children were visiting her parents in England, Foster received a phone call from a woman in Ellison Bay, whose name he did not immediately recognize, saying that her church was looking for a pastor and the bishop had told the call committee that any pastor with ELCA (Evangelical Lutheran Church in America) licensing could be considered. She finally established that she was a “niece of Uncle Bill,” Rev. Foster’s beloved uncle whose sermon he had preached some months earlier. She also recalled that they had met at age 11 at Vince Lombardi’s first game with the Packers.

Foster gave the caller permission to place his name on the list of possible candidates, but knowing that it was very unlikely for the bishop to approve of moving someone from so far away, he didn’t even tell Angela about the call. The family was planning a visit to his widowed mother in Milwaukee later that year when he received an invitation to come to Door County for an interview. They made the trip and were very impressed with the potential of the churches in Ellison Bay – and he got to see his mother.

Just before Foster arrived, members of Zion and Trinity had officially joined as one congregation. Neither church was suitable for expansion, and they made it clear to their new pastor that they wanted to build a new facility. The first five years of his pastorate were consumed with the construction of Shepherd of the Bay that was dedicated in 1994 and has since had two expansions.

“Ministers often speak of the ‘honeymoon period’ of a pastorate, when everything is fine,” Foster says. “Then things get down to real life. Our honeymoon with this congregation has never ended. Being involved with the lives of people – their strengths, their weaknesses, their joys and sorrows, every part of their lives – has been very important to Angela and me.

“It’s been a great privilege to participate in the local ministerial association and especially to work with the community Vacation Bible School that for the last 23 years has used an eight-year cycle of curriculum I wrote. When our sons were an appropriate age, I was involved with Boy Scouting for more than 10 years.”

Life beyond the parish has also meant a lot to the Fosters. For more than 20 years, he has taught winter classes at The Clearing, on subjects ranging from contemporary issues to theology and philosophy (from Blaise Pascal, 17th century French mathematician, physicist and religious philosopher, to Dan Brown, author of the Da Vinci Code and Angels & Demons).

Foster says Angela has served as pastoral assistant. She has taught every age group from preschool to residents at Scand. She has also made a major contribution to the community throughout the years their four children were in school at Gibraltar by attending countless board meetings and advocating for students. She has twice been recognized by the state – once as the Gifted and Talented Parent of the Year and once as the Special Needs Parent of the Year.

“We consider ourselves very blessed to have been able to participate in the Gibraltar School system,” Foster says. “Our children have certainly flourished there. Three were valedictorians of their classes and the other was class president.”

Elizabeth, the eldest, completed an undergraduate degree in math at Harvard, spent two years in the Peace Corps, returned to Princeton for a Master’s in international development and now works for the World Bank in Ghana. She and her two adopted African children are visiting her parents this month.

Jonathan, who holds an undergraduate degree from Cal Tech and a PhD in astronomy from Harvard, completed post-doctoral fellowships at Yale and just began a job with Legendary Pictures in Boston. The fact that he and his wife, Elisabeth, had the Fosters’ third grandchild this spring has influenced their retirement plans.

Benjamin completed an undergraduate degree in computer science at the Rochester Institute of Technology and a law degree at the University of Chicago. He and his wife, Allyson, live in Houston, where he is a corporate litigator.

Joanna, the Fosters’ youngest child, is legally blind. She majored in biology at Princeton and also has a journalism degree from New York University. She and her husband, Chad, live in Hoboken, New Jersey, where she works as a science journalist, but is currently pursuing a program in vocational rehab to enable her to work with the blind. Foster says that throughout Joanna’s college education, her mother spent hours on the phone every night, reading material to her. “The achievement of all the children is based on the fact that my wife has been a really hard task master. Had she not devoted so much time to their education, she would likely have continued teaching.”

“If everything works out right,” Foster says, “we’ll pick up a U-Haul on Aug. 8 and move to Boston.”

They plan to spend a year in an apartment near their son’s family. After that, they’re not sure. If Elizabeth and her children are transferred to the Washington, D.C., area, they may spend time there. Or they may take an extended vacation in England. “We’ll let the Spirit lead us where He will. There are very few Lutherans in Boston, but I plan to be an active lay person, along with pursuing intellectual interests and my hobby of computer programming. I completed a triathlon in 2006 and have a great desire to get back into that form. With a little writing, pursuing my athletic and computer interests, helping to care for a new grandson and being part of a church, I should have a pretty good, busy retirement.”

In the meantime, he’s got “true religion” about reducing his library, which has been reduced from 3,500 books to fewer than 500. Many have been sold, and several hundred have gone to a third-world missionary seminary project.

The Rev. Frank Maxwell, a retired ELCA pastor living in Egg Harbor, will serve as interim pastor at Shepherd of the Bay. Although July 26 is Foster’s last official day at the church, he’ll be back in the pulpit on Aug. 2. “I wanted just one more normal Sunday with the congregation,” he says, “with a regular service and communion.”