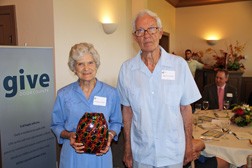 On June 26, the Door County Community Foundation hosted its annual Celebration of Giving at Horseshoe Bay Golf Club in Egg Harbor. One-hundred-seventy-five guests gathered that day to honor Spencer and Barbara Gould as Door County’s 2013 Philanthropists of the Year.

Spencer’s family has deep roots in the Door County community, so it was no surprise when Barbara and Spencer moved to Door County in 1988. Since their arrival they have been engaged leaders and benefactors of the American Folklore Theater, Peninsula Singers, Midsummer’s Music, the Ephraim Foundation, the YMCA, Northern Door Child Care, the Ridges, the Land Trust, the Peninsula Music Festival and too many other organizations to list here.

Every year at the Celebration of Giving, it is my responsibility as president & CEO of the Community Foundation to say a few final words before we adjourn until next year’s event. Failing to come up with any original or inspirational thought of my own, I decided to seek out Anne Emerson for inspiration. In addition to being a good friend of the Goulds, Anne was also the 2012 Philanthropist of the Year.

For those of you who haven’t had the joy of meeting Anne Emerson, think of her as the Johnny Appleseed of Door County. She wanders around the community, planting little seeds of inspiration everywhere she goes.

When asked what she admires most about the Goulds, Anne used three simple words to describe them – humility, intelligence and compassion.

Humility because Spencer and Barbara treat every person they meet with dignity and respect. Intelligence because they have an unquenchable thirst for knowledge that pushes their interests in all sorts of fascinating directions. And compassion because they give so much of themselves not only to help their friends and neighbors, but also through their support of charities that will serve those they will never personally know.

The words Anne chose to describe the Goulds made me think back to a dozen years ago this summer. I was in Toronto for a meeting of foundation executives, but at the same time across town the Dalai Lama was conducting a “teach in” for Buddhists. Now my minister would say that I’m a flawed Christian at best, which makes me even less of a Buddhist, but it’s not every day you get to hear the Dalai Lama speak. So I finagled a seat in the back of the room and settled in to hear what this man had to say.

The entire session was really nothing more than a series of questions posed to the Dalai Lama by his guests. Many of his comments were Buddhist teachings, concepts and ideas that were far over my head. But there was one exchange in particular which I will never forget. A young man asked the Dalai Lama to describe the essential human values. What are those characteristics to which every person should aspire?

The Dalai Lama’s response was quick and definitive.

The first ideal, he said, is compassion. It is to have empathy. A sympathetic consciousness of the distress of others and a sincere desire to alleviate it.

The second ideal is intelligence, because, he said, compassion is meaningless without the ability to learn and understand the nature of the challenge confronting another so that you can work effectively to help them overcome it.

And the third ideal, he said, is humility. Because before we can be open to the world of possibilities we first need to recognize our own limitations. Humility, he said, is what makes us teachable.

Compassion. Intelligence. Humility. To the Dalai Lama, this is a state of enlightenment. To Anne Emerson, this is what makes Spencer and Barbara Gould unique. To the rest of us, this is what defines a philanthropist.

Compassion. They have empathy for the less fortunate of our world and that drives them to step forward to help. Intelligence. All of them have a thirst for knowledge and wisdom and they put that to use for the benefit of our community. Humility. Each of them recognizes that sometimes “there but for the grace of God” is all that separates the haves from the have-nots.

These are the characteristics of the great philanthropists of our world. It was right that we honored Spencer and Barbara Gould. But to truly do honor to their generosity, it matters little what we said or did yesterday, unless it inspires us to live like them tomorrow.

Bret Bicoy is President & CEO of the Door County Community Foundation. In 2008, he and his wife Cari returned to Wisconsin to raise their six children in the community they love. Contact him at [email protected].