Jo Guenzel has spent three decades giving to the Door County community, helping to organize the first free clinic and women’s health program on the peninsula. On July 22, the Door County Community Foundation thanked her at its fourth annual Celebration of Giving, held at the Woodwalk Gallery in Egg Harbor.

Geunzel was named the Philanthropist of the Year, an honor previously bestowed on Ruth and Hartley Barker, Dave and Vonnie Callsen, Cynthia Steele, and Tim and Sue Stone. 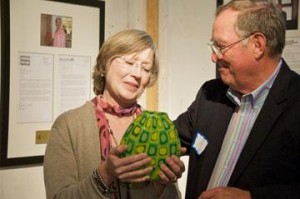 In addition to her commitment to primary, mental and integrative healthcare, Guenzel has worked with Helpline, advocates for the Hispanic community, and supports the work of Kimberley House and PFLAG.

In accepting the honor, Guenzel turned her attention to those she’s worked with, and said the gifts she’s given are dwarfed by those she has received in return over the years.

“I’ve been fortunate to work with some extraordinary people,” Guenzel said, then spoke of the gifts returned to her and other volunteers by the patients of the Community Clinic of Door County. She spoke of “the unspoken treasures received from the eyes of grateful patients and the warmth of hugs.”

Dick Egan, chairman of the foundation’s board of directors, presented Guenzel with a vase created by Popelka Trenchard Glass of Sturgeon Bay.

The Celebration of Giving is held annually by the foundation to honor and thank those who give back to make life in the Door County community richer and fuller. By honoring Guenzel, Egan said the foundation hoped to inspire others to give.

“It’s not just about giving money,” Egan said. “The contributions made by volunteer workers and volunteer board members are critical to this community.”