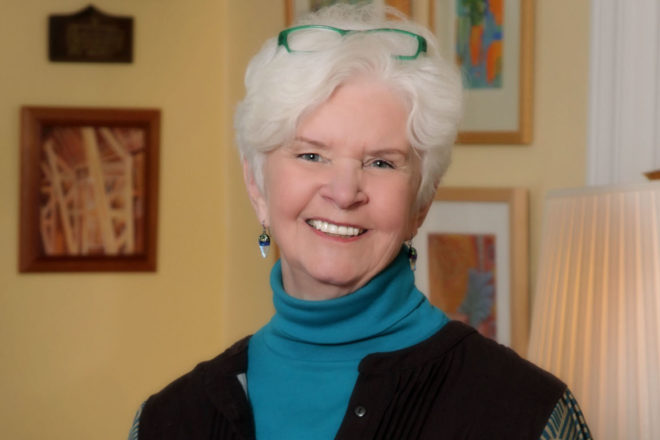 Those who knew Julia Bresnahan (1944-2018) primarily as a teacher, champion and curator of art and host of the annual Black and White Party in Door County have a delightful surprise in store for them in the retrospective exhibit of her own works of art, Julia Bresnahan: A Life in Art.

Her prints and paintings in this show cluster around several themes:  the effects of light on objects and walls in her barn at Shady Lane farm; the shapes of houses and their topsy-turvy relationship to the tissue paper dress patterns on which they rest; the outsized energy of women; the appearance of saints in icons; and the lives of plants, often in elaborate filigree. Bresnahan was above all a master of the delicate line in pencil or pen and ink drawings – the flourish that developed into tracery and ornament to attract the eye and bring the mind of the beholder to meditation.

The most moving work, however, is a large painting titled “Memories of Forgetting,” that seems to show the many, possibly separate, lives contained by one house. Although a viewer need not have known Bresnahan to enjoy this show, those who did know her will find much to ponder and admire – including a serious self-portrait and portraits of the artist by Franne Dickinson and Bresnahan’s closest friend and colleague, Mynn Lanphier. 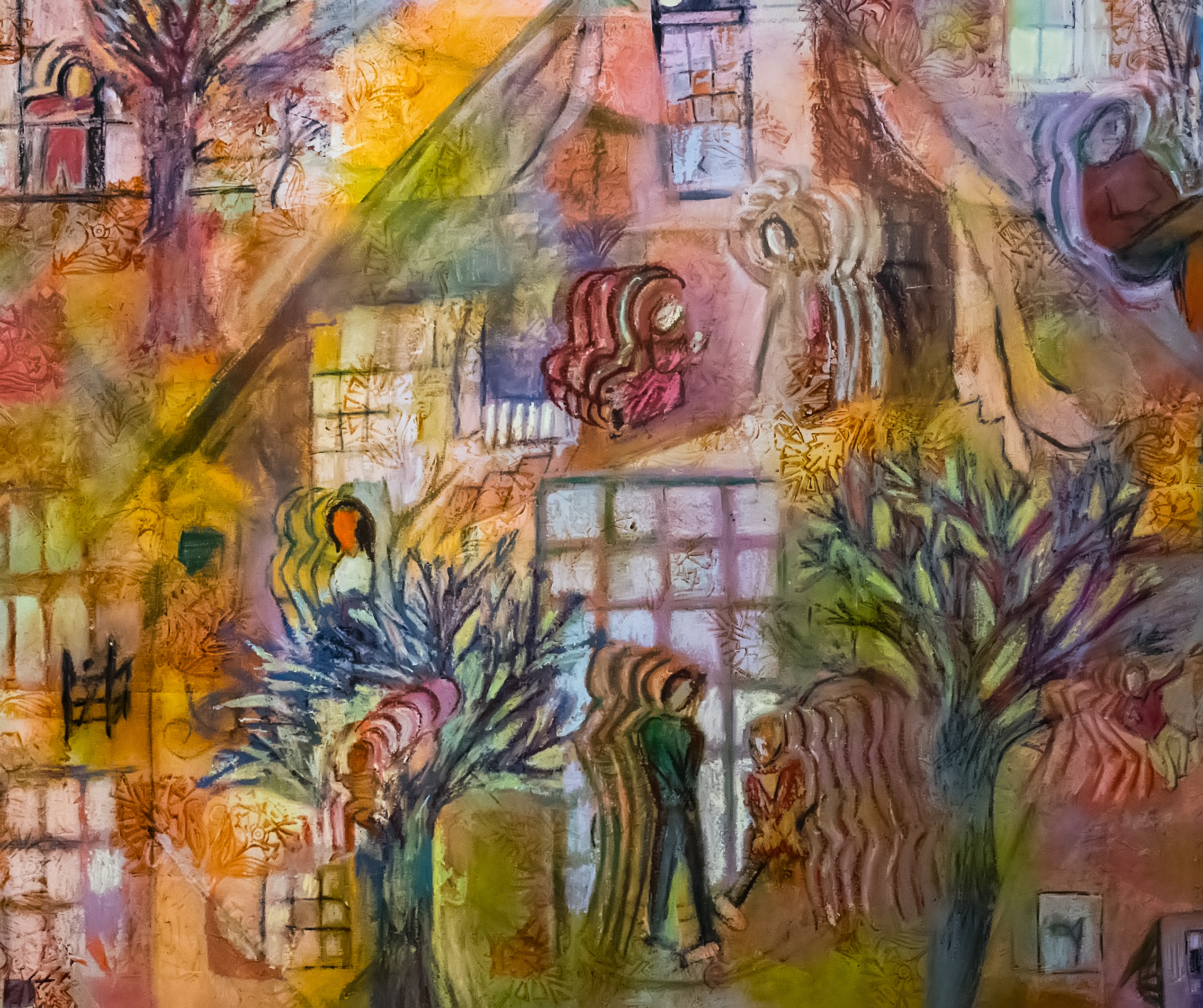 “Memories of Forgetting” by Julia Bresnahan. Photo by Len Villano.

Bresnahan was surrounded by art at home, and as a child, she studied with Sister Thomasina Fessler at St. Mary’s Academy in Milwaukee. Her sister Sarah Van Roo writes that “art was her North Star” as she navigated a childhood filled with moves to different cities. She found a home in Whitefish Bay as a teacher of art after earning degrees at Cardinal Stritch. And she found her métier as a mentor to young artists and rebels in the high school, drawing out of them art portfolios that gained them entry to the best art schools.

Following her mother, who had worked in Door County as a waitress in the 1940s, Bresnahan came to Door County as a part-time resident in the ‘60s, one of the young artists drawn by the vision of Madeline Tourtelot, the founder of the Peninsula School of Art. With others who shared Tourtelot’s dream and a small Tourtelot grant, Bresnahan became part of a foundational group of artists in the county. 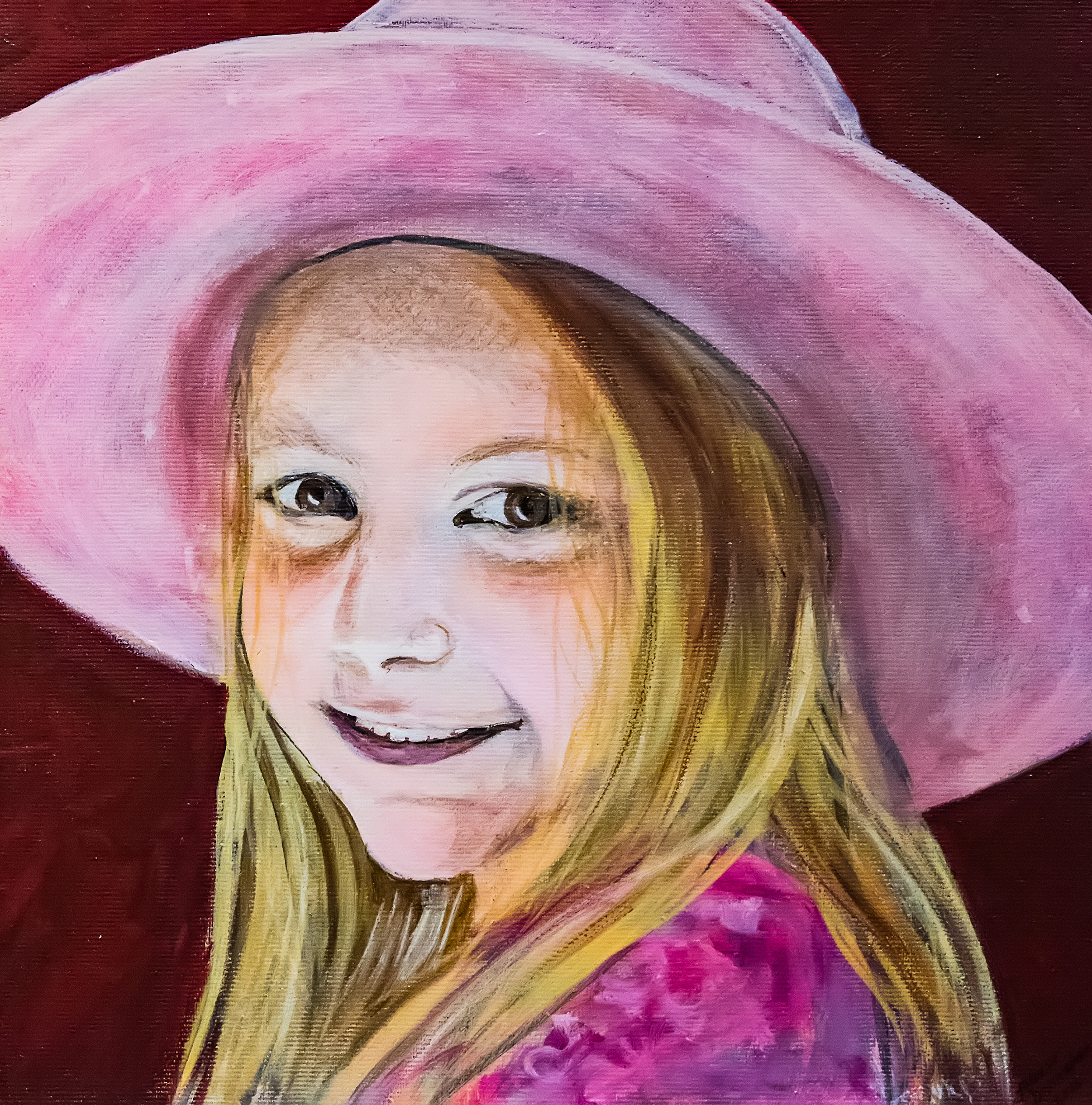 “Hannah at 10” by Julia Bresnahan. Photo by Len Villano.

Bresnahan was known as a painter, printmaker and pen and ink artist who worked in acrylic, oil, inks, gouache, oil pastels and mixed media. A coloring book of her doodles is for sale at the Unitarian Universalist (UU) Fellowship, where she was a member and Director of the Gallery. It is also available at the Hardy Gallery, Peninsula School of Art, White Gull Inn and Woodwalk Gallery.

In addition to teaching at the Peninsula School of Art, she served as a member of the Board and became a founding member of the Door County Women Artists Salon. She also served as a Board member of the Hardy Gallery and taught classes at The Clearing. Through the years, she exhibited her work in countless shows and galleries in Door County; recently she was represented by Woodwalk Gallery.

The exhibit was curated by Jillaine Burton of Woodwalk Gallery with assistance from Karon Winzenz, the new UU Gallery director and Sarah Van Roo. Many of the works are for sale. The UU Gallery is open 1-4 pm, Monday through Friday. The exhibit is located at Unitarian Universalist Fellowship Gallery, Water St., North Ephraim, from Oct. 7 to Nov. 25.