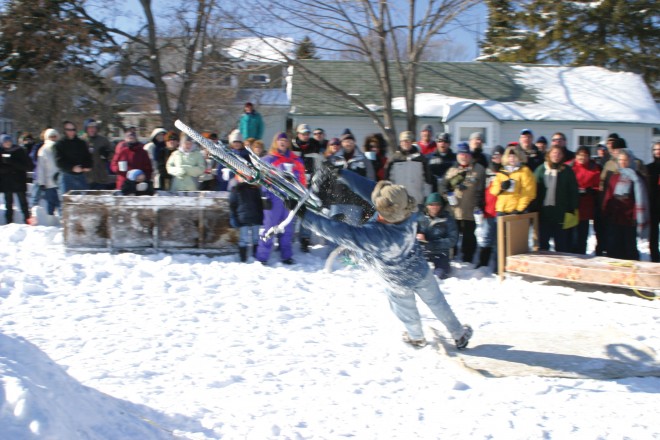 A competitor in the popular “Bike Toss” goes for distance.

One of the most common questions I hear from visitors is, “What do you do up here in the winter?” This question is usually accompanied by an expression made up of part confusion and part sympathetic dismay. Tourists who have never been to Door County in the winter come up with some far-fetched ideas about winter life, picturing locals doing nothing but staring at each other, having to drive to Green Bay for groceries, gas and haircuts, and not having to work. These misconceptions are humorous, but quite off base. The winter is quiet; however, it’s our time to prepare for the next season. There are trade shows to attend, building maintenance to see to, long ignored paperwork to file and, at last, a chance to breathe.

That said, it doesn’t mean we don’t get a little restless after the holidays. Back in the late ‘80s, several Fish Creek locals decided to do something about it by creating Winter Games. It was intended to be a fundraiser for the Fish Creek Civic Association (FCCA) promoting off-season business as well as celebrating winter sports – some of the non-traditional variety. The original planning meetings took place at the Merkel household. Ron Merkel of Nor Door Sport and Cyclery and also the former president of the FCCA, chaired the games along with the help of his sons Brian (Stretch) and Jayson (Ward), Paul Woerfel of Homestead Suites, Dick Skare of The Cookery Restaurant, Bob Lautenbach of Orchard Country Winery, the late John Redmann of The Settlement Courtyard Inn, and Doug Butchart of Thumb Fun. The original games took place the first Saturday and Sunday of February at the Fish Creek Beach where a huge tent was erected on the icy bay.

Dick Skare chuckles as he remembers the earlier games. “We had never done anything like this before, so we didn’t know what to expect; however, it was a success from the beginning. Who would have thought that the Bike Toss would have been such a hit?” The Bike Toss still remains a crowd favorite over 15 years later. Other favorites include the Minnow Races, the infamous chicken game (which was eliminated from the line-up by the Health Department), bed races and ice volleyball. “There was also the year that water started leaking up from the ice, so someone drilled holes into the ice to let the water out. Obviously, that didn’t work and the flooding got worse,” says Skare.

The Cherry Pit Spit, organized by Bob Lautenbach and the Wisconsin Cherry Grower’s Association, was another huge draw. Bob was president of the association at the time and felt that the Winter Games was a perfect place to hold the annual Cherry Pit Spit competition rather than at the county fair. Bob recalls, “The earlier days were really a lot of fun. At the planning meetings, we were enthusiastic about what we could do with the games.” One of the ideas they came up with was inviting the national Cherry Pit Spit Champion to Fish Creek. “The pit spit was a big deal, so when the national champ arrived in a limo and walked on the red carpet, people went crazy. We even had to set up bleachers so that the whole crowd could see the competition.”

Those coming to Winter Games got used to seeing the same faces, the same volunteers serving brats and beer, Robin Butchart organizing the information on the various competitions and handling the live raffle items, Doug Butchart running the carnival games, and John Redmann emceeing. John, considered “the voice” of Winter Games passed away in December of 2003, but not before having emceed from the original event to the 2003 games. Along with his sometimes silly running commentary about the events and raffle items, he also participated in the Snowshoe Dance. The Snowshoe Dance, which continues to be a popular event, must be witnessed in order to be fully appreciated. Its appeal is so wide, in fact, that to promote the games in 2002, John along with “Digger” DeGroot (former owner of Digger’s Grill & Pizza) and Jorna Taylor drove down to Green Bay to appear on Good Day Wisconsin. They left Fish Creek at 4:00 am and drove down in a blizzard, all to be filmed snowshoe dancing on the roofdeck of the Channel 11 TV station for less than a minute.

Jeff Taylor, of J. Jeffrey Taylor, assumed John’s role as emcee in 2005, but elected to be a judge rather than a participant of the Snowshoe Dance. Jeff is also known for his role as the founder of the Taylor Made Chili Cook-Off. There were over 40 participants last year and the number of contestants seems to grow each year, along with the degree of competitiveness. Apart from coveting the title of best chili recipe, contestants seem to be more motivated by the creative and wacky trophies handmade by Taylor. Bonnie Smith of Bath Essentials has placed in the top three several times and proudly displays her trophies at home.

In 2004, Mitch Larson of On Deck and Andy Coulson of The White Gull Inn pitched the idea of extending the games into a 10-day winter festival. Mitch and his wife Nancy spent some time in Lake Tahoe where they have Snowfest, a 10-day winter celebration with events happening all over town simultaneously. They wondered whether the concept couldn’t be adapted in Fish Creek. Since many of the businesses in town are open anyway, the idea of a longer festival appealed to everybody. Thus, in 2005 the Fish Creek Winter Games became the Fish Creek Winter Festival. To help commemorate the occasion, Cy Turnbladh of Hand’s On Art Studio created a metal torch that was attached to a large snowman at the Noble House. The torch was ceremoniously lit on the first Friday night of the festival and ceremoniously extinguished at the end of the 10 days.

This extended schedule presented every business the opportunity to come up with their own special events. Super Shopping Night was created by the merchants in Fish Creek, Hands On Art Studio hosted two Rock & Roll Art Nights, The White Gull Inn continued their Wednesday folk concert series, the C & C Club and O’Meara’s Irish House hosted live Celtic music and a kilt competition, and the ParkWay Supper Club hosted a winter beach party. One of the more exceptional events was Door County Idol, which will continue again this year. Kristi Nelson of Digger’s Grill & Pizza is sponsoring the event, which takes place on February 3rd from 7:00 – 9:00 pm. The contestants (ages 15 – 19) are eligible for a $500 grand prize. “We are really excited about the competition!” Kristi exclaimed. “It really gives a chance for locals to exhibit their talent. Last year’s event was such a huge success, so we can’t wait to see what happens.”

Kites Over The Bay was another attraction added in 2005 as the main event of the second Saturday and will continue for the 2006 festival. Toby Schlick and Valerie Murre-Schlick of Fish Creek Kite Company were inspired by having seen Kites on Ice in Madison, a large kite spectacular with a strong following. There will be at least seven flyers participating, including Al Sparling who travels around the world exhibiting kites that are sometimes as big as houses.

Andy Coulson, along with others like Terry Bolland and Brian Hackbarth of the Summertime Restaurant, has been in charge of organizing the food and beverages for longer than he can remember and summarizes the experience rather succinctly by saying, “What I like most about Winter Festival is the camaraderie of working with our neighbors on a common cause. It may sound odd, but we are all so busy the rest of the year that we often blow by each other with hardly time to stop and say hello. When you have attended what seems like endless committee meetings with someone, stood by them in the cold all day, slung brats and beer and tramped through snow banks hauling tents and other heavy equipment until you are so tired you become punchy, then you can’t help but get to know them. You have fun with them, and you bond. By the end of the festival each year, I’ve made a lot of new friends, many of them tourists attracted to the village, but just as many of them people who live down the street.”