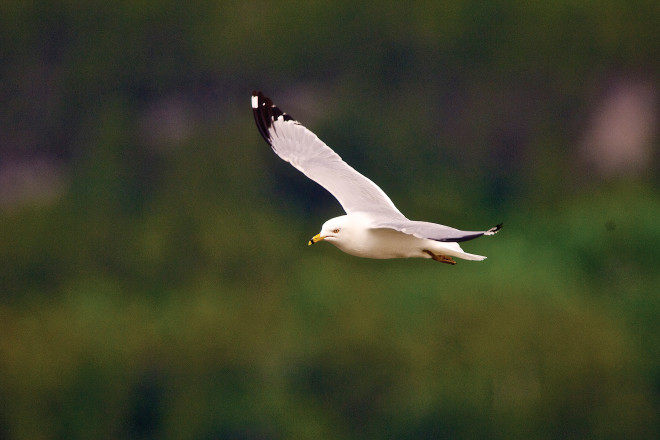 They may not be as celebrated, but seagulls are as Door County as the cherry. They soar over our fields, nest on our shores and steal our French fries. They inspire our artists, embellish Door County t-shirts and squawk when we get too close.

Maybe it’s because of those lost fries, or because of the white globs left on our windshields, that we turn a cheek to those ubiquitous birds. Maybe it’s because they’re seemingly everywhere and lacking in mystery. Either way – seagulls are here to stay, and we decided to give them the attention they deserve. 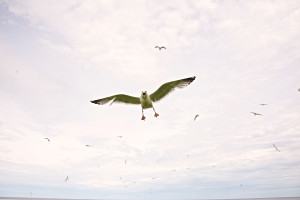 Keep reading to find stories on a scientist studying Herring Gulls on Big Sister Island and an ecological description of the species. Plus, take our “seagull” quiz to test your “bird brain.”

[Attention birders, ornithologists and nature know-it-alls:  There’s no such thing as a seagull, we know that. We’re using the term colloquially. For information on Bonaparte’s, Great Black-backed, Herring and Ring-billed Gulls, turn to page 23. “They’re seagulls to everybody – there’s no such thing,” said biology professor Ray Faber. “That’s what I have to tell folks.”]

It’s a rare man who will don a hard hat to get closer to gulls. Ray Faber, a biology professor at Saint Mary’s University of Minnesota, is that man.

Twice a year for the last 40 years, he’s gone out to Big Sister Island near Ephraim to study Herring Gull health and track the contamination they pick up from the environment.

“I became accustomed to working with gulls and getting screamed at and having birds flying over my head and defecate on me, but not hitting me,” Faber said. “And then it came to the point I had to get rid of the scar tissue by wearing a hard hat.”

But the gulls’ aggressiveness is a good sign – it means the birds are healthier. Gulls that dive-bomb Faber and try to knock him down probably have picked up fewer contaminants from the environment than the ones that just squawk at him. 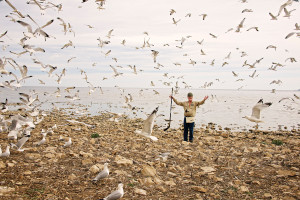 Faber studies seagulls to track the health of their habitat. Because the birds eat high on the food chain, chemicals from pesticides and manufacturing get concentrated in their systems. Plus, Herring Gulls live across the Great Lakes so scientists can study them to track contamination across the region, and the species is so plentiful the research won’t affect the population.

Faber started studying the island’s gulls when a volcano eruption interrupted his research trip to Iceland to study puffins. He was interested in environmental contamination, so he picked the spot with some of the highest concentrations of contaminants in the world – Green Bay, where pesticides from the orchards meet with pollution from nearby paper mills. Faber goes out to Big Sister Island twice a year to observe egg hatching, collect eggs to send to a Canadian lab and band birds in order to track them for future observation. His research is part of a larger study Environment Canada has conducted since 1974 called the Great Lakes Herring Gull Monitoring Program.

The study collects information from 15 sites around the Great Lakes, from Faber’s birds on Big Sister Island to colonies in Lake Superior, Erie, Huron and Ontario, plus some in the Detroit, Niagara and St. Lawrence Rivers.

The program was started to study “legacy chemicals” such as DDT, a powerful pesticide that persists in the environment for a long time. In the 1970s, scientists noticed very few Herring Gulls were hatching, and a lot of birds had deformities and weak eggshells.

“As a response they decided to monitor a number of different colonies for a long time period,” said Shane de Solla, Environment Canada eco-toxicologist. “Hence, the Herring Gull Monitoring Program was born.” 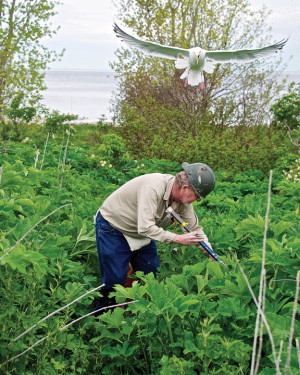 The presence of most of those chemicals causing problems in the early ’70s has dropped significantly, thanks mostly to laws that outlaw some of the nastier, likely cancer-causing ones such as DDT and PCBs (fire-resistant chemicals added to products until the 1970s).

Although he can’t guarantee it, Faber said he was told his data was important in getting PCBs banned, and his research has shown the birds have gotten healthier since.

“As soon as PCBs were banned, [contaminant] drop-off began very, very quickly,” Faber said. “The quality of nests has improved greatly, the egg survival and hatching percentage has gone up significantly, and especially the aggression in the birds has increased dramatically.”

Banning PCBs and DDT was a step toward a healthier environment, but Faber said the work isn’t done. Green Bay is still a hotbed of contamination.

“[There are] lingering PCBs, but there’s a variety of other chemicals in there,” Faber said. “Contamination is certainly improved, but it’s not gone. We still see occasionally deformed young, which is a solid indication that there’s a chemical influence.”

Because it’s been running for so long, the Herring Gull Monitoring Program allows scientists to basically go back in time and see which chemicals were present in the environment over the last few decades. Scientists kept the eggs that were collected in the early 1970s and can retroactively test those eggs for chemicals they weren’t looking for originally. That makes the program stand out among other contaminant monitoring studies. 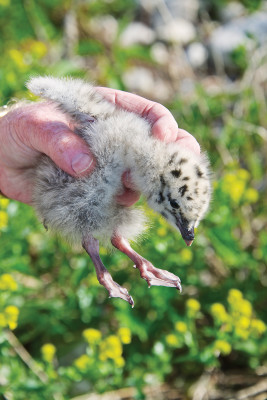 “The Herring Gull Monitoring Program is arguably the longest-lasting monitoring program,” de Solla said. “We can go back to the early ’70s, and not everyone can do that.”

Looking back in time at chemicals in the environment allows scientists to study the effects of manufacturing and agricultural practices over the years.

“The concentrations of these different compounds are going up and down based on the patterns of production and use,” de Solla said. “By and large most have been declining, but we’re starting to look at newer and more novel compounds.”

Faber said cleaning up the environment would likely take a national policy to ban certain chemicals that could affect human health. Many of the contaminants are endocrine disrupters, meaning they disrupt hormone function.

“I think [endocrine disrupters] are a major health issue,” Faber said. “Just as a starting point, they probably contribute to the development of breast cancer. They extend into reproductive problems.”

So his work isn’t over. As long as the chemicals are out there, and as long as he’s able to find a place to anchor his boat, Faber plans to keep studying gulls.

“We have a very unique record,” he said. “This is, to my knowledge, the longest study of contaminants in aquatic birds in the United States, perhaps in the world.” 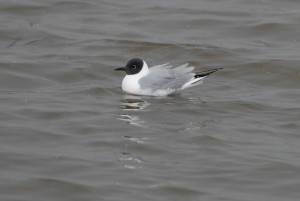 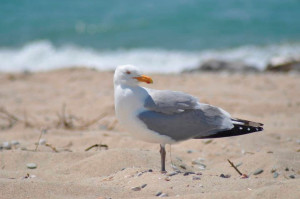 Herring Gulls are the birds professor Ray Faber studies – the ones that dive-bomb him when they’re healthy and he’s too near their nests.

There’s no such thing as a “seagull,” and when someone references one they’re probably talking about a Herring Gull. Herring Gulls are abundant, not afraid of people and likely the “rats with wings” that inch too close to your picnic. They nest in Door County and live here year-round, making them a common sight on the peninsula.

HABITAT: Herring Gulls are the most widespread gull in North America and are found in diverse habitats, from open water to landfills to farm fields. 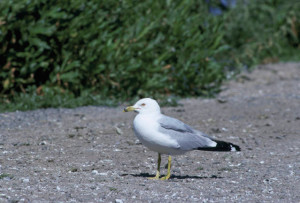 HABITAT: Ring-billed Gulls are found in diverse habitats, from open water to landfills to farm fields.

DIET: Ring-billed Gulls are scavengers, and tend to eat just about anything. They particularly like insects, grubs, earthworms, sewage, garbage, rodents, fish, and what they can pluck from farm fields like cherries, blueberries and strawberries. 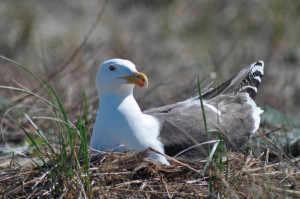 HABITAT: Great Black-backed Gulls are found on beaches, estuaries and lagoons, and sometimes on inland lakes and rivers.

Information from A Guide to The Birds of Door County, the National Audubon Society and the Cornell Lab of Ornithology. Photos courtesy of the U.S. Fish & Wildlife Service.

1. There is no such thing as a “seagull”

2. The Herring Gull is best identified by its

b. Beefy size and shape

c. Black coloring under its wings

a. Showed a preference for magnetic bearings that would take them in the direction of their fall migration

b. Tested positive for avian flu

c. Were capable of leaving the nest and finding their own food source

4. To identify an adult Ring-billed Gull, look for

a. A black body with pale pink legs

b. A mottled brown body with reddish legs

5. About how long does it take a Herring Gull to reach its adult plumage?

6. Bonaparte’s Gulls have black heads only during breeding years

7. What is the Great Black-backed Gull’s primary range?

8. The adult Great Black-backed Gull has a mark that distinguishes it from other gulls. What is it?

b. A red spot on the lower mandible

9. The Herring Gull typically lays three eggs at a time called a

10. About how many species of gulls are there (not including sub-species)?

Answers to Test Your “Bird Brain”