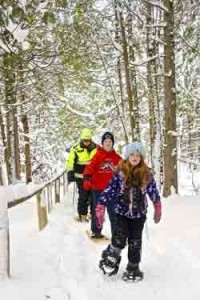 “Wish I were there!” Marybeth Lauer Swanson of Des Plaines, Ill., posted on the Door County Visitor Bureau Facebook page under a photo of a group snowshoeing in Door County.

She is just one of many who have responded to the winter wonderland that has enveloped the landscape and been captured in photographs that have been posted to various social media.

“Social media has certainly taken over in a lot of ways as a way to get information out there immediately,” said Jon Jarosh, director of communications at the Door County Visitor Bureau. “We saw on our social media, especially on Facebook, quite a flurry of activity, pun intended. Winter photos that were posted got some incredible engagement for us and had people asking about trails and that sort of stuff, so we certainly did see an increase in social media. I think with each new season, we are finding better ways to utilize it.”

Over at the Landmark Resort in Egg Harbor, receptionists have been fielding telephone calls about the wintry conditions.

“I can definitely say that the snow and weather conditions affect business,” said Landmark’s General Manager Patti Taylor. “We have noticed an increase in incoming telephone calls since we’ve had this last snowfall, either guests that already have reservations or new guests calling in to ask about snow and trail conditions for skiing and snowshoeing. They’re asking, ‘Are the snowmobiles trails open? What are the ski trails like?’ We do our research every week and try to keep up on what the trail conditions are.

However, she adds, while the snow might attract visitors, the sub-zero temperatures do not.

“I just wish the temperatures would warm up. The cold does not help us, but the snow does,” she said. “From what I understand, from now on warmer temperatures are coming. This is the average coldest week we have every year. I’m hoping February and March are a little warmer and snowy so we get some additional business in here.”

Lars Johnson at Al Johnson’s Swedish Restaurant in Sister Bay pointed out that Sister Bay businesses have their own special challenges this winter.

“Although it’s gorgeous outside it’s too early to tell if the snow will help business this winter,” he said. “The economy is still a little soft and, of course, the road construction in Sister Bay continues to make our winter business challenging. We still have a lot of winter left and I’m sure the snow will help.”

Erin Brown, assistant superintendent at Peninsula State Park, said people have been flocking to the park to enjoy the snowy conditions.

“With the snow, there’s certainly a lot to see and do in the park,” she said. “A lot of people come to Door County just because it’s Door County, but I’m certain the fact that we have great snow conditions brings people to the park. It’s beautiful out in the park. The fresh snow is clinging to the trees and it just makes a beautiful experience traveling through the park. All of our winter opportunities are available, which we don’t have every winter.”

Leif Hagman, manager of the Sturgeon Bay Nor Door Sport & Cyclery, said rentals of winter recreational equipment has been strong.

“We had an early push for rentals this year and with this new snowfall, we can only hope it will keep going strong,” he said. “Here in Sturgeon Bay, I’m seeing mostly skis. I have some snowshoes here, but I think the Fish Creek store, for the quantity of people that hit Peninsula (State Park), they’ll see both skis and snowshoes.”

Mark Schuster of Bay Shore Outfitters in Sister Bay said his store has been doing well with winter rentals and with its snowshoe challenge to hit all the trails in Newport State Park. They’ve held two snowshoe hikes at the park and the third is on Feb. 8 (visit the store’s Facebook page for details).

“It’s been a wonderful winter in many different ways, the vibe, the feeling, it’s so much nicer with the white stuff on the ground,” Schuster said. “This is the way it’s supposed to be.”