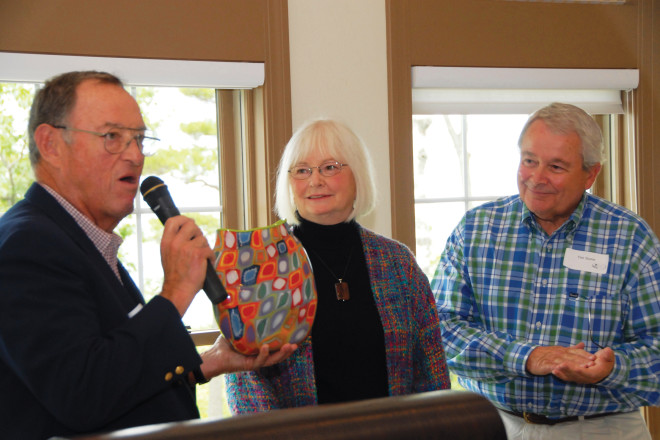 When Tim and Sue Stone stood to accept the Door County Community Foundation’s honor as the Philanthropists of the Year in July 2008, they shared sentiments echoed often by members of the Door County community.

“When we talk to our friends around the country,” Sue Stone said with a wide smile, “they can’t believe the things we get to do up here.”

She and her husband referred to the arts, music, and performance organizations that bring so many opportunities that few rural areas ever experience.

The Stones bought property in Door County in 1980 and built their home in 1984. For 20 years they came up on weekends from Appleton, growing increasingly involved in the non-profit community. In 2004 they moved permanently to the peninsula and didn’t shy away from doing the nitty gritty work – stuffing envelopes, making calls – that all volunteer organizations rely on.

“We wanted to get involved and help where we could,” Sue said.

The Stones were honored for their roles as board members and contributors to The Clearing, American Folklore Theatre, Peninsula Music Festival, and the Door County Land Trust, among others. It’s these non-profits, and the dozens more like them, that give Door County life the culture it boasts and preserves the environment it thrives on.

Each year, the Door County Community Foundation honors an individual or family responding to the call of support from these groups as its Philanthropist of the Year. Past honorees include Hartley and Ruth Barker, Cynthia Stiehl, Marian Hislop, and Vonnie and Dave Callsen. In the ceremony at Horseshoe Bay Golf Club in Egg Harbor, the Stones were hailed as contributors who care little about receiving recognition, but simply “want to get things done.” In fact, they initially declined the award when president Dick Egan approached them about it.

“We told him there were certainly others who deserved the award,” Sue said. Egan explained that the idea was to honor someone who supports non-profits in all facets; those who roll up their sleeves and help with the often painstaking work such organizations require to survive.

“We said yes with the hope that it will spread that message and inspire others to do something,” Sue said. “Everybody can do something for the groups that mean something to them. You can’t expect it to be there for you if you don’t.”

Tim Stone said he and his wife were humbled and honored to be included with the roll call of previous winners and said giving back was their responsibility for reaping the rewards of living here. They consider themselves fortunate to live in a small community, yet one with a diverse offering of arts, environmental and educational opportunities.

As board members and contributors to conservation, theater, and music organizations, the Stones fulfill the community foundation’s goal of supporting the multiple facets of the Door County community. The foundation announced a new approach to achieving that goal at the event, and foundation president Dick Egan opened the ceremony by speaking about the importance of providing support to varying segments of the Door County community.

“At the community foundation, we are aware that there’s more than one segment that’s important,” Egan said.

He said the foundation works to provide a balance between needs like domestic violence prevention and health care with creative pursuits such as arts and music.

“We try to take a holistic approach to improving the community,” Egan said.

The foundation then unveiled five new targeted granting programs intended to better funnel giving to specific segments and needs. Coming in the form of Community Impact Funds, these include separate funds for the Arts, Environment, Lifelong Education, Children and Youth, and Health and Human Needs. The funds were endowed with six-figure gifts from one seasonal resident and one year-round resident of Door County.

More information about the Door County Community Foundation can be found at www.doorcountycommmunityfoundation.org or by calling 920.746.1786.