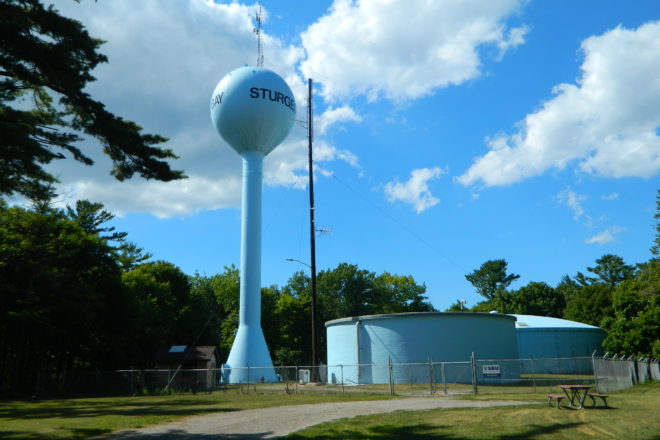 U.S. Cellular is seeking to rent space from the City of Sturgeon Bay to locate a cell tower next to the water-tower facilities at Big Hill Park. Photo by Kevin Boneske.

Sturgeon Bay’s Finance/Purchasing and Building Committee is recommending that the city lease out land at Big Hill Park – the highest point on the east side – for a 170-foot cellular tower to be built there.

The committee’s July 26 recommendation supports leasing U.S. Cellular a 3,600-square-foot site for $12,000 a year, subject to the tower not being illuminated or causing interference with the existing Sturgeon Bay Utilities (SBU) communications equipment on the adjacent water tower.

U.S. Cellular proposed leasing the site for $7,500 a year, with 10% increases every five years; or, as an alternative, the company indicated it would accept an easement to place the monopole tower there for a one-time payment of $140,000.

However, community development director Marty Olejniczak said the lease the committee favored is along the lines of the lease SBU recently entered into for a cell tower next to a water tower on South Neenah Avenue in the Industrial Park, which is for $1,000 per month, or $12,000 per year.

The cell tower at Big Hill Park would be about the same height as the antenna on top of the water tower and would not have to be illuminated because its overall height would be lower than 200 feet.

Given the distance from residences near the park and the number of pine trees near the site, Olejniczak said the tower would not be very noticeable year-round to those living in nearby homes, with it rising above the tree canopy and being visible from certain vantage points during daylight.

Though much of Big Hill Park is restricted from commercial use by a covenant related to the property being donated to the city, the proposed site for the tower isn’t within that restricted area.

The preliminary project plans call for having a fenced area for the cell tower and an equipment shed next to the existing fenced area for the water-tower facilities. Olejniczak said further surveying and engineering are required to confirm that the project is workable in that location.

State laws on locating communication towers place limits on how cities may regulate cell towers, such as not allowing the towers to be designated as a prohibited use in any zoning district. The laws make it difficult for the city to reject a specific site or direct U.S. Cellular to a certain location.

U.S. Cellular indicated in a statement provided to the Peninsula Pulse that it is “exploring the site at Big Hill Park to relocate a nearby cell site that no longer meets our long-term needs to provide service to the area.”

“This new location gives us the opportunity to enhance our service and make sure the Door County community stays connected to the people and places that matter most to them,” the statement read.

If the site were not approved, Olejniczak said U.S. Cellular could seek to build the tower on nearby land – and the project’s visual impact to the area would still occur – without the city receiving any lease revenue.

The Sturgeon Bay Common Council is expected to consider the lease recommendation during its Aug. 16 meeting.