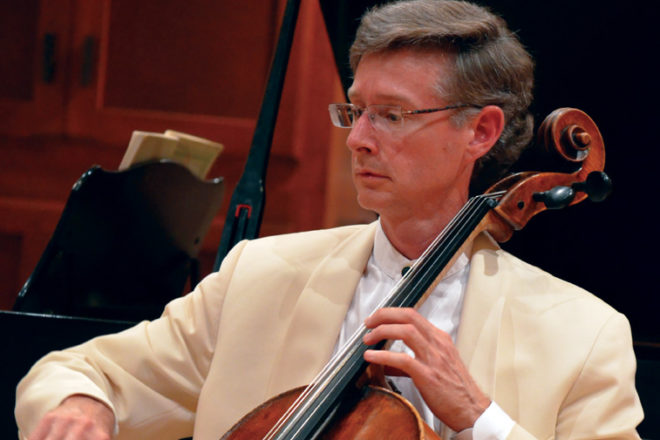 Midsummer’s Music cellist Walter Preucil celebrated his 500th concert with the organization on July 21 during the “Bach at 333” program at the Old Gibraltar Town Hall in Fish Creek.

In 1991, Preucil joined the original Midsummer’s Music ensemble for the inaugural concerts that played at the homes of Diane and Peter Trenchard in Sister Bay and Adele Carley-Hake and Carl Hake in Sturgeon Bay. From those two performances, the Midsummer’s Music season has expanded throughout 28 years to nearly 40 concerts.

Preucil reflected on his accomplishment by saying, “For 28 summers, I have been able to enjoy wonderful music making in Door County thanks to the great job Jim and Jean Berkenstock and all the Midsummer’s staff have done over the years.”

The cello is present in nearly every piece of music Midsummer’s performs, and, because of this, Artistic Director Jim Berkenstock recently referred to Preucil as “our Iron Cellist.” Among the musicians, Preucil is known for his sense of humor and the occasional prank.

Midsummer’s Music is currently on break until concerts resume Aug. 26, and Preucil will play in every piece of the eight concerts that lead up to Labor Day. Tickets can be ordered online at midsummersmusic.com or by calling 920.854.7088.