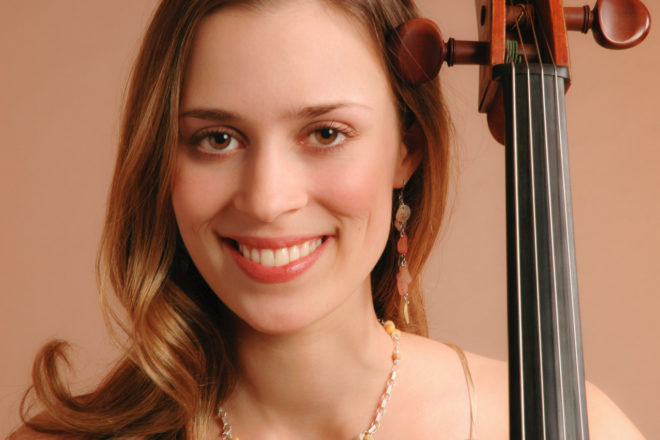 This summer, Door County will welcome Boston-based Natalie Haas, one of the most sought-after cellists playing traditional music today. She’ll perform as the guest artist for Fiddlefest – alongside regular contributor Vidar Skrede of Norway on Hardanger fiddle and guitar – on Wednesday, Aug. 25, at Egg Harbor’s Kress Pavilion.

Haas and her long time musical partner, Scottish fiddler Alasdair Fraser, have toured as a duo for more than 20 years, wowing audiences at festivals and concerts worldwide with their distinctive sound. Their first album together, Fire & Grace, earned Best Album of the Year honors in the 2004 Scots Trad Music Awards.

As a studio musician, Haas has been a guest artist on more than 80 albums, including those of Cape Breton fiddler Natalie MacMaster; Irish greats Altan, Solas and Liz Carroll; and Americana icon Dirk Powell. A graduate of the Juilliard School, Haas teaches privately and at Berklee College of Music in Boston, and she is one of the most in-demand teachers at fiddle camps across the globe.

Vanessa McGowan spoke to Haas ahead of her performance at Fiddlefest.

Vanessa McGowan (VM): What inspired you to start playing cello?

Natalie Haas (NH): I began playing at age nine with the Suzuki method after my younger sister [Brittany Haas, now the fiddler with Crooked Still, Hawktail and the Dave Rawlings Machine] had been playing violin for a year. My family discovered that music was a great thing to have in your life, and my sister’s violin teacher recommended the cello for me so we wouldn’t be competing with each other.

VM: How did you keep yourself creatively inspired and fulfilled during the COVID-19 quarantine?

NH: Luckily, Alasdair Fraser – my bandmate of the last 20-plus years – and I had just recorded an album a month before the quarantine began, so working on editing that music and getting it out into the world kept us both going for most of 2020! I also loved having all the time at home to get into practicing again – a luxury it’s often hard to find time for while on the road.

NH: It will be my third actually, after a chamber music festival in July and the Milwaukee Irish Fest the weekend before Fiddlefest.

VM: What are you most looking forward to in being part of the festival?

NH: Very much looking forward to collaborating with Vidar and Eric [Segnitz, Fiddlefest organizer]. I’ve been aware of Vidar’s playing, as well as tunes he’s written, for years now and have never gotten the chance to make music together before this! Making music with people is quite simply the best, and I am jumping at the opportunity after playing mostly by myself at home for the last year and a half.

VM: What do you hope aspiring cellists and folk musicians will get out of attending your concert at the Kress Pavilion?

NH: [I] hope if there are any cellists in the audience that they will be inspired to look into using the cello as a folk instrument. It often gets relegated to the classical realm, yet it can do so much more!

VM: If you could open a concert for anyone, who would it be?

NH: My favorite band since I was a teenager has been the Swedish folk iconic trio – now duo – Väsen. This would be my greatest honor to open for musicians I respect so much!