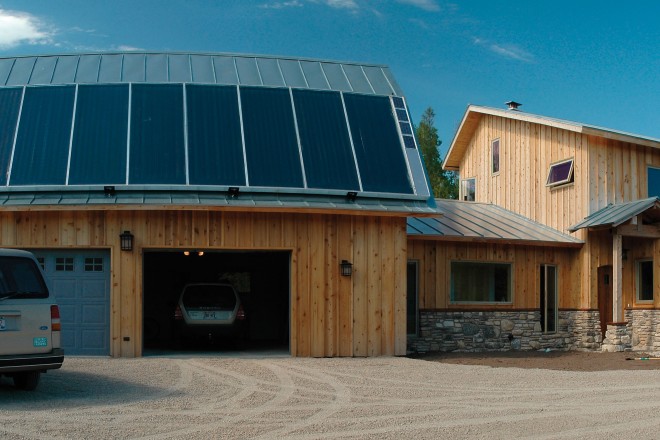 On a stretch of land just north of Baileys Harbor three ancient meadows converge. A satellite image of the land, with its dark patches of tamarack and spreading juniper, suggests a lunar landscape unblemished save for a winding stripe left long ago by some wayward adventurer. But the house that has settled into this primitive terrain is all about the sun.

In late November 2004 I received a call from John Wilson, a professional actor who moved to Door County by way of Alaska and Iowa to take over the family’s manufacturing business. His builder, Russ Cockburn, was ready to start constructing a new home for John, and they needed building plans.

John and I worked for several weeks to create a template from which he and Russ could work. The goal was to have a modestly-sized timber-frame structure which would be heated by the sun and would reflect John’s artistic sensibilities. The home was to be sited on the only highland meadow in the area, and John wanted to capture the multitude of views throughout the property while maintaining the pristine nature of the landscape. He even insisted on taking the unpopular stand of blocking off a long-used snowmobile path that ran through the property…what he considered the single scar on this slow-to-heal land.

The biggest challenges from a design standpoint were to provide solar orientation in a home whose primary rooms faced the north meadow, and to create space for John’s many interests – including cooking for large gatherings of friends – within a modest footprint. John wanted plenty of room for impromptu plays, readings, and musical events. He also wanted a private office, a large screen porch, wine cellar, walk-in pantry and oversized kitchen island. Plus, there needed to be a guest suite for visiting friends and family members. Wanting all of this, within a goal of just 2,100 square feet, was certainly asking a lot, and the house grew somewhat. John was willing, though, to be realistic about reducing unnecessary space. For instance, the two main bedrooms are small by today’s standards. “But,” he reasoned, “you don’t spend time in your bedroom unless you’re sick…so why waste the space?”

Upon completion the plans were given to Russ who made subtle modifications to the garage roof for the solar water heating panels. Then the two men proceeded forward on a one-year mission, adjusting and massaging the forms and spaces, exploring and analyzing the optimum heating systems, and selecting all the components necessary to make this unique structure as energy efficient as possible.

The central concern of the home – solar heating – was skillfully addressed by Bob Ramlow, a solar consultant, and George Zachariason of Solar Mining in Green Bay. An array of solar water panels adorns the full width of the garage roof, providing radiant heat to the home’s concrete floors. John said there’s so much hot water that he can take as many baths as he wants. And with its “Iron Curtain” filter, the water coming from the faucet is as clear as from a mountain stream.

To retain the heat in winter, and repel it in the summer, John chose to install triple-pane windows. The exterior walls of the house are superinsulated, using both blown-in and rigid insulation. The ceilings and attics are likewise insulated far above the usual levels.

The home is comprised of the main house and the garage/guest loft, connected with a corridor that houses laundry, guest bath and closets. The main part of the home has uninterrupted views from kitchen to dining to living room. A small private library is tucked just off the living room, and a garden room next to the kitchen will provide fresh herbs all winter long. From John’s office on the second floor balcony he can drink in distant views of the north and east meadows, while also connecting with the living room below. Two diminutive bedrooms nestle under the rafters, catching breezes that blow past handcrafted transoms, and out through clerestory windows on the north balcony wall.

Materials used throughout the home are as natural and ancient-looking as the site itself. With its sloped stone-covered foundation, the house seems to be pulling itself right out of the bedrock below. The natural cedar siding also looks to be drawn straight from the surrounding woods. A galvanized metal roof will, in time, attain the muted patina of the old barns down the road. Inside, concrete floors stained rich red ocher flow through the entire first floor. Articulating the walls and ceilings within are rustic wood beams and columns hewn from the timbers of a railroad trestle that once spanned the Great Salt Lake.

The bond between homeowner and builder is readily apparent; their respect and admiration for one another genuine. Russ had grown up in Arizona and learned the construction trade from his father, who was also a proponent of sustainable building practices. While living in the desert, Russ learned all about working with natural materials such as adobe and stone, and came to understand and appreciate the benefits of solar heating and cooling systems.

When a natural beauty named Linda vacationed in Arizona in 1995, she and Russ met, soon married, and he followed her back to her Door County home. Since then, he has quietly and diligently pursued his mission of building “the natural way.” In addition to solar homes, he has helped construct two, and soon to be three, straw bale homes in the area. Recently, he also took a course on solar home heating systems from the Midwest Renewable Energy Association, so that he could confidently help install the solar water heating system in John’s home.

Russ’s patient hands and skillful eye for detail are obvious in every corner of the home, from the rustic stonework gracing the two-story fireplace chimney, to the pegged wooden balcony railings that he designed to swing open so that large furnishings could more easily be lifted up to the second floor. In the center of the home Russ constructed a lovely wooden spiral staircase, artfully crafted and perfectly proportioned so that one truly glides up the stairs and down.

The gifts that John brought to the project were his vision and his appreciation. When asked why he chose to build a solar home, he replied, “It’s the 21st century. If we have an issue on this planet, it’s that we use too much stuff. I didn’t want to be so piggish.” His dream of building smaller than today’s typical home, of maintaining the natural beauty of the site, and reducing his energy consumption is certainly focused on the future, without sacrificing the joy of today.

His appreciation? John knew when to step back and allow his builder, well-seasoned in sustainable building practices, to guide him to sound decisions. “Russ wouldn’t let me do things,” John explained. “For instance, I wanted bigger windows…and he would let me have maybe an inch more. He was constantly making this an efficient system.”

A typical sustainable or “green” home is estimated to cost two to five percent more than a home of standard construction methods. A home such as John Wilson’s, with its masonry heater fireplace, its extra layers of insulation, and its solar heating system, is a much greater investment. John believes the payback for energy savings could be 15 years. He was willing to make this effort, though, not only for his own benefit, but as an example to others of what can be done.