The Century Farm honorary awards program began in 1948, the centennial of Wisconsin’s statehood. Now nearly 8,000 farms have been cited, 125 of them in Door County.

While many of the farms recognized are or once were dairy operations, the only requirement for a Century Farm citation is documentation that the land has been in one family for 100 years or more. 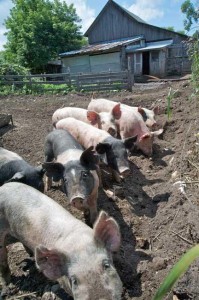 Jill Albanese, who has been the Century Farm Program Coordinator since 1997, explained that the purpose of the program is to “recognize those properties that have contributed to our state’s history” at an annual State Fair event.

The family farm has been an important institution in Wisconsin. The agrarian way of life, especially on a small self-sufficient dairy farm, is a part of the mythology that defines us as a people.

But even before 1948, 80-acre farms were beginning to disappear as tractors replaced horses, machinery became more sophisticated, and farmers were able to work larger tracts of land while milking more cows. Just as one-room schools fell victim to consolidation, so were small farms absorbed into bigger operations.

While we celebrate progress we are at the same time left with a feeling of nostalgia for what has been lost in the process. The Century Farm designation becomes not only an award for the longevity of a business enterprise, but also an endorsement for a way of life.

Each year new honorees are invited to a breakfast at the Fair sponsored by Hillshire Farms. At the ceremony a roll call introduces the new inductees and each is given a Century Farm sign. Speakers include the Secretary of Agriculture (or a representative), the State Fair Chairperson, Alice in Dairyland, and the Fairest of the Fair. At the conclusion of the event, photographs are taken of the families.

The earliest Century Farm in Door County dates from 1838, 10 years before the Wisconsin territory became a state. Raymond Weldon, Jr., still owns 40 acres of the property, which is located in Little Sturgeon Bay 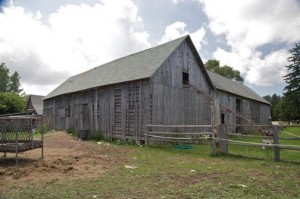 His great-great grandfather Stevenson married one of Increase Claflin’s daughters. While Weldon’s family has always maintained a few farm animals for their own use, they were primarily fisherman, and then later rented shore cottages to tourists.

Thirteen farms in the county date from the 1950s. Many of them have been designated Sesquicentennial Farms as well.

One of those farms is owned by George Delveaux, Jr, whose great-great grandfather Ferdinand Delveaux began farming in 1856. The land passed down through Constant, Ferdinand, George, and now to George, Jr., who said “I always wanted to be a farmer ever since I was a boy.” He began his career in dairy when he graduated from high school.

Delveaux’s roots are firmly established in the Brussels area. Two miles away is Gabriel Dekeyser’s 1857 Century Farm, one that descended from his mother’s side. As Delveaux’s adult children own a part of the farm on Brussels Road, it will remain in the family.

Twenty-eight year old Ryan Chaudoir is the seventh generation on his Brussels farm, milking 60 cows. He, too, can trace his family’s history on the farm, beginning with Alexander Evrard in 1857, down through Francis, Eli and Emma Evrard Chaudoir, Harry, David, David, Jr., to himself, nephew of David, Jr.

Of his farm’s designation as both a Century and Sesquicentennial Farm, Chaudoir expressed a sentiment held by all of the Century Farm honorees. “It’s important,” he said, “something that has been in the family for so many years. It’s fun to be a part of it, and I feel a sense of pride in taking over the family farm.”

Elton and Jeanette Spaid still live on their 1859 Nasawaupee Century Farm, but the land is cash-cropped by a renter. Frank and Katherine Spaid were the original owners of the dairy farm, followed by Emil, and then the present owner Elton.

In 1977 Door County high school students painted a mural on the Spaid barn as a part of a Wisconsin Arts Board project. Because the barn is highly visible on Highway 57, photographs of the artwork appeared in a number of national newspapers and magazines.

One Northern Door Century Farm has diversified. German immigrant Albert Schmidt was a veterinarian as well as a dairy farmer on his 1872 property that passed to his son John Smith (who Anglicized the spelling of his last name), to Walter, and now to siblings Tom, Richard, Brian, and Mary. The brothers run the farm and their sister Mary Olson runs the Century Farm Motel on the property.

Louis Sohns’ Century Farm on Maple Grove Road not far from Fish Creek also began as a dairy in 1900, that land passing from Grandpa Ferdinand to his son Walter, to Louis. The farm turned to beef cattle and once had cherry orchards. Louis and his adult children now tap maple trees to make syrup.

Across the road is a second Century Farm belonging to Sohns. The land was purchased by his great uncle William in 1979 and passed to Uncle Irving, Uncle Bob, and then to Louis who has passed a parcel to his daughter Evelyn.

Not far from the Sister Bay Historical Society’s Anderson House sits the Century Farm of Davis Sitte and his family. Frederick Will, who began farming the land in 1891, passed the land to Emil, then Ruth Will Sitte, to Davis who has passed a portion of the land to his adult children, Carol, Natalie, Robert, Sharon and Susan.

The original barn remains from Frederick’s farm, as well as the log house now concealed within the remodeled present structure. A portion of land that he once owned is presently the location for the Corner of the Past historical site which features the Anderson House.

Davis Sitte, who has lived in his home for 69 years, appreciates its family history. “Finding a place with that heritage is rare,” he said.

Old Stage Road east of Sister Bay is home to the 1892 Century Farm of Emil Johnson. His son Charles changed the family name to Nordeen because the number of Johnsons who lived in the area caused confusion with his mail service. The land passed to Raymond, and then to his niece Jean Nordeen Hill whose daughter Jody and her husband Jerry Littler live on the homestead.

Like many early farmers, Johnson began with a dairy herd; however, his son planted an orchard, including apricot trees still bearing fruit, which the Hills continue to maintain. The land has been divided among the three adult children in the family, Beth, Jody, and Randy, each determined to keep the land and original buildings in tact.

People driving by the farm will notice seasonal decorations on the historic barn, and during fall, an honor-system apple stand.

Door County has a rich agricultural heritage that is recognized by the state through the Wisconsin State Fair organization. This year a new group of Wisconsin inductees will be added to the Century Farm honor roll. Watch for the County’s additions in the Pulse after the names are available.

Readers who own property that has been in the family for 100 years or more may find Century Farm applications at many locations, including the County Register of Deeds Office and online at http://portage.uwex.edu/documents/2009SesqFarmApp.pdf.