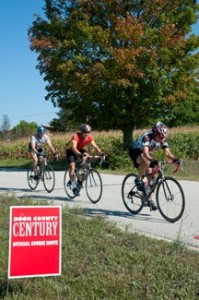 Over 2,300 cyclists will take to the streets of the peninsula for the Door County Century Ride on Sept. 9. Photo by Dan Eggert.

On September 9, over 2,300 bicyclists will explore the roads of Door County as part of the 34th annual Door County Century Ride. The ride is not a race, but a social affair where riders are encouraged to ride together and move at their own pace over distances from 28.5 to 100 miles.

That social atmosphere, however, also creates some safety concerns.

“Some riders get so caught up in riding in groups and chit-chatting that they lose their normal focus,” says Sean Ryan, Event Director for the Door County Century Ride. “They find themselves in a majority going down country roads…and feel that they own the road.”

Ryan became involved with the Century Ride in 2008, the same year the ride began issuing “Rules of the Road” handouts to each cyclist. The handouts caution riders against some of the more common safety hazards that race organizers witness, such as ignoring stop signs, excessive speeds, and riding in non-single file groups.

As Century Ride participation has grown from a couple hundred of riders to a couple thousand, safety efforts have also stepped up. The Door County Sheriff’s Department used to only put one officer out to patrol during the ride. Now, three officers will be out on patrol, and three officers will be stationed at specific locations along the route.

“Each year we’ve been increasing patrols and designating officers assigned to the Century Ride,” says Lt. Jeff Farley. “That’s their job for the day – is looking for violations.”

In addition to an officer stationed at the top of the hairpin turn on Cottage Row in Fish Creek, the hill will also be manned by a number of volunteers whose primary purpose is to slow riders before they start downhill.

“There’s no excuse for riders to go flying down it,” says Ryan.

Because the event isn’t a race, riders can take to the course anytime they want between 6:30 and 10 am. Ryan says the open-start format helps to mitigate traffic concerns.

“In an ideal scenario our crowd is spread out over a three to four hour window, so we don’t have to close roads down,” says Ryan. “This year, we’ll see riders start before 7 am because there’s a 3 pm Packers game.”

Despite some accidents and cyclists who feel the ride is a race, Lt. Farley feels the event has gone relatively smoothly over the years.

“If you just relax, take your time, and observe the safety laws it’s an enjoyable opportunity,” says Lt. Farley.

• Under Wisconsin law, bicycles are vehicles, and their operators have the same rights and responsibilities as motorists.

• Bicycles may legally be used on any road in Wisconsin except interstates, expressways and controlled access highways. The presence of a bike path, bike lane or sidewalk does not result in a forfeiture of that right.

• Bicyclists are supposed to ride as far to the right as practicable, which means safe and reasonable. There are many instances in which it is not safe or reasonable to ride on the far right. (Bicyclists are required to give parked cars at least three feet of space when passing them.)

• Allow three feet when passing any vehicle, including bicycles, and pass on the left. Change lanes to pass any bicycle traveling in a narrow lane.

• Look out the window to check for approaching traffic before opening your car door. “Dooring” – being hit by an opening car door – is a common cause of injury to bicyclists.

• Under Wisconsin law, bicycles are vehicles, and their operators have the same rights and responsibilities as motorists.

• Always ride in the same direction as other traffic, including on one-way streets, and do not weave in and out of traffic, parking lanes, or sidewalks – bike in a straight line.

• Ride as far to the right as practicable, which means safe and reasonable. You should be able to maneuver around debris or hazardous objects you come upon without having to swerve into traffic.

• When passing parked cars exercise due care, giving the cars three feet and avoiding the door zone. “Dooring” – being hit by an opening car door – is a common cause of injury to bicyclists.

• When passing moving vehicles, you must pass on the left and allow a safe distance between yourself and the other vehicle. Bicycles are allowed full use of a lane when it is too narrow to be shared.

• Bicyclists must signal their intention to turn for the 50 feet prior to making their turn, as long as signaling does not interfere with operating the bicycle.

Sources:  Wisconsin Department of Transportation and Bike Federation of Wisconsin