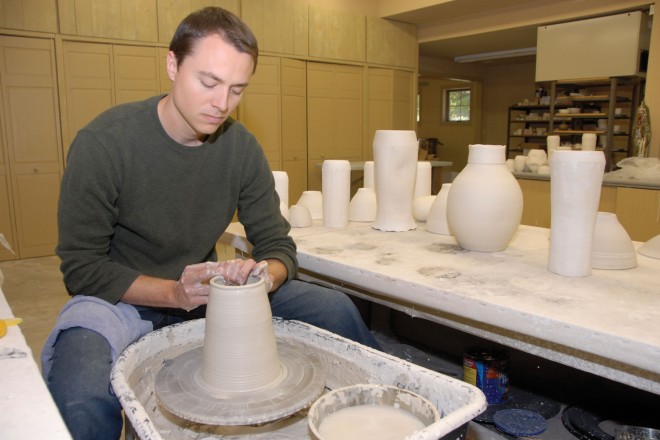 He was trained as an actor at Carnegie Mellon University. So it comes as a surprise to him, as much as anyone, that his life’s work is now forging ceramic art. When Chad Luberger, owner of Plum Bottom Pottery, talks about the transition from acting to pottery he finds an unexpected geometry of connections. “When you perform in theater you share yourself with your audience in an intimate way. There is nowhere to hide your work on a theatrical stage. It is all there for everyone to see. You are exposed in a deeply personal way.” Chad has discovered that pottery demands an analogous level of exposure. He says, “Every part of my history, my being, fuses with the work I do.” So when his gallery had its grand opening this past summer, he recognized an old feeling – a form of “stage jitters” just before the first guests arrived. He wondered if his work, the illumination of his innermost realities, would fare well under the gaze of strangers and friends. He felt as though the curtain was just about to rise on something he had literally poured himself into…and he was just a little nervous.

The story of his journey to this work is a varied and diverse tale. Chad attended grade school in Sturgeon Bay and high school in Peoria, Illinois. He spent summers in Door County with several generations of his extended family who had owned property here for years. After majoring in drama at Carnegie Mellon University in Pittsburgh, he moved to Los Angeles where he started his own film production company while acting in several television and movie productions. After a while he tired of the L.A. lifestyle and moved to Homer, Alaska, in his words “a polar opposite experience.” He lived on 600 acres in a small dwelling with a wood stove as the only source of heat and no running water. And it was here that he first encountered the world of pottery. On a whim he took a class in ceramics and in his words it “sparked a deep interest…introduced a connection that simply made sense.” Chad found the process satisfying. He was drawn to the tangible nature of the work, the functionality of it. Unlike acting he could touch and use what he created, and he could do it over and over on a daily basis. He was enthralled.

In the summer of 2005, Chad moved to Door County to be near his parents and grandparents. His plan was to work and save money and maybe go to law school. Then one day he stopped at the Potter’s Wheel with his grandparents. After a conversation with Ginka and Abe Cohn, legendary and beloved members of the pottery community in Door County, he offered to do odd jobs in exchange for time using the wheel in the studio. Ginka Cohn animatedly recalls that first meeting. She and Abe liked Chad immediately. They agreed he could help with the business and absorb what he could about their work. According to Ginka, “From the beginning it was a marvelous connection. Chad was a quick, eager learner and a joy to have in the studio.” Both Abe and Ginka are adamant in their refusal to take credit for Chad’s development as an artist. But Chad is equally adamant about the value of that experience in shaping his love of pottery. He watched Abe’s attention to the detail of every pot and his natural measured rhythm when he worked. And he learned from Ginka how to work with customers and run a business, which all three consider just as important as making pots. According to Chad the most valuable thing he learned was the spirit with which to approach all aspects of the work and the importance of integrity in that approach. In Chad’s mind he has never really left the Cohns, and their influence on him and his work continues to this day.

Chad was named an Emerging Artist by the Peninsula Art School in 2006, and in the spring of 2007 he was one of 18 students (out of thousands of applicants nationally) invited to study with Cynthia Bringle at the Penland School in North Carolina, a nationally known center for the study of the arts. Chad says he learned many technical aspects of the work at Penland and Cynthia Bringle reinforced what he had learned earlier about the measured rhythm of the art. Her philosophy is that when you do good work “it never gets easier or faster…there are no shortcuts.” She says you have to go with the demands of the work in front of you; it cannot be rushed. According to Cynthia, Chad has good imagination and considerable talent, and he is well on his way to becoming an exceptional potter.

Fundamentally, Chad imagines his work as collaboration with the elements of nature. He partners with essential aspects of the natural world. “I take earth and form it with my hands. Then I offer it to other components of nature – fire and air to create something that transcends each individual component.” In China he studied work that resonated with this perspective. For a month, in the fall of 2006, he lived in Jingdezhen, China, the birthplace of porcelain. He studied with a grand master of ceramic art. (China awards the distinction of grand master to only 27 ceramic artists in the country). Chad lived above the potter’s kiln and interacted daily with potters from all over the world. He saw pottery that was thousands of years old as well as the cutting-edge work of contemporary artisans. He said it was almost eerie how from even before he went to China his work had a quality that reflected the simplicity and connection to nature that is so characteristic of what he saw there. This experience validated his early artistic inclinations and opened an entire horizon of new possibilities.

Working at the Potter’s Wheel with the Cohns, at Penland with Cynthia Bringle, and with the community of potters in China, have been incomparably rich experiences. The most valuable legacy of all these experiences, however, according to Chad, has been an increased awareness of the value of living and working in an artistic community. An artist’s life is by nature isolating. Typically an artist works alone for long hours, infrequently encountering others with similar interests. However, by founding Plum Bottom Pottery, Chad hopes in the future to create a tranquil, stimulating space where several artists can work together. The setting is already ideal. The gallery is located in a bucolic setting among copious trees, ponds, flowers and wildlife. In addition to his kiln and studio buildings, Chad has other buildings that could spaciously accommodate the work of other artists. He will be open year round as he fosters this nascent community.

If Chad’s plan comes to fruition – a group of people working independently, yet drawing on each other’s artistry to create a body of work for a diverse audience – one might suggest he has not moved that far from his beginnings as an actor after all. It is a different kind of art on a slightly different stage, but a deeply personal and illuminating form of art all the same.