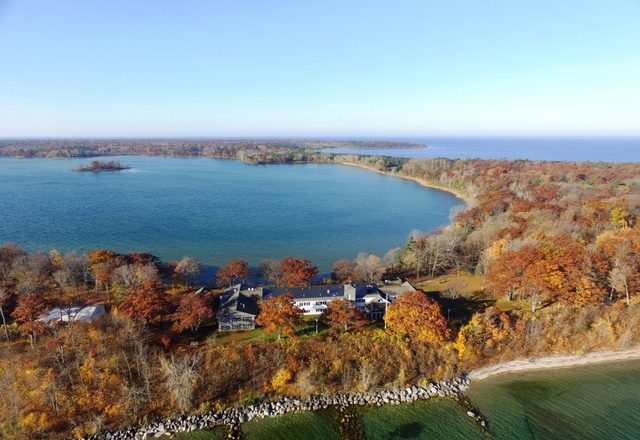 Fifteen families on Chambers Island are the new owners of the Diocese of Green Bay’s former Holy Name Retreat. They plan to remove most of the buildings on the property and sell off 10-acre plots in 2018.

Mary Jane Rittleman and her husband Ben Laird have been spearheading the effort to purchase the property “with the purpose of trying to stop more intense development going on out there,” she said.

“We put in an offer to the diocese which wasn’t even close to their original asking price, but we thought it was worth a try,” Rittleman said. “As the years went on, I guess the diocese got to a point where they didn’t want to worry about those buildings anymore and probably couldn’t open them up anymore because they were sitting there for so long. Eventually we got to a place where we were both happy with the price. We were in harmony with what their goals were for the island. Our goal is not to make or lose money but to keep the nature of the island.”

Rittleman also serves as co-director of the Chambers Island Nature Preserve Committee, a group that formed in 2012 to place 1,000 of the island’s almost 3,000 acres into a nature preserve.

“We’ve worked really hard at getting the nature preserve going and we’re about two-thirds of the way there with that,” she said. “When we were in the process, the retreat property went up for sale [in 2014] and we were all concerned,” she said. “Even though it probably wasn’t going to be nature preserve land, we didn’t want intense development going in there either to change the whole feeling on the island. Our goal as a group was to control the land and resell it in lot sizes that are similar to the rest of the island.”

Rittleman said the group will take this year to remove buildings that are in disrepair from the property, including the main retreat building and a small farmhouse, and then put up lots for sale in 2018.

“Eventually there will be some beautiful lots for sale,” she said.