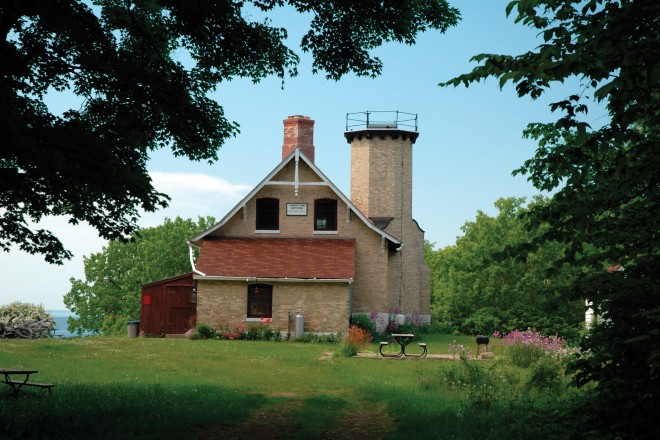 The original lighthouse is a historical landmark and museum. Photo by Dan Eggert.

On the horizon, most directly across the waters off of Fish Creek and Ephraim, lies an island that vacationers to Door County rarely visit. Chambers Island is situated approximately 7.5 miles northwest of Fish Creek, west of Horseshoe Island, and 11.5 miles northeast of Marinette. Chambers Island is about 3,200 acres and boasts a 350-acre inland lake name Mackaysee; within that lake are two smaller islands. In the short distance between the bustle of Fish Creek and the quiet of Chambers Island a dramatic change takes place as one heads out on the charter boat Quo Vadis. It is as if one steps back in time to a world of simple pleasures and away from the conveniences of day-to-day life to which we have become so accustomed.

Chambers Island has a rich history dating back to the early 1800s. It was so named for Colonel Talbot Chambers, a military man, who was sent to Green Bay with his crew to establish a military post. According to the History of Door County, Wisconsin: The County Beautiful by Hjalmer R. Holand, “In 1816 he and his men were the first to sail the waters of Green Bay since LaSalle lost his ship the Griffin there in 1689. On the voyage the men named Washington Island -the largest- to honor the father of our country, and Chambers Island for the commander of their expedition.”

The first permanent settler to the island was Stephen A. Hoag who was soon followed by Nathaniel Brooks. The latter declared the island “a perfect paradise” and a settlement arose there in the 1850s. The first settlers to the island were ship carpenters. The island, teeming with a rich resource of pine, oak, and hemlock, was an ideal place for the boatbuilding settlers. Most of the early inhabitants of the island made small clearings on their property where they farmed and fished for their subsistence. At the time, almost all lived on the north side of the island.

In 1857 a lumber mill was established and in the following eight years the island’s population exploded. Town meetings and elections were held, a schoolhouse erected, a post office established, and regular church services were held weekly. By the end of 1869 the island was attached to the town of Gibraltar on the mainland.

During the island’s boom, it was decided that a lighthouse would be erected to help guide mariners through the west channel from Lake Michigan to the port of Green Bay. In July of 1866 Congress appropriated funds, and in May of the following year 40 acres on the north end of the island were purchased from Lewis S. Williams (a sawmill owner) for construction of the lighthouse. Mr. Williams was the first keeper of the lighthouse; he also was the longest in duration. He ran the lighthouse for just over 20 years. In June of 1868, construction began when the steamer Rocket arrived with the construction materials and crew. Except for the octagonal construction of the top tower, the lighthouse is nearly an exact copy of the lighthouse at Eagle Bluff in Peninsula State Park. On October 1, 1868 the inaugural light shone across the waters every 30 seconds for the safety of the Great Lakes’ captains.

In future years, as Terry Pepper reveals in the book Seeing the Light: Chambers Island Light, the lighthouse would be updated to accommodate changing maritime needs. “The lighthouse was automated in 1961, and at that time the Coast Guard erected a steel tower measuring 97 feet and placed a battery powered beacon atop the structure; solar panels are now used for power.”

Today the original lighthouse is an historical landmark and museum on the island. The current keepers of the lighthouse are Mary Ann and Joel Blahnik, who also happens to be the captain of the charter that takes residents and visitors to and from the island on a regular basis.

During the early 1900s, after the boom subsided, Chambers Island became a picnic destination for many visitors who would spend the day relaxing and picking wild berries. Later, in the 1950s, many families would go to Chambers Island during the summer for fishing and camping weekends. Two families in particular, the Trainers and the Brumders, built a camp in Homer Bay and would visit there regularly. As current island resident Robert Brumder reflects, they would “go to the island to get away from it all and have quiet and fun family time. A typical day on the island would be spent improving or maintaining your property, fishing, bike riding, or just enjoying the serenity of the island and its lovely beaches and wilderness. At night, we would gather and play cards or just sit out under the stars enjoying the quiet beauty of the island.”

Life on the island has changed very little from its beginnings. Residents of the island still bring provisions with them when they arrive on a Friday at the harbor. There are no general stores on the island and running water and sewer systems are a convenience of only the past 20 or so years. Most homes on the island use gas-run refrigerators and kerosene lamps. There are still no phone lines to the island and, shockingly, no electric lines either. Once you are on the island you are on your own for many basic needs. But now, like in the past, the island community is close and helpful in times of trouble or need.

Because of the somewhat primitive island lifestyle and Chambers’ location in the middle of Green Bay, the inhabitants learn early to respect nature and the weather. When a storm arrives, residents really “batten down the hatches” and stay inside until it has passed. If it is a particularly brutal storm, neighbors often check on fellow islanders to make sure that everyone has come through the storm unscathed.

The island has two main roads, which are well maintained by the township of Gibraltar. Most islanders own or have access to a boat, but many still rely on private charters and barges to get the provisions and vehicles needed for living and making improvements to their property across the bay. There is a public boat launch at the East Dock on the island. Access to the island can also be gained by use of the grass airstrip. If someone wanted to build a home on the island they would have to hire a barge to get the necessary equipment, supplies, and crew out there. This is no easy task, and it is also extremely time consuming.

Today, families come back year after year, generation after generation to the cabins built by their families. The community on Chambers Island is of a special ilk who knows how to and really enjoys getting away from it all. Some even go so far as to turn off their cell phones and be incommunicado for the duration of their time on the island.

Chambers Island is a jewel in the Door community. Today, as in the past, it is quiet, isolated and beautiful. Full of historical, geological, and botanical interest, there is something to be found for every visitor to the island. Just remember to prepare well and pack appropriate provisions because one isn’t just taking a charter across the bay. One is taking a journey into the past to a simpler time where immediacy and technology don’t dominate and the island charm continues to beckon both inhabitants and visitors alike.