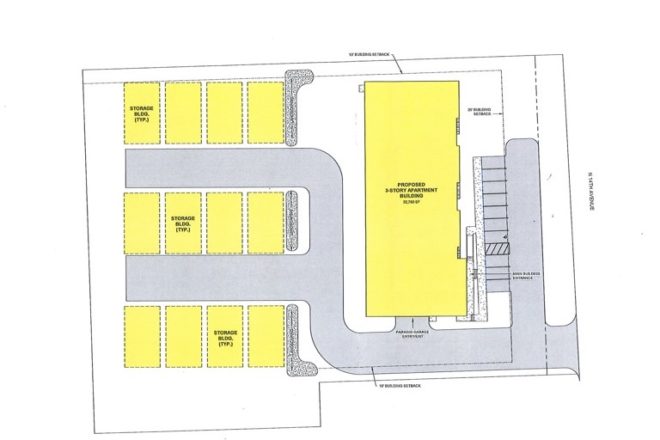 The plan calls for changing the designation of about 40 acres of land from Agricultural/Rural to Regional Commercial across from the Salty Seagull miniature golf course along Highway 42/57. The plan commission’s recommendation, which came Sept. 21 after a public hearing, will now go to the Common Council Oct. 4 for a first reading.

Fleet Farm is interested in purchasing three lots owned by Mark and Cindy Kerscher in the Town of Nasewaupee that the company wants to annex to the city.

“The comprehensive plan that we’ve adopted lists the site as agricultural/rural-type uses, which doesn’t fit what [Fleet Farm is] trying to do here,” he said.

From a planning standpoint, Sullivan-Robinson said the site would fit under the Regional Commercial designation because of its access to the highway corridor and abutting other commercial uses, as well as being served by municipal sewer and water.

Before Fleet Farm could build on the site, the city would need to annex the land and grant a conditional-use permit to the company for a large retail facility.

Community development director Marty Olejniczak said there are currently no more areas in the city designated as Regional Commercial that could be developed.

“If you decide you don’t want any more commercial development, that’s one thing you can do,” he said. “But if you do, the question is where. And as Chris [Sullivan-Robinson] pointed out, there are several reasons why this particular property makes the most sense.”

Property owner Mark Kerscher, who asked the city to approve changing the property’s designation, was the only one who spoke during the public hearing.

The commission agreed to hold a public hearing next month after hearing Sept. 21 from Dave Phillips of Bayland Buildings, who is representing Steve and Jason Estes of Estes Investments. That firm wants to construct a three-story, 22-unit apartment building, along with 12 storage buildings, at 1261 N. 14th Ave.

Estes Investments is requesting rezoning from Agricultural (A) to Multifamily Residential (R-4). The west partition of the lot was previously rezoned General Commercial (C-1) to develop the commercial storage buildings. The property owner planned back then to develop a multifamily residential property on the eastern portion – consistent with the comprehensive plan – if municipal sewer and water became available. The city now has plans to provide those utilities to the site.

“We’ve now come up with a design that we feel is correct,” he said. “We hated to give up those three storage buildings, but to get the apartments to work, to move forward, this is what we’ve settled on at this point.”

The building will have 18 one-bedroom units and four two-bedroom units. An elevator will provide access from the underground parking to the upstairs areas.

“We’re finding out that a lot of apartments that are going up in the city, in many cases, are a lot of two-bedrooms,” he said. “This will be more of the one-bedroom [type], and still, with the elevator, they can maybe – older people my age – could utilize it, and maybe as winter [arrives], they could get the heck out of here.”

Phillips said the apartment will probably not be limited to those aged 55 and older, though it could fill up with people in that demographic versus families.

“I think you hit the nail on the head with this as far as I’m concerned,” he said.

The commission also did a conceptual review of a proposed planned unit development (PUD) calling for 19 duplexes with 38 units to be built on an 11-acre site along the north side of Colorado Street.

Olejniczak said the city’s zoning code requires a PUD for development with multiple two-family dwellings on the same lot.

Marc Isaksen, who appeared before the commission as the agent on behalf of E&I Investments, said the duplexes would have some variations.

“There’ll be some change, probably, in some roof lines, things like that,” he said. “We’ll have some amenities. We’ll have a small clubhouse.”

Isaksen said the site would have extra garage space and be developed as a 55-and-older community.

Isaksen said the units would be sold off like condominiums, with each side of a duplex being sold, and the site would have an association and dues.

Olejniczak said the property “has been wanting to see something happen on it for a long time. I’m pleased to see that this group has found a pretty cool idea that is something that I think should be able to work in Sturgeon Bay.”

Olejniczak said the conceptual review was the first step in reviewing the PUD, with the commission agreeing to allow E&I Investments to combine the subsequent preliminary and final reviews before it.