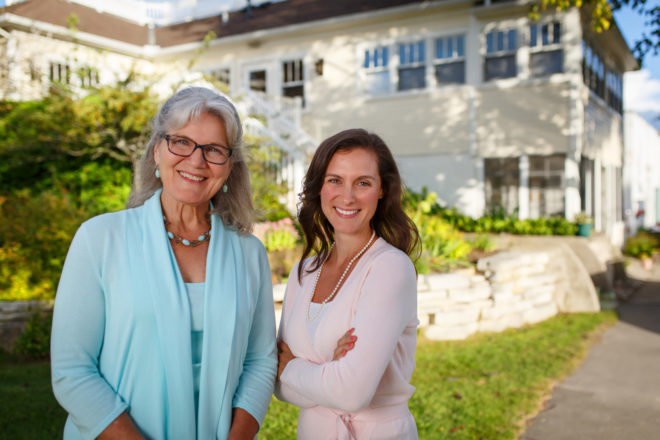 To begin:  Dr. Melissa Nelson, longtime Sturgeon Bay chiropractor, is not retiring. No matter what you’ve heard – even on the radio – she will continue to be in her office at 44 S. 2nd Ave., just as she has been for many years.

Now for the backstory. When she was a little girl, Melissa’s dad used to pay her a quarter for a back massage. “I realized when I was very young,” she said, “that I could help someone with my hands. I loved doing it. My dad was a health nut, ahead of his time with his interest in vitamins and good nutrition. I guess it was a natural thing for me to continue with his ideas.”

Not only Melissa, but her three sisters also chose careers in the healing arts. Erika is working on her master’s in counseling, Antonia is a massage therapist, and Lisa Iverson, the youngest sister, owns Chrysalis Healing Center, where she practices massage therapy, reflexology and energy healing.

Although Melissa was born in Green Bay, her love for Door County began early at her grandparents’ cottage in Egg Harbor. Later, her family moved to Fish Creek, and after college, she worked at the Sister Bay Bowl. She spent several years working and going to school in Colorado before following her heart (and hands) to Logan College of Chiropractic in suburban St. Louis, Mo.

Like her father, Melissa has always been ahead of the times. When she was a student at Logan, only about 10 percent of the students were female. Currently, it’s 49.9 percent. And, although now many health care professionals talk with their patients about diet and nutrition, Melissa was a pioneer in the field of holistic medicine.

When she returned to Door County after graduating from Logan, she rented space in the office of Dr. Gerald Berg. But Melissa’s practice grew so fast, so quickly that she had to ask Dr. Deb Webber to help for a while. Two years later, Melissa bought the entire building next door at 18th and Michigan. She practiced there for more than 20 years. During that time, Dr. Luke Staudenmaier joined her as a partner.

When, at age 50, Melissa developed a problem with her vocal cords, she sold the practice to Staudenmaier and took a two-year sabbatical. When she returned to work in 2006, she purchased her present location at 44 S. 2nd Ave. Along with chiropractic, she continues to specialize in teaching diet, nutrition and meditation.

“I love so much that the body is designed to heal itself, using its innate intelligence,” said Melissa. “As chiropractors, we clear away the interferences to inner communication and allow healing to happen. Coupling this with dietetic, nutritional and emotional support, we see on a daily basis the miracle of people winning their lives back.”

Melissa mentions particularly two former patients who took her beliefs and treatments to heart and carried them into their own careers:  Kathy Navis, who owns Greens N Grains in Egg Harbor and Junction Center Yoga Studio in Jacksonport; and Cindy Knigge, who works at Healthy Way Market in Sturgeon Bay, a company that stresses healing the body through food.

When Melissa turned 60, she began thinking about changing the way she operated – specifically, dropping the business side of her practice. “Retirement never sat well with me,” she said. “How do you stop doing what you love? Everyone needs to have a purpose. To make a contribution.” She pondered this for about two years before letting it be known that she was considering a change. Sometime during this period, a young chiropractor in Green Bay called to see if they could meet for coffee.

Dr. Kathleen Arnold grew up in Menominee, earned her undergraduate degree in nutrition from Eastern Michigan University and met her husband, Levi, at Palmer College of Chiropractic in Davenport, Iowa. After graduation and marriage in 2011, they settled in Sturgeon Bay. Levi joined his dad’s practice and Kathleen commuted to work in a Green Bay chiropractic office for several years, while giving birth to Trigg, 5, Lotte, 3, and Macky, 18 months.

“While I was pregnant with Macky,” she said, “I knew I needed to be working closer to home.” That’s when she called Melissa. From June to September 2016, Kathleen worked part-time in Melissa’s office, while continuing to see patients in Green Bay. It was a fortuitous arrangement that allowed Melissa to take a long-hoped for trip to Italy. Last September, Kathleen rented space in the Sturgeon Bay office, and in May 2017, she bought the practice. It involves a bigger change for Kathleen than for Melissa. Along with seeing patients, Kathleen will now handle all the details of running a business. Melissa will continue doing what she loves – helping patients become healthy.

“I think of it as a shared office,” Kathleen said. “I’m consistently learning from her, and it’s really great to have her mentorship. The opportunity to work with someone who’s been in practice for a long while is an invaluable asset, especially when stepping into business ownership. At 32, I still have a lot to learn, and it’s great to have someone to bounce ideas off of.”

She added that she and Levi love putting down roots in Door County, volunteering at their church and other local organizations and knowing that they’ll raise their children in this special place.

“It’s a gift to me to be able to continue to practice and mentor, to have a purpose,” said Melissa. “I love working with people, contributing to their lifestyle and well being. I feel very blessed to be able to go on as I have been, but I will appreciate taking some time off in the winter. I like Door County in the winter – the way people sort of ‘go inside themselves,’ relax and celebrate with friends as it’s not possible to do during the busy season.”

This winter, though, she will trade her magnificent Victorian home that once belonged to Gerhard Miller for a month in a casita (little house) in Santa Fe, where she can ski, bike and hike.

Both women say the relationship they have is rare and special – a handshake deal that bridged the depth of integrity and trust. “I put out my intentions,” Melissa said, “and God took care of the details.”

The public is invited to hear all about the transition plan at a celebration party with refreshments and entertainment from 6:30 to 8 pm Thursday, Sept. 21. The office address is the same, 44 S. 2nd Ave., but with new ownership, the name will change to Door County Healing Center.