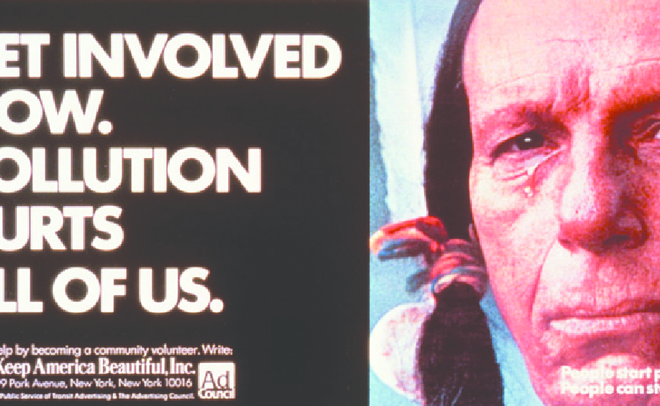 In season two of the television series Mad Men, set in the 1950s, ad exec Don Draper takes his family to a park for a picnic. The scene in the episode “The Gold Violin” includes all the staple images of the era for the upper-middle-class family: a shiny, new car; a homemaker mother; a wicker picnic basket. The family eats; Draper drinks his beer; and when they’re finished, he tosses his can on the grass; his wife, Betty, shakes the blanket to dump the trash on the grass; and they leave.

Yes, all the staples of the perfect 1950s life.

It’s hard to believe now, but just as we Americans need to be bludgeoned with reminders to simply wash our hands, it wasn’t that long ago that we needed decades-long ad campaigns to persuade us not to toss our trash in parks, along sidewalks or out of car windows.

Gaylord Nelson’s creation of Earth Day helped to change that, as did a wave of environmental legislation during the 1970s, but well into the 1990s, millions of Americans still refused to believe the simple idea that litter is bad.

As early as the 1950s, states such as Vermont began to crack down on single-use packaging – a move that scared some large corporations so much that they banded together to create the nonprofit Keep America Beautiful. The group launched a barrage of anti-pollution campaigns focused on individual actions rather than business, shifting the focus to litter rather than the waste and pollution associated with the production of disposable goods.

The term “litterbug” became a ubiquitous tag for those who mindlessly tossed trash. Some trace the origins of the term to Paul B. Gioni, a copywriter for the Ad Council, who is said to have coined it in 1947. He later created the tagline “Every litter bit hurts,” which appeared in campaigns beginning in 1963.

Though the campaigns provided cover for industry, they did help to drastically reduce litter and change attitudes toward waste disposal.

This public-service announcement has been called one of the greatest ads of all time. It featured a Native American man (the actor, Iron Eyes Cody, was actually Italian) paddling a canoe down a river filled with trash. As he pulls to shore, a bag of garbage is tossed from a car, landing at his feet. Then the camera pans to his face to reveal a tear rolling down his cheek as the narrator says, “People start pollution. People can stop it.” That tagline was also used widely in print ads.

Tellingly, the ad featured the Native American paddling past industrial sites, piles of coal, smog and smokestacks, but it said nothing about what business could do about pollution – only what litterbugs could do.

Give a Hoot – Don’t Pollute

If you watched Saturday-morning cartoons, you almost certainly spent some time with Woodsy Owl and his public-service announcements from the U.S. Forest Service. Woodsy admonished “dirty birds” and urged people to “Give a hoot – don’t pollute” from the 1960s through the 1980s.