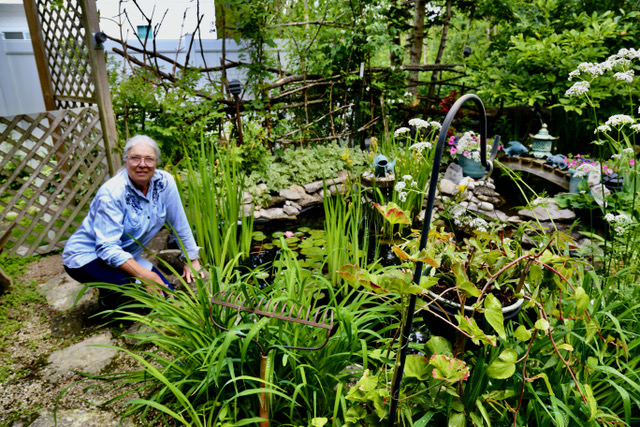 Brigitte Kozma in her garden. Photo by Tom Groenfeldt.

When you step out the back door of the Mill Road Gallery in Sister Bay, you can see Brigitte Kozma’s love for Claude Monet’s garden at Giverny in France reflected in her surroundings. In the width of the gallery and her home, she has densely planted flowers and trees, added three gurgling water features, and erected a small replica of Monet’s Japanese-style bridge.

She first visited Monet’s garden in 1995 while on a faculty-exchange program through the University of Wisconsin-Milwaukee that provided her and her husband, Tom Seagard, with a month in Paris, plus a few days at Giverny.

Kozma found the gardens there to be enchanting – when she could see the water and plants through the crowds.

She returned for another month in 2019, but that time with artist credentials that allowed her to enter the gardens with the gardeners around 6 am – before the public was admitted. She was also allowed to return after the gardens closed for a few more hours, and she used the time to take more than 4,000 photos.

“It took me three weeks to catalog them,” Kozma said, “and now I am painting them.”

The centerpiece is a six-foot canvas – now in the planning stages – that depicts the bridge in the early morning.

“I caught it in the [morning] in the fog,” she said. “Oh, it was coming up from the surface of the water, and I’m a water fiend. I love the character of water and what it does. My painting will be not so much because of the bridge but because of the way the light hit the wisteria, and the sun from the back filtering through the fog.”

To say that Kozma paints light sounds like stating the obvious because all painters work with light – it is, after all, what makes colors – but Seagard, also a painter, said her work after Giverny is different.

“Brigitte is going into an area that I’ve not seen before, and it’s extremely light sensitive,” he said. “She puts varnish into her paint to help facilitate the blending, and that makes the paintings very, very light sensitive. So when you look at them at 8 o’clock in the morning and 8 o’clock at night, it’s completely different.”

This is a technique Kozma is familiar with from her time as an art student researching how Danish painters used varnish in their paint.

“You get the crystals and you have to heat them up, liquify them and add turps,” she said. “It brings a certain consistency to oil, and I only paint with oil.”

Kozma is entranced not only by light, but also by water.

“If it doesn’t have water, I’m not that curious,” she said. “So that’s the main point of my work. I’ve got to have some water to look at because water is its own multiple. It reflects. You can look down in it. It tells you what kind of day it is.”

In this, Kozma is well aligned with Monet, judging by how Angelica Daneo, a curator at the Denver Art Museum, described the French impressionist’s interests:

“[Monet’s] art centered on nature, and his views often incorporated water, an element that is dominant throughout his career,” she wrote in Claude Monet: The Truth of Nature, a book-length study the museum published for a vast show it hosted in 2019-20.

“He’s my god,” Kozma added. “He put everything in there [Giverny] that he wanted. What a wonderful way to spend a life.”

With her own garden, Kozma seeks neither to repeat nor to achieve the same level of work that Monet did; instead, she is trying to create for herself the combination of tranquility and visual catalysts that inspired Monet.

“[My goal] was to surround myself with the same atmosphere that he must have been living in when he was creating,” Kozma said, “because from what I read, he was inspired by just sitting and looking at his garden. I understand fully what turned on his soul.”

Kozma and Seagard opened the Mill Road Gallery in 1971, and are celebrating their 50th year displaying art in the gallery. The gallery is located at 2328 Mill Rd, Sister Bay.