Modernism brought us New and Improved, Bigger and Better. But family and history and tradition are best left unchanged. Charlie’s Smokehouse has been in business for more than 70 years, smoking fish the same way Roy Voight did in 1932.

Roy’s son Charlie has spent his life with the smokehouse because of family and history and tradition, and Charlie’s son Chris has joined the business for the same reasons. 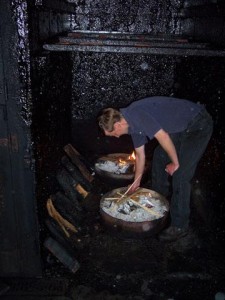 Gottlieb Voight, the patriarch of the family, was born in New York of German parents. He relocated to Gills Rock in the 1880s and raised five sons, three who remained in the area. Stanley and his family became commercial fishermen; Harry dealt in real estate (his restaurateur sons operated Voight’s Supper Club and the Sandpiper); and Leroy (Roy), Charlie’s father, built the original dock in Gills Rock for loading firewood on lake schooners and for fishing.

Roy began smoking chubs in a small outdoor smokehouse next to his dock. He and his wife Caroline sold them to summer visitors using a cigar box as a cash register.

“It was difficult maintaining a temperature in that smokehouse with the wind,” Charlie Voight said, “and he had to carry water down to the dock.”

“It was miserable!” Chris Voight laughed. 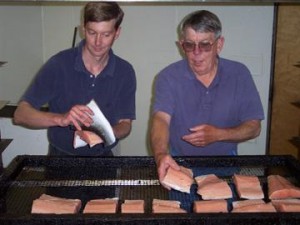 Charlie Voight (right) and his son Chris place fish fillets on a screen to be placed in the smokehouse.

Charlie grew up smoking fish, and when his father passed away in 1974 he took over the business, which until that point had no official name. People had always talked about Roy’s smokehouse as a place to buy smoked fish, and then it became Charlie’s smokehouse. In 1984, Charlie’s Smokehouse became the formal name of the enterprise, the year the business began remaining open weekends throughout the year and began shipping smoked fish.

Then in 1988 Charlie moved his smokehouse off the dock to the top of the hill in Gills Rock, and just as he had grown up smoking fish, so did his son Chris. A display of old family photos in the retail shop includes one of young Chris helping to rack fish for smoking. Because he was short, he had to stand on a wooden box.

After Chris graduated from UW-Oshkosh in 1995 with a degree in marketing and entrepreneurship, he joined the business fulltime. “I always knew I was coming back here,” he said. “The degree was useful for the business, and something I could always fall back on.”

Now his wife Jill works in the retail store two days a week while Chris’ mother Bonnie babysits for their two young boys; the other five days Bonnie runs the shop, which ships to all 50 states. (A mounted map in the store keeps track of Internet sales with pushpins.)

Charlie and Chris smoke fish using a traditional process that is classic in its simplicity, but at the same time relies upon an intuitive understanding of the technique. No artificial smoke flavor is added, only salt.

Roy began the business smoking chubs, but that fish species has all but disappeared from Lake Michigan, the victim of invasive species interfering with the food chain. “The chubs became less chubby,” Chris said, as they were wasting away for want of food because the diporeia (a tiny freshwater shrimp) were eaten by zebra mussels.

Each year they smoke about 30,000 pounds of commercial fish and 5,000 of custom sports fish. The process is the same.

Fish fillets are soaked in a brine solution for 12 hours, rinsed in fresh water, and placed on smoking screens. These screens are then placed on racks in the smokehouse over low fires of maple wood the Voights cut in fall and spring. With the door slightly ajar, the fire slowly heats the fish for about four hours. Then more wood is added, the door closed tightly, and for about two hours the fish is smoked over a smoldering fire. The finished product is cooled and stored in bulk pans.

While the Door Peninsula has seen many changes during the past decades, “Gills Rock,” Charlie said, “has remained more the same than other parts of the county. We haven’t had the development. It’s always been more residential.”

And the number of smokehouses has also decreased. Once four were operating in Gills Rock alone, Chris said. Now he believes that the Hickey Brothers in Baileys Harbor might be the only other one in Northern Door. “I think a lot of this has to do with the chubs,” he said. “When people ask for smoked fish, often they mean chubs.” He also believes that the regulations and required record keeping may have discouraged some of the other operations.

For a time during the 1970s and ‘80s Charlie operated his own fishing tug, the Susie. He still runs the Island Clipper passenger ferry to Washington Island, and used to sail concert cruises. “I decided to cut back from 16 hours a day,” he joked, “to 11 or 12.”

But he continues to offer the Light House Cruise every year as a fundraiser for the Door County Maritime Museum, the most recent outing raising $10,000. And the Clipper is occasionally rented for weddings, receptions, bachelor parties, birthdays, graduations, reunions, and team building events.

In addition to smoking fish, Chris fillets whitefish for people and chunks it for fish boils.

Both father and son agree that making a living near and on the water is a great way of life.

“You do what you do!” Charlie said. “But it’s a pleasure making people happy with the product. We get compliments all the time. And with the boating, what’s not to like! It’s great to be on the water with people. Being in business for yourself is good.”

“I’m in a job where my kids can visit me any time,” Chris said. “It’s a family deal. You put in long hours.”

“But you have a feeling of accomplishment with the family,” Charlie added. “Bonnie and I have been married 40 years and in this business together.”

“This is a small town,” Chris said, “a good place to raise kids. Working with family is good.”

Visit Charlie’s Smokehouse at the top of the hill in Gills Rock or at http://www.charliessmokehouse.com.