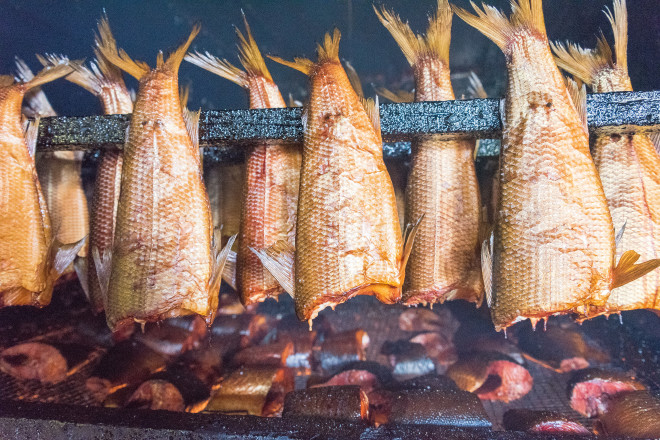 Rows of fish being smoked hang in the smoke house. Photo by Len Villano.

Chris Voight’s workday begins at six o’clock in the morning. He pulls three to four hundred pounds of whitefish, salmon and trout out of cold briny water, and prepares them for smoking; it is the same one his grandfather used when he started the family business, Charlie’s Smokehouse, in 1932.

Chris began working in the smokehouse as a kid, helping out his father Charlie, and has been working full time at the family business since 1995 when he graduated from college. 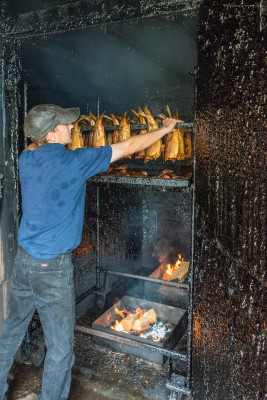 Chris removing racks of smoked salmon from the smokehouse. Photo by Len Villano.

Whitefish are sourced from local trap-net fishermen Charlie Henriksen, and lake trout and salmon, which are for sport fishing only in Lake Michigan, are imported from Canada and the Atlantic and Pacific oceans.

A four-foot stack of white plastic buckets sits next to the smokehouse door.

In addition to constant attention, smoking the fish requires a lot of prep work.

Prior to being smoked, the fish are cleaned, cut into pieces, and soaked for 12 hours in cold saltwater. Salmon, which are much larger in size than the whitefish and trout, are cut into smaller sections.

In one smokehouse, three stacked wire shelves are full of sport salmon. In the next, Chris hangs the whitefish on a tall wire rack, with wheels. The fish sit in neat rows, skewered through their tails, with their body and what would be their heads, dangling towards the smokehouse floor, where two square fireboxes sit.

“If you leave the skin all the way around the fish, it helps to seal in the moisture.”

Once the fish have soaked overnight and are on their shelves, the smoking process begins.

“The first four hours, we heat the fish out slowly and dry excess brine water out of them,” Chris said. “We call it drying.”

During the drying period, the smokehouse works like a convection oven. The open fires are low, and the doors are kept open to circulate air. Once the fish are sufficiently dry, Chris builds up the fires into pyramids and closes up the smokehouses. 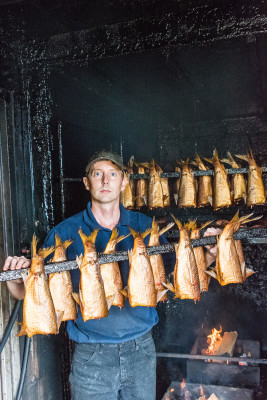 Chris removing racks of smoked salmon from the smokehouse at Charlie’s Smokehouse in Gills Rock. Photo by Len Villano.

Cedar kindling is used to start maple logs in the fire pans, which give the fish a distinct flavor. Chris doesn’t keep track of the volume of wood he goes through.

“Many, many cords,” he estimates. He has only had to buy the maple a few times – usually it is collected from his family’s wooded property. “We don’t like to cut live trees,” he said.

After the fires are built up, Chris checks on them frequently.

“You can never be too far away from them,” he said, “you always have to be watching the temperature.”

If a fire gets too hot, he opens the door and sprays it down with a garden hose, hanging nearby.

The fish are done smoking once they meet the correct internal temperature, and pass Chris’ fastidious color inspection.

“They have to be at 145 degrees for a half hour,” Chris said. “That, combined with the amount of salt in them, gives them a refrigerated shelf life of three weeks.”

“We have probes we stick in them, but I can judge it by color. I’m rather picky about the color – I like a nice golden brown smoked fish.”