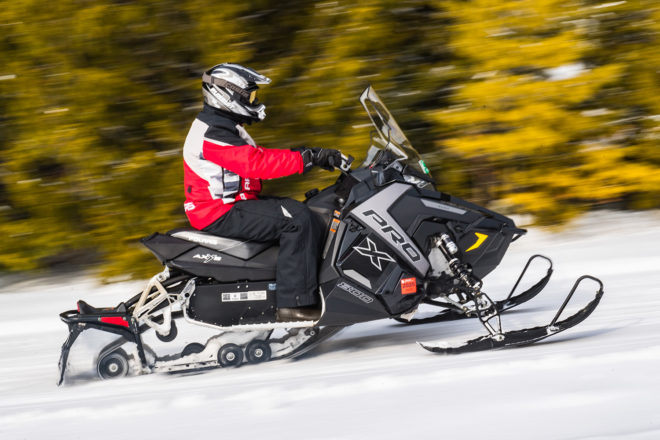 Door County has more than 250 miles of club and state snowmobile trails. Photo by Len Villano.

Door County summers are best known for big crowds and long days on the water or in the woods, but there are a hearty — and hardy — few who work hard during the summer to live well during the winter. Perhaps no group chases this lifestyle more than snowmobilers.

The dedicated members of seven snowmobile clubs around the peninsula manage and maintain more than 250 miles of trails for locals and visitors to enjoy, and their work begins well before the first snowflake falls.

Steve Sohns is president of the Villagers Snowmobile Club and the Door County Trails Association. He said the work — clearing brush, mowing and smoothing trails, putting up scores of wayfinding signage — begins in the fall. Much of that work, along with the century-long history of the sport, has contributed to a trail system that Door County visitors enjoy year-round.

“Most of the trails that are in most of these places were formed by the snowmobile clubs,” Sohns said, citing trails on land within state parks and Nature Conservancy properties. “Visitors are walking on the nature trails in the summertime, and we use the trails, if we’re lucky, maybe 45 days a winter.”

The Wisconsin Department of Natural Resources has a program to fund clubs for their work maintaining the trail system. Door County clubs have received about $70,000 during each of the past few years, but Sohns said that amount is not enough to cover the true cost of maintenance.

“What they get reimbursed for isn’t all their hours,” said Denise Denil at the Door County Facilities and Parks Department, which helps to administer the state funds and trail system. “They work a lot more than they get paid for.”

Denil said the trail miles that travel through private land account for a big part of the time spent preparing the network.

“At the beginning of the season, they have to go out and get permission to lay that trail through private land, and it’s quite a bit of volunteer work,” Denil said.

Meanwhile, not all years are lucky. The dependence on cooperative weather and the uncertainty of the sport can be frustrating: Club volunteers put in hundreds of hours of work during the summer and fall to prepare for the winter season, not knowing whether their time will be spent for naught. But they don’t have much of a choice.

“We keep plugging away because the alternative — if we decide one year to listen to [the] Farmers’ Almanac, and there isn’t going to be any snow — then we would lose our state funding,” Sohns said. “When and if the day comes that a club decides to hang it up, that would be a domino effect because if one club quits, then the trails can’t connect, and there really isn’t enough help in the clubs.”

That lack of help, caused by declining club membership, makes the challenge of maintaining the system even harder.

“There’s been a decline in membership of young people, but they’re out there riding,” Sohns said. “There’s a lot of young people enjoying the trails, but we don’t get a whole lot of help [from] them. Back in the day when the parents were in the club, the kids would help. But we really don’t have the new parent members joining with their kids, and that [volunteering] routine isn’t continuing.”

Denil said that without the clubs, there would be no snowmobile trails.

All that work by the dedicated few has helped to add to Door County’s winter economy and appeal.

“Winter tourism plays an important role in the economic sustainability of businesses that choose to stay open during the winter months,” said Jon Jarosh, director of communications and public relations at the Door County Visitor Bureau. “While it may have the most room for growth of all four seasons, it’s a beautiful time to visit Door County, and we see more businesses trying to open their doors.”

“When we have good snow on some weekends and you look around, you can see the restaurants and the bars are busy because people are driving around and stopping at places and spending money,” he said.

The dozens of miles of trails through private properties also provide a way for snowmobilers to see parts of the county that aren’t accessible to just anyone. The trail between Baileys Harbor and Sister Bay, for instance — complete with a popular spur to the AC Tap — traverses parts of the Mud Lake State Wildlife Area, which is boggy and impassable during any other time of the year.

Some people bristle at the sound of snowmobile engines blazing through the otherwise soundless, snowy landscape, but even fewer know of the hours of unpaid time the local snowmobilers put into maintaining a fair-weather trail system and providing a wintertime family activity for residents and visitors alike.

“Many of the trails were made by snowmobilers back in the day, and now a good share of the trails aren’t even snowmobile trails,” Sohns said. “We know how to take care of trails, and we don’t mind sharing.”

By this point in the year, club members have already been working for months to prepare the trail network for the winter season. Now they sit back and wait for a snowfall so thick that they have to dig themselves out of their homes and straight to the garage, where their snow steed awaits.