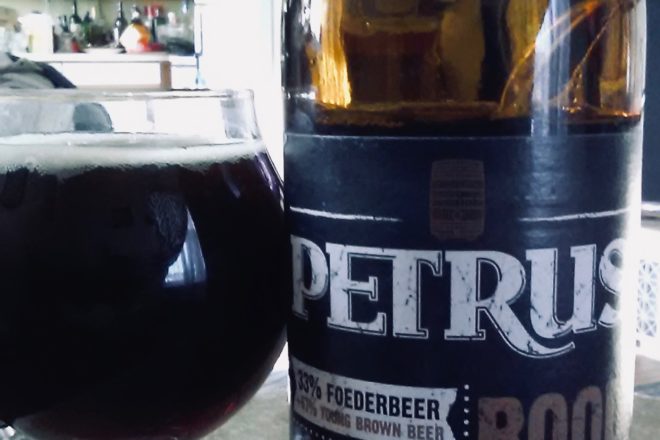 I was happy to see a bottle of Petrus on the shelf recently, even though I wasn’t familiar with this particular beer with the odd name Rood Bruin.

Petrus is a line of sour ales from Brouwerij De Brabandere of Belgium.

Rood Bruin is a blend of 67 percent young brown beer and 33 percent of what the brewery calls “foederbeer,” which is a pale ale aged for two years in foeders (pronounced fooders), or large oak barrels. The pale ale sours in the oak barrels.

It pours a lovely chestnut reddish-brown with a nice, creamy layer of foam.

The label indicates this beer rates a three out of five on the brewery’s sourness scale, so I prepare myself for the pucker. But it’s not there. I would rate this more of a one on a scale of sourness going to five.

It’s a very mild sour with what I believe is a hint of crystal maltiness. There is also a slight spiciness that I am going to guess is the Saaz hops coming through.

And I just realized I have had this beer before when it was sold under a different name, Oud Bruin, which means “old brown.” I believe “rood” means “red,” so I guess the brewery decided that Red Brown sounds better than Old Brown. Plus, oud bruin is a traditional style of Flemish beer, so the name change sets it apart from all the other oud bruins out there.

At 5.5 percent, it’s an easy-drinking brown – one I would love to have fresh from a tap in West Flanders someday.

Better yet, I’d love to try a blend of 67 percent aged pale ale and 33 percent young brown ale to bring the sourness more to the front, but also fresh from a tap in Belgium rather than a bottle I found on a shelf in a Wisconsin bottle shop. Oh, well, dreaming is still legal.