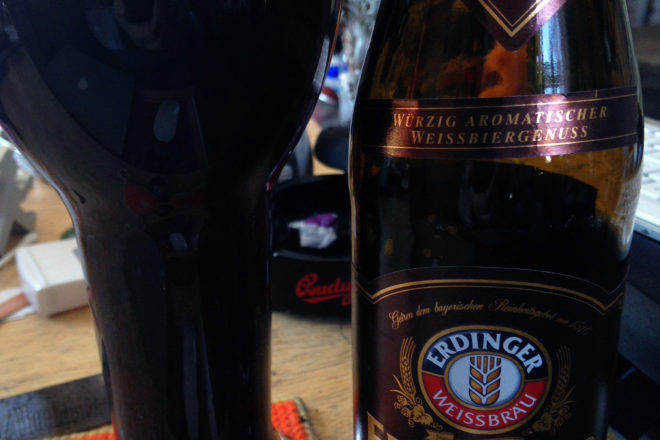 After an aborted bike ride due to not enjoying having to ride through walls of lakeflies, I needed something to cleanse the palate of macerated lakeflies (couldn’t help getting a few in my mouth, ears, eyes, nose, hair, jacket, etc.).

When I get home and open the magic fridge, the perfect beer reveals itself to me, shining on the shelf just like I imagine the Madonna glows when religious fanatics see her – a bottle of Erdinger Dunkel Weiss.

This is a very classy and refined dark wheat beer from the Bavarian brewery. Soft, smooth, silky.

When you think Bavarian brewing, it’s usually safe to believe Erdinger Dunkel Weiss has a deep history, but, in fact, it has only been brewed since 1989, when the master brewers created it as a birthday present for brewery owner Werner Brombach, who liked it so much he wanted to share it with the rest of the world. It became available commercially in 1990.

The brewery actually began in 1886 as the Weisse Bräuhaus in the town of Erding. The Brombachs became owners in 1935, and in 1949 Franz Brombach renamed the brewery Erdinger Weissbrau.

As the name says, they specialize in wheat beers, but that doesn’t limit them to the traditional wheat lineup. They do a wheat Oktoberfest, a wheat bock called Pikantus and a winter warmer called Schneeweisse – all worth seeking in their particular seasons.

But this dunkel is in a class of its own. The taste is the very heart of brown – maybe a chocolate brownie, a mild coffee, molasses, but all of them combined and condensed into the very essence of brown.

The thing is, these brown flavors are so subtle that you must have a very fleet palate to catch and identify them. They are there and gone before you can fully grasp them, so you take another sip, with essentially the same result – a wisp of this or that brown flavor, and gone. Some brown breadiness in there. Is that black licorice, which, technically is not brown but does fit in my brown tastes category. But, again, subtle.

And on the very end, a tingling spiciness, but, again, subtle.

Yeah, a little dunkel will do ya.