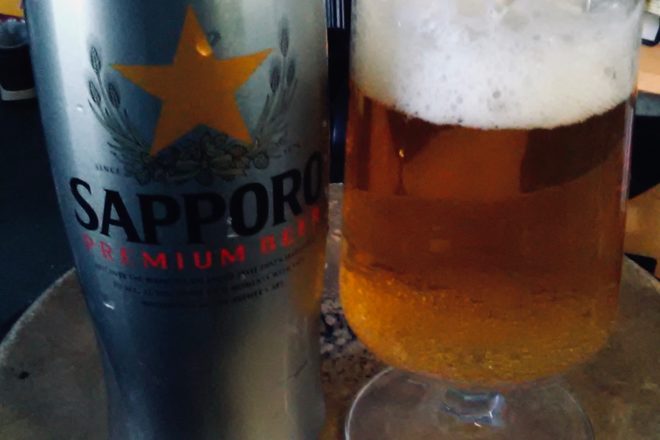 I’m sure I’ve mentioned before how much I like a good lager, and I’m probably also repeating myself when I refer to my fondness for Japanese lagers, but it bears repeating, I think.

This fact made itself apparent on a recent Saturday afternoon when I saw a silver bullet of Sapporo Premium Beer looking down at me from a shelf. The magic fridge had just recently been replenished, so I wasn’t even thinking about beer when I was at the store. I was there for salad fixings – kale, hemp oil, beets, sunflower seeds.

But walking past the Sapporo was impossible. It was like seeing an old pal, and it was time to be reacquainted.

I became a fan of Japanese lagers in the 1980s when I lived on Maui and suddenly had access to beers from Japan, the Philippines, Australia and New Zealand. I enjoyed the beers from all those places, but I grew especially fond of Japanese lagers. They seemed to me to be about as close as you’re going to find to a great German lager outside of Germany, and with more depth and substance than anemic American lagers.

So, it was not surprising to eventually learn that Sapporo brewmaster Seibei Nakagawa left Japan at the age of 17 and ended up in Germany, where he learned the brewing craft from masters. He returned to Japan, and in 1876, he became the first brewmaster at Sapporo, which today reigns as Japan’s oldest brewery. Four decades later, in 1917, rival brewery Kirin hired a Wisconsin maltster of German heritage, August Groeschel, to teach Kirin the art of brewing lager. It’s been a while since I’ve had a Kirin.

Out of Sapporo’s silver, can you get a beautiful, golden beer with a bone-white head. The taste is crisp and malty sweet, with a bright hop finish. It is a great, refreshing and satisfying lager.

In 2016, a lawsuit was filed against Sapporo for misleading consumers by claiming that the Sapporo sold in America is imported from Japan, when, in fact, it was being brewed in La Crosse, Wisconsin.

On the 22-ounce can I bought, Sapporo Brewing Co. of La Crosse is listed as the importer, but below that it says the beer was brewed and canned in Vietnam. Does any of that diminish the effect of this lovely lager’s flavor? Iie! (I’m told that means “no” in Japanese.)