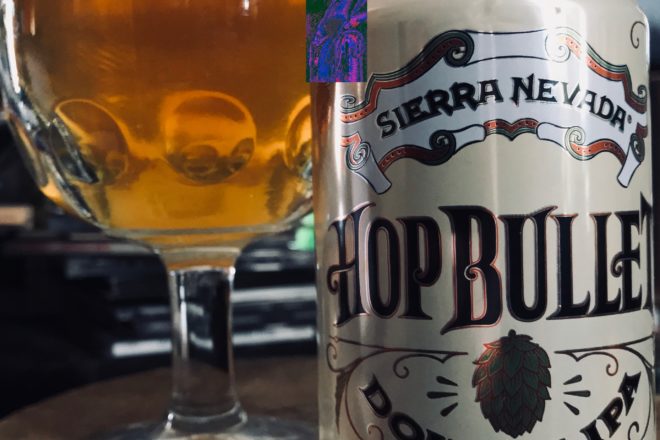 A giant hop aroma burst out of Sierra Nevada’s Hop Bullet Double IPA when I poured it into my old Pabst Blue Ribbon beer chalice.

Seven varieties of hops are used in the making of this beer, including what the brewery describes as a new technique of “hitting the beer with a one-two punch of Magnum hops and lupulin dust – pure, concentrated hop flavor – directly into the tank to emphasize the intense pine and citrus flavors of classic West Coast hops.”

The result is an 8 percent, 55-IBU double IPA that pours slightly hazy and orange-tinted and packs a bold hop flavor with a grassy finish. The big grain bill helps to tame the inherent hoppiness, but the hops definitely put their stamp on this Hop Bullet of a beer.

Despite the imposing name, it’s not freakishly hoppy. It’s an easy-drinking double IPA and another fine entry from this venerable brewery.

I decided to stick in the pale ale category by next cracking open a Guayabera, a Citra pale ale from Cigar City Brewing of Tampa, Florida, gifted to me by a part-time Florida resident.

It, too, poured a hazy orange color, with a resilient, pure-white head. In short, it has a lovely and inviting appearance. Makes you want to dive right in.

A limey grapefruit aroma bites the nose – a salute from the Citra hops used exclusively in this pale ale.

When first bred in 1990 from a lineage that included Hallertau Mittelfrüh, US Tettnang, EK Goldings and Brewer’s Gold, Citra was known as X-114. When it was first released commercially in 2007 as Citra, the world beer scene was forever changed by this interesting addition to a brewer’s tools.

As with every other Cigar City beer I’ve had, Guayabera is well made and highly quaffable. The citrus and berry flavors that the hops impart to this American pale ale make it extremely refreshing and drinkable – so much so that you hardly notice it weighs in at 5.5 percent.

FYI: The Guayabera is a four-pocketed summer shirt that Cuba recognizes as the “official formal dress garment.”

I would love to drink a Guayabera in a guayabera.